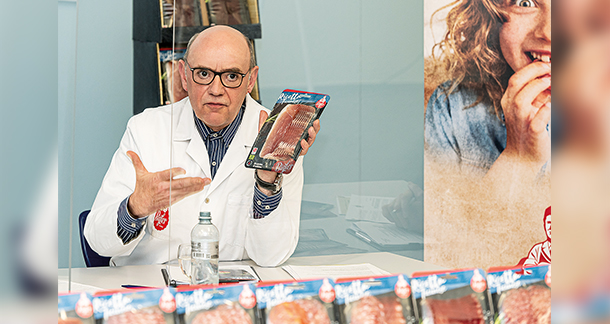 After finalizing a successful project across European borders, Swiss meat manufacturer Bigler (www. bigler.ch) now relies on the brand-new, paper-based FlatMap® solution for its sliced meat. Packaging equipment manufacturer SEALPAC, together with packaging materials suppliers Buergofol and Van Genechten Packaging, found the right partner in Bigler to develop this new packaging concept, which has now been launched at Swiss retail. More resource-saving, more eye-catching and more user-friendly is what summarizes the result.

The Swiss family company Bigler AG, with 700 employees and a total of six plants at three different locations, has its headquarters in Büren an der Aare and has been around for 75 years already. Under its motto “Ä Portion Tradition,“ Bigler supplies retailers and butchers in Switzerland under private label, as well as under its own Bigler brand. Always open for new ideas, the company became a pioneer in 2017 by launching skin packaging based on cardboard carriers, also known as FlatSkin®. As such, Bigler paved the way for paper-based skin solutions on the Swiss market, which have since become the new standard.

By introducing FlatMap® within its business unit Charcuterie, the company is now launching another true innovation. This reclosable, largely fiber-based, completely flat, and recyclable packaging system for sliced meat consists of an FSC-certified cardboard carrier that can be printed on both sides. The carrier has been coated with a thin plastic layer, on which the sliced meat can be served appetizingly. The product is sealed with a highly transparent top film, which can be removed from the cardboard carrier before consumption. Afterwards, the film is easily placed over the product again, where the edges are pressed against the carrier to provide excellent reclosability. The tight-fitting top film allows for less oxygen to enter the inside of the pack compared to common MAP  solutions. This prevents discolouration of the product whilst keeping it fresh and appetizing throughout the remaining storage time. After use, it is possible to completely separate the plastic and cardboard components, therefore allowing full recyclability of these materials. 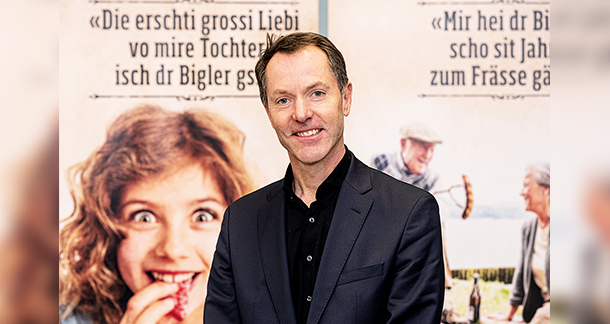 SEALPAC initially came up with the idea  of FlatMap®. Under its motto Forming Innovations, also related to its “GO sustainable!” initiative, the family company and leader in tray-sealing and thermoforming technology decided to develop the idea into a contemporary packaging solution. Several years ago, SEALPAC already entered the market with FlatSkin®, an innovative, paperbased skin packaging solution. From project discussions with customers, it became clear that similar solutions were also being sought for products packaged under MAP. Together with its proven partner Van Genechten Packaging, the basic idea for FlatMap was born®. Buergofol joined as a suitable film partner. The project was presented to Bigler AG in Switzerland, which  had already used a number of SEALPAC innovations before. Markus Bigler, CEO at Bigler AG, explains: “The idea of FlatMap® came at the exact right time. It became our joint goal to combine characteristics such as product protection, high barrier,  recyclability, low packaging weight and reclosability in one of the most sustainable packaging solutions on the market.” 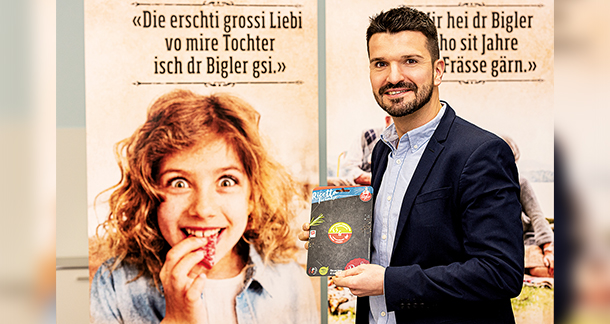 Reliability in all steps of the process

In achieving that goal, the project partners had to overcome several challenges. When using a cardboard carrier with FSC certification, the challenge is to maintain the shape of the carrier holding the chilled products, as this material is particularly sensitive to moisture. Cardboard specialist Van Genechten Packaging was able to demonstrate its know-how, also obtained from the previous FlatSkin® project. For example, the material used for FlatMap® is characterized by stability and durability throughout the entire process chain. In order to rule out microbial risks, only virgin fibers are used.

Since an absolutely flat carrier is required for the packaging process, as well as for the presentation at retail, Van Genechten Packaging developed guidelines for its customers on how to optimally handle the cardboard carrier. The carrier can be printed in highquality offset using low-migration printing inks and varnishes. This gives manufacturers like Bigler a lot of creative freedom for an attractive presentation, to highlight their product at retail.

After printing, the cardboard carrier is coated with a thin plastic layer, which provides a reliable barrier against moisture, fat, and oxygen. Film partner Buergofol was faced with the challenging task of developing a liner that adheres well to the cardboard on the one hand, but can still be easily separated later for recycling purposes. The company chose a polyolefin-based and therefore recyclable material. For meat manufacturer Bigler, a reliable reclose function of the packaging was an absolute must. The development work of film specialist Buergofol resulted in a top film that shows a consumer-friendly opening behaviour, but  at the same time provides excellent reclosability. In addition, it had to be ensured that the liner of the cardboard carrier does not come off with the top film when the packaging is opened, but only when it is pulled off with the recycling tab. Last but not least, Buergofol made sure that the thickness of both liner and top film was reduced to a minimum.

At Bigler, the FlatMap® packs for sliced meat are produced on a SEALPAC A7 traysealer in double lane execution. In general, the new packaging system can be reliably produced on all SEALPAC traysealers with FlatMap® preparation, currently from the A6 up to the A10. This preparation implies the use of SEALPAC’s patented transport system to allow for optimal handling of the flat carriers on the traysealer, as well as the use of a suitable vacuum and gas system for consistent modified atmosphere  ackaging. Combined with high-quality servomotors, which provide excellent drive coordination, these traysealers, such as the SEALPAC A7 used by Bigler, are energy- efficient and thus make a further contribution to greater sustainability in the manufacturing process. 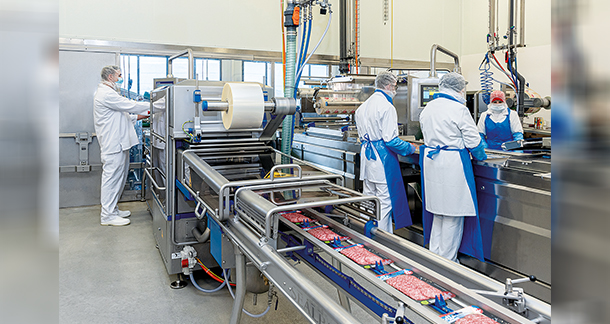 FlatMap® was developed to allow for full recyclability. The result is convincing: the plastic content of the packaging has been  reduced by around 70% compared to conventional MAP solutions. The polyolefin-based liner is easily separated from the cardboard carrier after use. All packaging components are then disposed of separately in their appropriate waste collection. The plastics can be reliably filtered out in the recycling process by nearinfrared technology. With these characteristics, FlatMap® already meets the EU requirements for 2030 with regard to the recyclability of packaging. Bigler had the improved ecological properties of the FlatMap® packaging confirmed in a professional study. Compared with the best competitor products available on the Swiss market, FlatMap® performed significantly better in terms of CO2 footprint. Gérard Bigler, Head of the business unit Charcuterie, explains: “FlatMap® also makes a contribution to less food waste, thanks to its excellent reclosability, which keeps the contents of the packaging fresh down to the very last slice and protects the product against premature spoilage.” 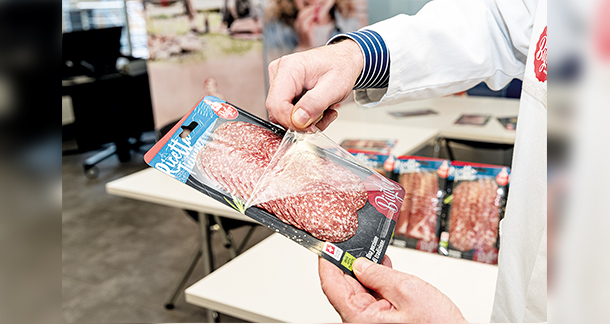 FlatMap® ensures a strong presence at retail due to its optimal branding possibilities. “FlatMap® offers us a lot of space for  communication and branding, because the cardboard carrier can be attractively printed on both sides and be used for various types of information. Presented standing, hanging, or lying down, it is always a real eye-catcher thanks to its entirely new look and full visibility of the product”, says Vittorio Ranaldo, Head of Marketing and Communications at Bigler AG. Since the  packaging is extremely flat, it can also be placed in larger quantities on the retail shelves, thus ensuring efficient transport to and storage in the supermarkets. The consumer, on the other hand, benefits from improved functionality. The top film, which is removed from the cardboard carrier before consumption, can afterwards easily be pressed down again onto the completely flat carrier for a secure reclosure, so that the remaining content does not have to be repacked, but can be safely and conveniently stored in the refrigerator. 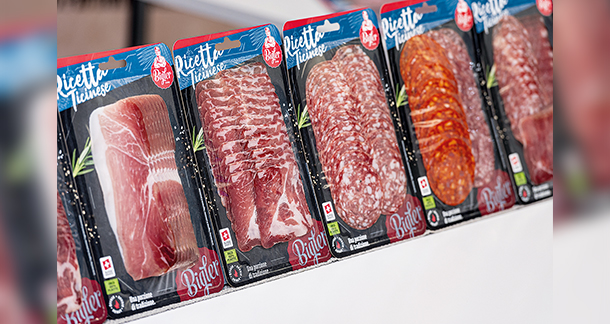 Meeting the requirements of the EU plastics strategy

With FlatMap®, the project partners have been able to create a completely new MAP system for sliced products that already fully meets the requirements of the new EU plastics strategy for 2030. This sets new standards at retail. All parties involved are extremely satisfied with the result of the project, which is an excellent example of cross-border teamwork. As such, they were able to bring a future-oriented packaging solution to the market, which is a real innovation in terms of opening, reclosing, saving resources and presentation. The companies agree that the cooperation will continue and have already identified starting points for further development.