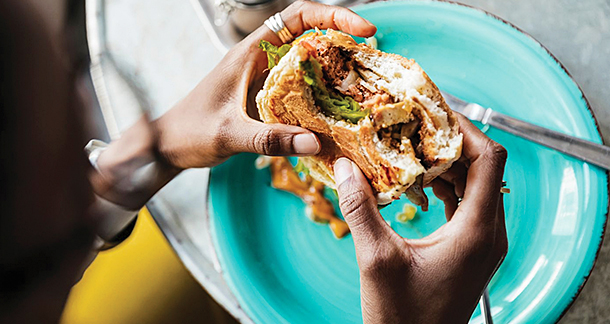 What is plant-based meat? Plant-based meats are meat-like products that are expected to have the same taste, texture, and experience as that of animal meat and made from plant-based ingredients. So basically, plant-based meats replicate real meat, except for the fact it does not use animal meat. They are also called mock meats, meatless foods, meat analogues and faux meat.

Animal meat, is primarily muscle tissue, is made up of protein, fat, vitamins, minerals, and water. Plants do not contain muscle tissues, but they do contain nutrients like proteins, carbohydrates, fibres, fat, vitamins, and minerals which can be used to create mock meats.

Plant-based meat products have zero cholesterol, and the protein content is near about same as that of regular meat. They ensure public safety and sustainability. These products are manufactured in a cruelty-free environment. Plant nutrients can also offer protection against potentially harmful compounds in cooked meat. These products also help in reducing Green House Gas emissions.

The global plant-based meat market reached USD 8.6 billion in 2020. Beyond Meat (US), Impossible Foods (US), Boca Foods Company (Kraft Foods, Inc., US),Gardein Protein International, Inc. (Conagra Brands, Inc., US), Maple Leaf Foods (Canada), The Vegetarian Butcher (Netherlands) are a few key players in the global market. At the global level, we see the shift of consumers to plant-based food products as processed meat industry is a big contributor to greenhouse gas emissions and hence plant-based diet is being promoted. Per capita consumption of meat in Europe and USA ranges from 40-60kg per capita which is very high. Europe dominates the plant-based meat sector as its population consists of health-conscious consumers who are shifting towards vegan, non-GMO, clean label, and natural products. The presence of significant research and development facilities that are involved in innovative product development has also made this region rule in the meatless sector. North America is also an active region in the meatless sector. Consumers in North America are interested in vegan and clean-label products, due to which market growth is observed in this region as well. Currently, USA is recognised as the powerhouse of the plant-based meat industry as there are large no. manufacturers in this region.

The meatless market in India is driven by health-conscious consumers and a flexitarian population. Currently, the Indian plant-based meat sector is in a nascent stage. Product choices and Indian dishes are very different from the west: people crave chicken tikka, butter chicken, tandoori chicken, and kebabs than burgers. The consumption of red meat is also low in India (only 4.5 kg per capita) compared to western countries.

Companies in India are still in the developing stage, but few leading companies in India like GoodDot and others are keeping a wide view and consider global players like Beyond Meat and Impossible Foods as competitors. These companies are trying to bring a gradual change in consumption patterns. By introducing plant-based meat products these companies are not only enriching one’s diet but also taking a step in conserving the environment.

Key players in the Indian market

The key players in the Indian market are GoodDot, Vezlay, Ahimsa Foods, Wakao Foods, Blue Tribe Foods, Mister Veg. There are many other start-ups in India like Greenest, Plantmade, VegetaGold that are doing well in the market. Some of the start-ups are in the research phase and would launch their products in the market very soon. India’s food processing sector is one of the largest in the world.The sector’s primary industries include the processing of grain, sugar, edible oils, beverages, dairy products, fresh fruits, poultry, vegetables, meat, and fishery products. This built-in capacity and experience in processing plant ingredients has inspired many Indian processors to produce plant-based meat substitutes over the past few years.

GoodDot, a leading player in the Indian market has anticipated a 250% year-on-year growth for 2021; it serves nearly 100,000 meals a day through its various product lines. GoodDot also exports its products internationally. Blue Tribe, which received a very good response from the market is expanding its portfolio of meat alternatives with a new line of vegan chicken and pork sausages; products will be made available in major cities. Greenest’s Green Meat Pounder, a plant-based meat burger is priced on par with its chicken counterpart. Burgill, a homegrown QSR chain has associated with Greenest Foods and has introduced The Green Meat Pounder. “Imagine Meats,” a company founded by Bollywood couple Ritiesh Deshmukh and Genelia Deshmukh also launched its products recently in Mumbai. Bollywood star Shahrukh Khan announced its launch. B-Veg Foods has launched plant-based sausages across 24Seven convenience stores in North India. BVeg is also prepared to present its unique product concepts and B2B services on a global platform.

Types of products available in the Indian market

Consumers in India view plant-based meat products as highly innovative, healthy and environment friendly. Products available in the Indian market are mostly homegrown, with a few imported products being launched in recent times. Products by Beyond Meat, a key global player are also available in a few Indian cities, at select retail stores and on Urban Platter, an online healthy grocery store.

Among plant protein ingredients, soy and wheat proteins have been chiefly used in plant-based meat. However, soy proteins are considered ideal in meat analogue products as they imitate the meat-like texture and have a good protein value.  Soy protein isolates and concentrates are generally used in sausage, burger, and muscle like meat analogues. Defatted soy flour has a protein content of 50%, high water binding capacity and fat retention functionality, due to which it provides a better meat texture and acts as a binder. It is used in burger patties, minced meat analogue and sausage type products. It is also used to make isolate and concentrate through a process called fractionation. Other plant proteins such as pea, mung and potato are gaining traction for use in plant-based meat.

Wheat gluten which has 75-80% of protein has water and fat binding capacity and emulsification functionality. It gives a firm texture after thermal processing due to which it is used in most meat-analogue products.

Legume proteins from pea, chickpea, mung bean, fava bean and other types of beans have been examined for their functional properties, such as emulsification, foam stabilisation and gel formation. Amongst these, pea protein gained a lot of attention since it can be used in several forms in meat analogue products. Pea protein isolate has approximately 85% of protein and can be used in burger patties, minced meat, sausages, muscle-type products, as it gives firm texture after thermal processing like wheat gluten. Often hydrocolloids are added in pea protein containing meat analogues as pea-based structures were found weaker than their soy-based counterparts. Proteins from lentil, lupine and fava bean have weaker gelling capacity than soy, which is why they are not used majorly, but on the other hand mung bean and chickpea proteins show good gelling properties and are therefore promising for meat analogues.

FSSAI and the Government are encouraging the consumption of vegan products. FSSAI recently released guidelines under the ambit of the EAT RIGHT movement. The Government of India fully endorses and supports a sustainable plant-based diet. The government is supporting the research and development of cultivated meat, also known as “clean meat.” FSSAI has also launched a vegan logo for vegan foods. There are no separate regulation/s or guidelines for plant-based dairy or meat products in India; however, plant-based meat products should be labelled and packaged with full disclosure about the origin (i.e., plant-based), and features. The government has allowed 100% FDI in marketing of food products; this and other food sector reforms will help growth.

Challenges in the meatless sector

Challenges that plant-based meat products are facing in India is that currently there are limited R&D facilities for plant-based meat producing companies, because of which the taste, texture of plant-based products does not match conventional meat products. There is a need to boost taste and texture of plant-based meat through R&D investment. Investments in the protein purification sector are required so that the proteins can be better extracted and used to develop new products with improved quality. Meatless products are more expensive than conventional meat. Production costs need to be lowered to enable affordability. Increasing awareness of meatless foods, beyond the urban markets (to rural markets etc.) will be a key challenge for the market participants and establish a strong footing in the ever-growing Indian food processed industry.

Opportunities in the meatless sector

Consumers are willing to spend more on innovative, healthy, and trendy foods. The health-conscious group is increasing and demand for the healthy plant-based meat is expected to rise. Growing number of youngsters and middle-aged population who are ready to try new, trendy, and nutritious products will mark a big success in the meatless sector. The guilty meat-eating population who would not eat meat at home but will eat out for various reasons will be benefitted as they can take plant-based meat home and cook it.

The Indian population is embracing healthier foods and plant-based lifestyle. Plant-based meat products are identified as immune boosting products and hence demand for these products is rising. Since India has a high population of guilty meat-eaters, this sector has a huge market base. Growing focus on nutrition and fitness is also increasing demand for healthy food products. Greater awareness about the harmful effects of consuming too much processed meat and adoption of healthier lifestyles would help meatless products be a good success story. Promotional and marketing campaigns attract a wider audience and should be undertaken. Consumers would be tempted to try these products at food outlets and QSRs which feature these in their menus. The meatless sector in India is currently in its infancy but poised for good growth and is expected to have a big share of the food pie in the next few years. By overcoming the challenges and leveraging on opportunities, plant-based meat sector has the potential to grow in the coming years.