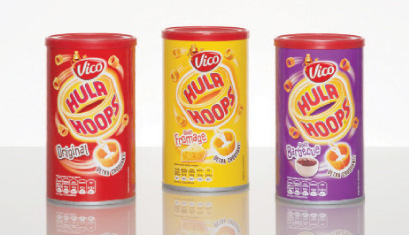 When it comes to products for quick and on-the-go snacking, the right packaging makes a difference. The French snack giant Vico relies on rigid paper containers from Sonoco Europe for the introduction of the ring-shaped, three-dimensional Hula Hoops snack to the French market. The handy containers in three distinctive colors, one for each flavor, stand out at the point of sale (POS) with their trendy design and satisfy customers’ demand for convenience and freshness with their aluminum lining and reclosable snap lid.

Founded in 1955, the Vic-sur-Aisne based brand Vico has decades of experience when it comes to savory snacks. Potato, dough, rice and nut snacks have allowed the company to establish itself as one of the major snack producers in France. The latest addition are Hula Hoops, small ring-shaped snacks made from potato dough. Based on one of the most popular British snacks, Vico’s Hula Hoops set out to conquer the French market in 2016 with three popular snack flavors: Original (salted), Cheese and Barbecue. The potato snack is available in all major French supermarkets in a 115-gram rigid paper container.

A packaging that stands out and preserves taste

Thanks to their package design, Hula Hoops stand out at the POS: Each flavor has its own distinctive color. The all-around label shows stylized yellow Hula Hoops in motion, reflecting their intended use – on-the-go consumption – while the reclosable snap lid in classic red echoes Vico’s brand color. “The high visibility of our rigid paper containers is one of their key features,” said Séan Cairns, Vice President and General Manager with Sonoco Consumer Products Europe. “Having a packaging that stands out on the shelf is a crucial advantage, especially when it comes to introducing a new product to the market and attracting impulse buyers – which is of the utmost importance on the highly competitive snack market.”

More than just a pretty face, the aluminumlined container, with a diameter of 83 mm and a height of 150 mm, also preserves Hula Hoops’ freshness and flavor. Once the container has been opened, it can easily be closed again to retain the snack’s crispiness thanks to the reclosable snap lid. Particularly for on-the-go snacking, consumers benefit from being able to close the container again easily.

A strong partnership on the European snack market

Hula Hoops are the latest result of a long and successful cooperation between Sonoco and Vico’s parent company Intersnack, which have worked together for years to introduce savory snacks in attractive packaging to European markets. Hula Hoops have been available in French supermarkets for nearly a year. After the successful introduction, Vico is already planning to soon add two new flavors, Bacon and Sour Cream & Onion, which are very popular choices among snack fans.