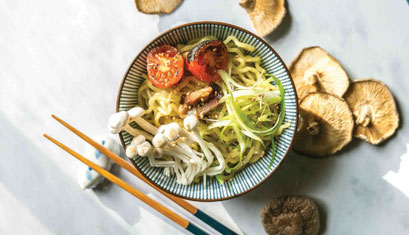 Ever wondered how ‘Indian Chinese’ cuisine overwhelmed India that now it is served in every corner of this country? Well the answer to it is that we Indians love ‘Umami’ taste. As kids we are taught about sweet, salty, bitter, sour as basic tastes. These tastes aren’t challenging to identify. But ‘Umami’, the fifth basic taste is slightly complicated to distinguish than the rest.

Some examples of food high in Umami are- Soy sauce, meat, fish, tomato, tomato ketchup, pizza, pasta, Indian curries (butter chicken, dal makhani, etc.) and many more. Umami taste is known to give a feeling of satisfaction, satiety after eating. Umami can truly be identified as the taste of ‘Yummy’!

It was a quite tough time for this taste to get scientific and social acceptance. Umami received scientific recognition in 1985, almost 77 years after it was first discovered by Kikunae Ikeda, who was a Japanese professor in 1908. The term ‘Umami’ comes from the Japanese adjective for delicious (umai). Even after getting recognition, umami was labelled as fifth basic taste in 2000 when an umami taste receptor of the brain was discovered.

There are several compounds which trigger the umami taste receptors. One such main compound is Glutamate (salt of Glutamic Acid). However, glutamate alone cannot produce sufficient flavour of umami, and so it arises from the synergy of glutamate and nucleotides (L-Glutamate, 5’-ribonucleotide) such as Inosinate (IMP) and Guanylate (GMP). IMP and GMP do not cause umami of their own. Our foods are often rich in glutamate, inosinate and guanylate. They are present in every living thing and are central to biology on the planet.

Glutamate is salt of non essential amino acid- Glutamic acid. Glutamate is present in food ingredients in either free form ( Free Glutamic Acid) or in bound form (Glutamate bound to proteins). Bound form is tasteless and does not elicit umami response. For triggering an umami response, protein hydrolysis of bound glutamate is required.

MSG is nothing but sodium salt of Glutamic Acid. It became popular all around the word as ‘flavour enhancer’ (E number 621). In India, right from restaurants to FMCG companies started using MSG. Increased usage of MSG initiated a debate on its safe usage without toxic side effects. The Food Safety and Standards Authority of India (FSSAI) banned ‘Maggi’ noodles, the most popular consumer product in India owing to high content of MSG. Later, FSSAI issued an order allowing the use of MSG considering good manufacturing practices being followed and that the consumers should be well aware of what they are consuming. Such decision was made as there is no analytical method to determine whether flavour enhancer is naturally present in the product or is added. Despite a lot of controversies over use of MSG, it is still ‘generally recognized as safe’ by the FDA.

India being a country of people who are born foodies, this taste has been an essential part of our cuisine unknowingly. Our Indian spices, the ‘tadka’ that’s given to our food mainly consisting of asafoetida is a major contributor to umami. Apart from tomatoes, using onion and garlic have known to give umami to food.

Recently not just researchers but gastronomists have taken interest in promoting this taste. Chefs and cooks are able to express the unique characteristics of umami taste accurately. Researchers and cooks have collaborated in broadening the knowledge of this taste. Yet, even  113 years after the discovery, this taste is still unknown to a lot of people in society. Sensory analysis is a field demanding utmost precision and thorough knowledge of the food chemistry. Umami being a base for most foods we consume, using umami rich ingredients will help attract a lot of consumer attention in the commercial food market as well as in household cooking. Looking at the evolving taste and likings of people around the world, there is ample scope for students to research in this branch of food science.