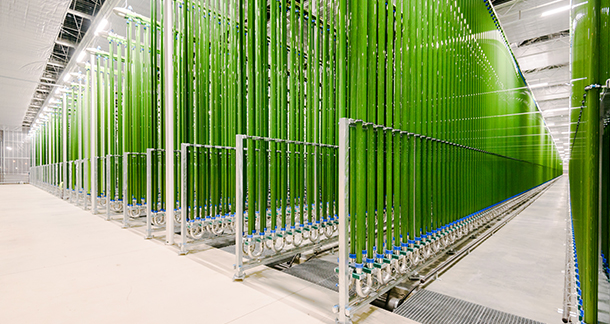 Amid extensive media coverage in 2018, one of the largest and first closed, year-round microalgae cultivation facilities in the world was officially opened in Bruck an der Leitha in Lower Austria. The photobioreactor system developed by Austrian-based ecoduna, which consists of 43,000 6-meter high glass tubes, is designed to produce roughly 100 tons of ultrapure algae powder annually. With its high concentrations of high-grade vegan omega 3 and omega 6 fatty acids, natural color substances and micronutrients, plus essential amino acids, microalgae is considered a highly-sustainable and resource-efficient raw material of the future, particularly for the food industry. One of the key issues during research and development was the creation of an industrial-scale production infrastructure, which required an automated system for controlling the biological growth process. Over the course of the project, Endress+Hauser proved to be a highly-engaged, persistent partner. At that time still a startup, ecoduna was supported from the very beginning by the measurement technology specialist with both high-quality sensor technology and comprehensive expertise in the area of pH value and optical density (OD) measurements, two relevant pieces of the patented green technology puzzle.

Franz Emminger and Mag. Martin Mohr, ecoduna’s two founders, originally wanted to produce biofuels from microalgae. The underlying idea was, and still is, to provide the green single-cell organisms constant and optimal photosynthesis conditions (light, CO2 and nutrients) and thus be able to continuously and systematically cultivate and produce large quantities of high-quality biomass. After tinkering with this project for a number of years, in 2010 they molded their idea into a business model and ventured step- by-step into independence with the support of private investors.

The Austrian company has since steadily enhanced and fine-tuned the production processes and safeguarded the technology through global patents. As early as 2012, the company put the demonstration and research facility in Bruck an der Leitha into operation, enabled intensive process tests and created a basis for the technical and commercial maturity of the system. ecoduna was acquired at the end of 2020 by a private, Netherlands-based company active in the cultivation of organic plants and renamed Jongerius ecoduna GmbH. The initial plan is to concentrate on the European sales market. 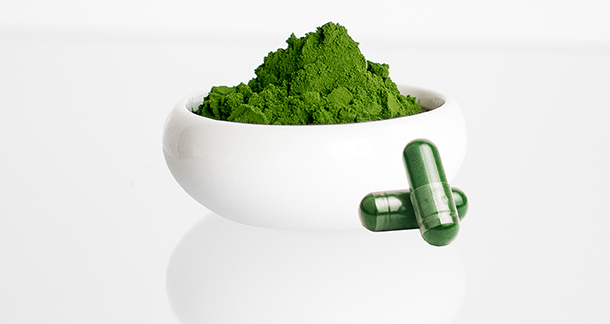 “We produce our algae the way nature does, just not in a horizontal flow, but vertically,” explains Lukas Neuwirth, quality manager at Jongerius ecoduna.

“Microalgae are single-cell organisms that under ideal conditions, divide once each day through photosynthesis. That means they grow into high-grade biomass containing valuable substances faster than soil-based plants.” Optimal light conditions for cultivating the algae occur if there is neither too much (such as on the surface) nor too little (such as in deeper waters) light available. “In natural waters, this so-called photoactive zone is located several centimeters below the surface, but the zone itself has a depth of only about three centimeters,” says the expert in more detail. “With our vertically-aligned reactors, we simply rotate the photoactive zone 90 degrees to expand the available surface for the photosynthesis process.” The facility comprises 32 photobioreactors, each of which in turn is made up of around 1,400 vertically-installed, 6-meter long glass tubes that serve as the habitat for the “floating” microalgae cultures. Altogether, that adds up to an impressive length of 230 kilometers. No pumping occurs in the system. Instead, air is injected into the tubes to mix the algae suspension, so that all of the microalgae receive sufficient light, and also to transport CO2, selected nutrients (nitrate, phosphate and trace elements) and O2 as the only  accumulated ”waste”. “By making the shift from the polycarbonate profile elements that we used in the past, to the glass tubes, we were able to significantly increase the life cycle of the modules, and thus the productivity of the system,” says Lukas Neuwirth, making no secret of the fact that this decision, made roughly four years ago, was the breakthrough that led to economically-viable, large-scale production. “We produce a wide variety of algae. The single-cell organisms proliferate within an  enclosed and controlled ultrapure system, protected against external influences, which allows us to  manufacture high- quality algae powder for the food industry. This clearly sets us apart from competitors that often deliver heavily- contaminated “open-pond-quality” in uncontrolled cultivation conditions.”

Since the photobioreactor system operates 365 days a year, the cells divide once a day, thus doubling the number of microalgae in the ideal situation. That also means that each day, up to 50 percent of the total volume containing the regrown biomass can be harvested using cross flow filtration, centrifugation and spray drying. “Depending on the time of year, we utilize various strains of algae. In the summer we need more heat-resistant strains than in the winter,” explains Lukas Neuwirth. The cultures also age, which makes it necessary to change them every 10 to 12 weeks. “Although microalgae do not age, cells die and release substances into their  surroundings. The organic material from the dead cells act as a carbon source for bacteria. A system with dimensions like ours is impossible to keep sterile,” says Lukas Neuwirth, illustrating one difference between a real large-scale production environment and a laboratory test setup. And it’s exactly this capability to transform years of biological knowledge and technical knowhow into an industrial production process that distinguishes Jongerius ecoduna.

Economic feasibility is the one reason why the plant has to be largely automated. That’s why, parallel to the biotechnology processes, the automation technology was also developed with the aim of being able to control the growth of the protozoan with a maximum degree of efficiency.

“In a test environment, you extract samples manually and take them to the lab for analysis. In order to be able to automate this analysis process, we first had to define it, step-by-step. There was no state of the art, recalls Lukas Neuwirth, who was heavily involved in the development of the process. “That’s why it was important during this phase to find partners who understood that we  were unable to exactly formulate the requirements at the product level. That was immediately the case with Endress+Hauser. We carried out numerous tests to determine the suitability of a wide variety of sensors. During this phase, it was very helpful for us as a startup to have Endress+Hauser make numerous products available to us at no cost and provide us solid advice and valuable tips.”

Roswitha Schützner managed the project from Endress+Hauser Austria’s side. “The collaboration with Jongerius ecoduna was highly exciting and interesting from the very start,” admits the project manager for analysis technology in describing her personal enthusiasm. “I was impressed by the vision and the spirit of the young and motivated development team.” A lot of joint testing was carried out, which then resulted in a sensor standard that could be used to begin series production. “The two most important measurement parameters are pH and optical density,” reveals Lukas Neuwirth. “We can use the pH value to draw conclusions about the CO2 saturation and the optical density provides direct information regarding the algae concentration, and thus the cell growth.” This measurement data makes it possible to continuously sustain ideal growth conditions through targeted feeding of CO2 and other nutrients based on the current requirements of the microalgae at multiple points in the system. In concrete terms, each reactor has an inline »OUSBT66« near-infrared absorption sensor and a CPS11D pH sensor from the Orbisint series, both from Endress+Hauser. “What we really liked about the Endress+Hauser products was the possibility to measure directly in the reactor without a bypass,” adds Lukas Neuwirth. “We’re testing sensors from other  manufactures as well.”

The CPS11D pH sensor – the digital jack-of-all-trades for process control technology within the Endress+Hauser portfolio – is moisture- and corrosion- resistant, can be calibrated in the lab and enables predictive maintenance thanks to the integrated “Memosens” technology.

The OUSBT66 absorption sensor for monitoring optical density measures in the 860 nm near-infrared range, which means the performance is  unaffected by different colors of algae. The measuring principle is based on Beer-Lambert’s law, which relates the attenuation of light to the properties of an absorbent material through which the light is travelling. Furnished with an NIST-traceable and certified push-on filter, the OUSBT66 is especially easy to inspect and calibrate. Over the course of harvesting, CLS82D digital 4-electrode conductivity sensors are employed during cross-filtering of the water in the filtrate, which is then recirculated to the process. The signals from all three sensors are analyzed by a CM44P transmitter from Endress+Hauser, which supplies its data via Profibus to a control application employed by a system integrator using technology from Siemens.

Jongerius ecoduna was successful in harmonizing the biological and technological processes for the algae production system, thus making it suitable for industrial scale use. Lukas Neuwirth nevertheless sees plenty of additional optimization and research potential for even better cultivation conditions and is already looking forward to another sensor envisaged by Endress+Hauser. “The next thing we want to do is optimize the mixing ratio between recirculated and fresh water by measuring the organic carbon in the filtrate as a TOC value.”