Probiotics, Prebiotics, and Synbiotics: An Introduction 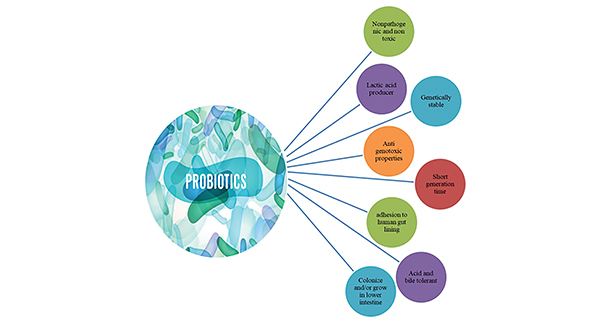 Food provides essential nutrients for the average growth and development of an organism. The age-old quote of Hippocrates, “Let food be thy medicine and medicine be thy food”, is the ideology of today’s health-conscious population. Changing lifestyle leads to consumption of processed food, but the concern associated with this is its composition and safety. In recent years, new aspects are opening new quests to study different food components in enhancing health and counteracting chronic diseases. In recent years, probiotics, prebiotics and synbiotics are receiving much attention in health, the scientific arena, and public awareness.

The word “probiotic” is derived from Greek, meaning “for life”. The latest definition, formulated in 2002 by FAO and WHO, is “live strains of strictly selected microorganisms which, when administered in adequate amounts, confer a health benefit to the host“. In 2013, the International Scientific Association for Probiotics and Prebiotics (ISAPP) accepted this definition. Clinical studies have shown a positive effect of probiotics on atopic dermatitis, gastrointestinal disorders, diarrheas, irritable bowel syndrome. Probiotics are also effective in treating many diseases such as non-alcoholic fatty liver disease, obesity, type 2 diabetes, insulin resistance syndrome.

Probiotics have numerous advantages in humans, among them the development of a proper balance between the beneficial microorganism and pathogens inhabiting within the host. Probiotics meetings the criteria are employed to restore the natural micro biota after antibiotic therapy. It also inhibits the development of pathogenic microorganisms, such as salmonella, clostridium, staphylococcus, Escherichia coli, entering into the human intestine from contaminated food and environment.

Probiotic microorganisms are a producer of the B group of vitamins. They also produce some enzyme cofactors (NAD, NADP, co-enzymes A, and Q) and some enzymes (esterase, lipase). Some products produced from probiotic metabolism may also show immunosuppressive, anti-carcinogenic and antibiotic (acidophiline, bacitracin, lactacin) properties.

Frequently used probiotics consist of bacteria, yeast, and mould. They are available in various forms, viz. liquids, capsules, packets, tablets. They are also available in many dairy products like yoghurt and dairy drinks. While preparing any probiotics, a few properties are to be considered (Fig. 1). Probiotics are used as a single microorganism or a mixture of several species. Bacteria dominate the probiotic formulation, and lactobacillus dominates the group among bacteria. Probiotic microorganism mostly belongs to the following genera: Lactococcus, bifidobacterium and lactobacillus. The most common microorganism used in probiotics are listed below: Lactobacillus group: rhamnosus, reuteri, casei, acidophilus, fermentum, lactus

The bacterial population (beneficial and harmful) constitutes a complex ecosystem in the human gastrointestinal tract. Using a dietary substance, prebiotic, can favour the growth of beneficial microorganisms over that of harmful ones. FAO/WHO defines prebiotics as a “non-viable food component that confers health benefit(s) on the host associated with modulation of the microbiota”. Prebiotics are primarily non-digestible fibres of food components. Biochemically they are disaccharides, oligosaccharides and polysaccharides. Prebiotics affects the host’s health by stimulating the growth of some genera of indigenous colon bacteria, particularly bifidobacteria and lactobacilli. Criteria have been established for using a substance as a prebiotic. 1) Should be stable against actions of acids and bile salts in the upper part of the gastrointestinal tract or by the activities of the enzymes in the intestine

3) Alter the flora of beneficial microorganism

4) Should be readily fermentable in the intestine by beneficial microflora

Prebiotics exhibit several health benefits to the host’s organism. Inulin and pectin like substances reduce the frequency and occurrence of diarrhea have positive effects against intestinal bowel disorder. Prebiotics helps enhance the bioavailability of minerals and lower the risk associated with cardiovascular disease. It gives a feeling of fullness, thus helping in preventing obesity. It has some therapeutic properties also like anti-carcinogenic, glucose modulatory, hypolipidemic.

Synbiotics are an amalgamation of prebiotics and probiotics. The purpose of using synbiotics is that when probiotics are administered alone, the chances of survival of microorganisms in the upper gastrointestinal tract are significantly less. It is due to the intolerance of microorganisms for Oxygen, low pH, and temperature, and to overcome the survival-related difficulties of probiotics. Synbiotics can be defined as “‘a mixture of probiotics and prebiotics that beneficially affects the host by improving the survival and implantation of live microbial dietary supplements in the gastrointestinal tract, by selectively stimulating the growth and activating the metabolism of one or a limited number of health-promoting bacteria, and thus improving host welfare”. Synbiotic foods help maintain the gut biostructure by modulating the gut metabolic activities.

Several symbiotic formulations have been developed. Probiotic strains used in formulations are Lactobacilli, Bifidobacteriaspp. Synbiotics are known for the health-promoting benefits, and they do so either by enhancing the viability of probiotics or delivering health benefits. There is an increase in methyl acetate, ketones, short-chain fatty acids if using synbiotics.

Microorganisms in the gastrointestinal tract are important for maintenance of micro biota in humans. Probiotic microorganisms have attributed many health benefits like type-2 diabetes, insulin resistance, lactose intolerance, irritable bowel movement. Prebiotics may be used as an alternative for probiotics. Development of bio-therapeutics formulations having appropriate microbial strain and synergistic prebiotic have been found more effective than their components administered alone. The use of products in oral care is gaining momentum, and growth in this sector is estimated at 7% annually. Still, there is a lot to discover about the mechanism of how probiotics and prebiotics modulate the ecology of the gut. The area of prebiotics and probiotics has extended the wealth of research into therapeutics and microbiome-targeted nutrition, leading to the emergence of new prebiotics and probiotics.

Markowiak, Paulina, and Katarzyna Śliżewska. “Effects of probiotics, prebiotics, and synbiotics on human health.” Nutrients 9, no. 9 (2017): 1021.