Nutrition VS Functionality – The Indian context for protein ingredients 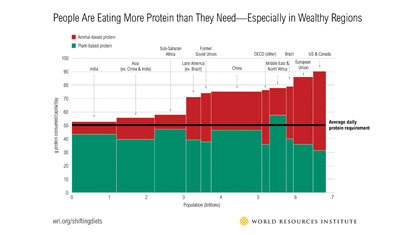 The macromolecules critical for a balanced diet are carbohydrates, proteins, and fats. Of these, there is an excess of carbohydrate and fat consumption, while proteins remain deficient. This is a general trend around the world and has led to a focus on the protein composition of diets. Increased protein consumption can be achieved through the balancing of different food groups or by fortification of processed foods with protein ingredients. Giract defines protein ingredients as those that exceed a protein content of 50%, typically ranging between 60 and 90%. These can fall into the categories of defatted flours, texturized proteins, concentrates, isolates, and hydrolysates. Individuals in India have traditionally achieved protein sufficiency from plant and dairy, rather than through animal sources. This is not only because of the large vegetarian/flexitarian population, but also because Indian cuisine does not place meat on the centre of plate. Even centre of plate dishes like a biriyani do not contain meat as a major component, with rice predominating the volume. In this context, evaluating the choices that individuals have for ensuring adequate protein consumption is necessary to determine the potential for protein ingredients in India.

A 1972 NSS report shows the average per capita consumption of protein being 62.7 grams per day. While Haryana topped this chart, states like Himachal Pradesh, Rajasthan and Delhi were ahead of the rest in being above 80 grams per day. Contrast this with the 2011/12 report which showed a decline to 60.7 grams per day. Haryana remained the topper in 2011/12 too. This survey also revealed that cereals contributed most to protein consumption (49-58% rural to urban). Milk was 10-12% and meat/fish/egg were 7-9%. The growth of dairy and meat/fish/eggs has been at the cost of cereals which have fallen from a high of 72% in 1993. The divide in nutritional intake is also seen between rural and urban populations, with urban populations faring better. Similarly poor households fare worse than relatively affluent counterparts.

Contrasted with a world resources institute data, the conclusion is that while India consumes proteins at an adequate level per capita, it lags far behind some of the developed countries. The proportion of meat/fish/eggs is also much lower than other parts of the world. 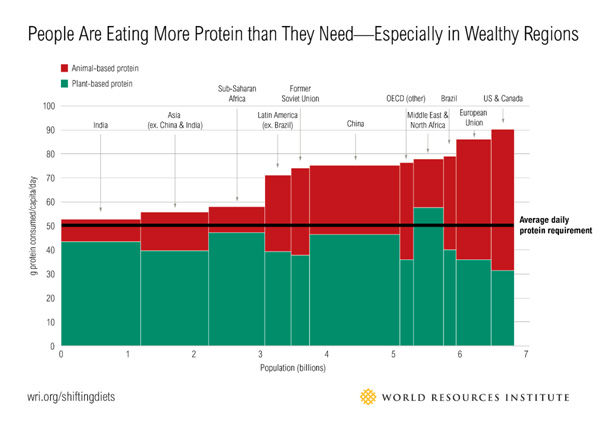 The conclusion is that there are sections of the population which are over nourished, and large swathes which remain under. The lack of access to high quality dairy and animal protein due to the twin reasons of price and availability is one of the reasons. While India is the largest dairy producer in the world, the per capita availability is very low. Similarly, while a vegetarian diet may be cultural, feeding 20% of the world’s population with animal proteins on par with the rest of the world threatens to destroy an already fragile food supply system as well as being environmentally unsustainable. The conclusion therefore is that plant proteins will remain the principal source of proteins in the Indian diet.

Giract estimates the total volume of animal/plant/dairy protein ingredients consumed in India in 2016 to be approximately 184kt. This works out to around 400mg per day per capita or, in other words an insignificant contributor to fortification of the diet of the majority.

One of the reasons is the high cost of protein ingredients. Dietary protein sources are significantly cheaper in providing protein.

In the above estimates, animal proteins stand out as being significantly more expensive in providing dietary protein, which supports the earlier reasons provided for meat not being popular in India. Protein ingredients as defined by Giract have a range of prices depending on source (soy, other plant, dairy) and type (texturized, concentrate, isolate, hydrolysate). Texturized soy proteins are priced between INR 65-75/kg with a protein content of 52%. This translates into INR 0.12 per gram of protein delivered. When moving up to isolates with more than 80% protein content, the cost of delivered protein works out to around INR 2.6 per gram, which inches closer to the cost of the cereals and pulses presented above. The key difference between using whole grains/cereals/pulses for protein delivery vs the ingredients is the synergistic benefit of the other components in the matrix, which the purified protein ingredients do not have.

A pan India survey – “the protein paradox” (righttoprotein.com) – revealed that mothers were aware of protein as an essential component of the diet. But they could not identify food components that were rich in protein and also believed a basic meal consisting of rice, dal and roti provided adequate amount of protein. Various public health surveys have revealed that simple diets, especially at the bottom of the economic pyramid, does not provide adequate protein.

Protein ingredients are both nutritional and functional. Texturized soy proteins can be used as meat extenders, while concentrates and isolates can be used in various applications like RTM powder beverages (protein fortification) or sausages (emulsification and meat extension). The use of these ingredients in India therefore is not restricted to creating protein rich foods. Since the cost of delivery of protein is comparable to whole cereals/pulses, it is necessary to understand the challenges of positioning these ingredients as nutritional components for most of the population. The primary challenge is production capacity – large scale processing of pulses and cereals do not happen in India. The second challenge is application in different matrices for which NPD efforts need to be faster and wider. The last challenge, which has been raised earlier in this article is that whole grains/cereals provide a variety of other macro/micronutrients which the ingredients do not provide. Hence the choice of the processed food matrix which is sought to be fortified is important. When production is scaled up in India, the price of the protein ingredients may also fall. Until these two are addressed, the use of protein ingredients may be restricted to high priced matrices targeted at specific urban/affluent populations.