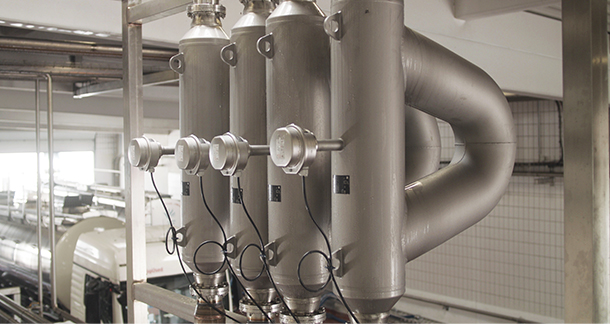 For many food manufacturers, raw materials accounting is a highly important and frequently discussed topic. The idea behind this thought is to measure the exact amount of delivered raw materials, such as milk, oil or alcohol, and then precisely allocate how much is used in each of the individual production steps. The goal is to provide as much as transparency as possible when it comes to the raw materials used in each and every product – such as cheese and butter at a dairy operation – and to be able to create full cost accounting. The Promass Q Coriolis-based flowmeter from Endress+Hauser offers food manufacturers a one-of-a-kind opportunity to optimize their raw materials accounting with innovative technology. 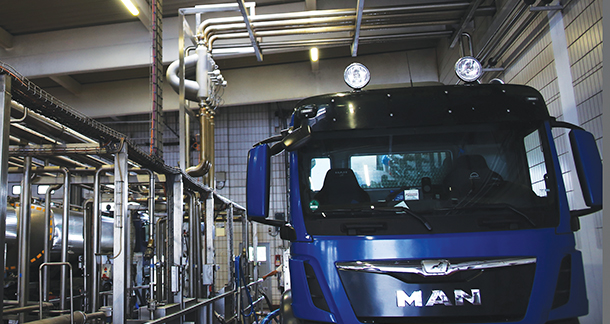 Volume and mass flow are two commonplace terms whose meanings can lead to very stark differences in materials accounting. In contrast to volume, mass flow exhibits a constant behavior when subjected to changing influences such as pressure and temperature. That’s why the accounting systems rely on units of mass in many cases. Many companies nevertheless use volume measurements, which can lead to unwanted differences in the raw materials accounts settlement. But even mass flow measurements have potential sources of errors that users have to take into account. In the field, one of the primary causes of measurement discrepancies relates to undetected air or gas entrainment in fluids, which distorts the measurement value and leads to differences in the raw materials accounts settlement. To prevent this from occurring, Meierei Barmstedt relies on the Promass Q, a Coriolis-based flowmeter that detects gas entrainment and lowers the measurement error ratio to nearly zero.

The dairy’s tank trucks make daily runs from farm to farm to retrieve the milk. Because the trucks are not full at the start of the run, the tank still contains a considerable amount of air. As the truck navigates curves, accelerates and performs braking maneuvers, the milk constantly swishes around in the tank and mixes with the air. This effect has an enormous disadvantage for dairy operators.
If volume flow is used as the measurement unit when the milk is retrieved from the farm, it leads to an exaggerated measurement, which in turn exaggerates the amount of raw milk delivered to the dairy. This is because the air has significantly increased the volume. In practice, an increase of 10 percent, or even 20 percent in extreme cases, is not uncommon. This so-called “milk overrun” has a negative impact on the finances. Assuming the air is purged during the production process, the dairy operator ends up posting a loss when settling the raw materials accounts. This also makes it difficult to create accurate full cost pricing.
With this in mind, instead of volume flow, many dairy companies use mass flow to measure the amount of milk that is delivered and processed during production. Coriolis systems, such as the Promass family of instruments from Endress+Hauser, have proven their worth in such applications for years now. Unfortunately, unwanted accounting differences can still occur even when Coriolis-based flowmeters are employed. As with volume flow, one of the reasons for this effect is air entrainment, which influences mass flow measurements as well. Although the effect is considerably lower, it still exists and can lead to deviations. When processing large quantities of raw milk like Meierei Barmstedt, small percentage errors add up to significant sums at the end of the year.

To eliminate discrepancies in the mass flow measurements, Meierei Barmstedt relies on the newest member of the Endress+Hauser Promass family – the Promass Q, an instrument that features the patented multifrequency technology. The Promass Q was designed to eliminate measurement errors induced by gas entrainment down to a level of nearly zero. The unique patented feature of the sensor is that the Coriolis tube oscillates within two superimposed resonance frequencies instead of just one, a major advantage over the conventional Coriolis measurement principle. Measurement errors caused by entrained gas can be virtually eliminated. In simple terms, this has to do with a physical effect in which the relationships between the two stimulated resonance frequencies equate to the relationship of the measurement errors induced by entrained gas in fluids. The oscillation of the two superimposed resonance frequencies means that both relationships – resonance frequency and error – are known. The instrument uses this information to determine the value at which this error ratio, which is tied to the entrained gas, is almost zero. It then adjusts the oscillation frequency accordingly.
Elimination of the measurement error caused by heavy gas entrainment has a considerable impact on the incoming supply of the raw milk. Compared to the processes available to date, the Promass Q allows food manufacturers to measure the quantity of incoming raw milk more accurately than with currently-available Coriolis mass flowmeters and as a result, significantly optimize the internal raw materials settlement even further. Accounts settlement with the dairy farmers is more accurate as well. 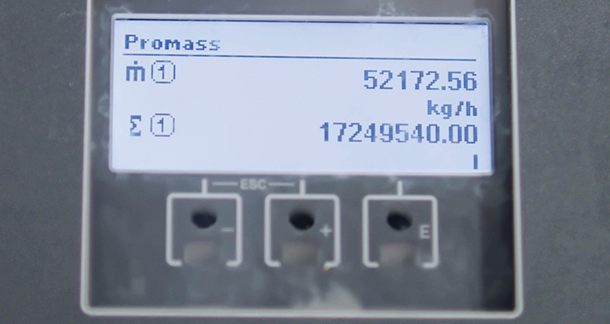 The Promass Q multifrequency technology not only makes it possible to eliminate mass flow measurement discrepancies with fluids. It can also precisely measure the overrun in other products where various gases are infused, such as cream cheese or ice cream. In this case manufacturers strive to create an especially light and fluffy consistency, such as in cream cheese.
In environments where experience served as the basis for entrained gas values and the amount of gas was adjusted after drawing samples – after all, raw milk is subject to certain fluctuations – overrun can now be measured with a high degree of accuracy. This in turn helps reduce fluctuations in the quality of the end product.
The Promass Q has repeatedly demonstrated its suitability for measuring overrun. Users were able to monitor and regulate the entrained gas levels in the process by means of density measurements, thus preventing off-spec batches or fluctuations in product quality.

Beyond the sensor with its multifrequency technology, the electronics is what makes it easy to integrate the Promass Q into existing systems. In combination with the new Proline 300/500 transmitter variant, the sensor is capable of forwarding the signals via a wide range of digital communications technologies such as Profinet, which also helps support the digitalization strategies for the production processes. In addition, the Heartbeat internal testing function offers a key way to simplify quality management. Companies that operate according to ISO 9001, IFS or other certification standards are frequently required to calibrate and/or verify critical easurement points. And this is precisely where the internal, TÜVcertified verification function comes into play. This feature determines the status of the instrument, with a likelihood of 94 percent, and delivers a clear indication of whether the device is still measuring within specifications or is experiencing problems. Users thus enjoy an even better way to document the traceability of individual batches while reducing the amount of red tape at the same time.
Promass Q – jack-of-all-trades The Meierei Barmstedt example illustrates that by deploying the Promass Q, demanding food manufacturing processes can be even more reliable and cost-efficient. Manufacturers are also in a better position to address challenges such as accurate accounts settlement or full cost pricing. The Promass Q is a multivariable measurement instrument that supplies users not only common values such as mass flow, density or temperature, but also quality-relevant parameters such as overrun or brix value. The Promass Q is a genuine jack-of-all-trades designed to help food manufacturers with their daily challenges.