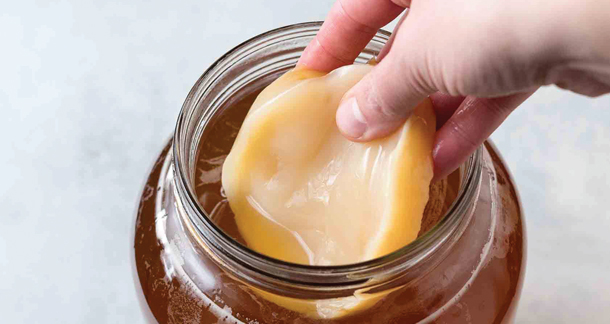 Kombucha, a fermented black tea was traditionally prepared and consumed in China. From there, it travelled to Japan, Russia, Germany and much of Eastern Europe in the early 20th century as a result of trade route expansion. Popularity of the drink was due to the high health benefits offered by consuming it daily. There are stories available suggesting that daily consumption of kombucha kept deadly diseases such as AIDS and cancer in control. This immune stimulant Kombucha is manufactured and marketed by various homegrown brewers in India. Sadly, it is not as famous as wine or beer among the Indian society yet.

Kombucha is produced by fermentation of sweetened tea.  The alcohol content is usually upto 0.5% and hence called low alcoholic or non-alcoholic beverage. Kombucha available in the stores are of two types- Raw and Pasteurized. Raw kombucha is a home to live bacteria which are good for gut health, also called as good probiotic bacteria. This feature makes it a functional beverage, a drink offering extra health advantage. This super drink has been food technologists’ favourite topic as much of microbiological, technical and nutritional study goes behind brewing this drink.

The fermentation takes place when Scoby, i.e, Symbiotic Culture of Bacteria and Yeasts is added to sweetened or sugared black/green tea. Scoby is slimy, rubbery dish like. The scoby mainly contain cellulose and host variety of bacteria and yeasts. The symbiotic culture inhabits prokaryotes like Acetobacter, Gluconobacter bacteria genus. Sugar acts as the substrate for fermenting bacteria and yeasts to produce alcohol, carbon dioxide and acids as products of reaction. These bacteria produce acetic acid during fermentation which in a way turns beneficial as ethanol and acetic acid prevent growth of pathogenic bacteria. The fermentation is mainly responsible for production of probiotic microorganisms.

Kombucha is typically fermented for 8 – 10 days at room temperature, away from sunlight to get a perfect taste. It traditionally has a light vinegar-like smell and a slight sweet taste. The carbon dioxide by-product of fermentation aids in producing little fizz. Flavoured kombucha is available in the market with some unique flavour combinations like lemon ginger, strawberry, mango, apple cinnamon, ginger pepper, etc. Overall, a plain unflavoured kombucha also has a refreshing taste.

The pasteurization of kombucha kills the bad as well as probiotic bacteria from the drink. Pasteurized kombucha contains no amount of probiotic bacteria in them making it just a low calorie fizzy drink with no additional health benefits to offer. The taste of pasteurized kombucha is not as deep as raw one, but some people do find it satisfying. It is generally mentioned on the bottle whether the drink is live or pasteurized.

Kombucha is a perfect replacement of wine for non-alcohol drinkers. It provides healthy bacteria to the gut leading to improved digestion, reduced inflammation, bloating and weight loss. It contains bioactive compounds such as catechins and polyphenols which act as antioxidants. Some rat studies concluded that consumption of kombucha can reduce liver toxicity to a great percentage. Kombucha has  major anti-bacterial effects as the acetic acid in it kills many bad microorganisms in body. It is reported to reduce the risk of heart diseases and Type 2 diabetes. Surely there are very less beverages bestowing so many health benefits upon us! This ‘Kombucha beer’ has gained popularity all around the globe for the good effects it’s consumption has shown. I am sure more research and product development will go into popularizing this traditional miracle drink and attract the eyes of generations to come!