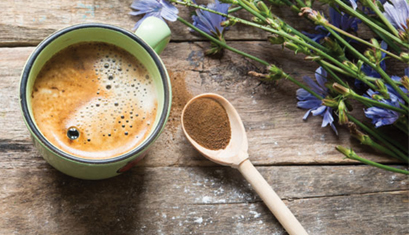 Inulin, a white, mildly sweet, indigestible polysaccharide that occurs particularly in the roots or tubers of various plants. It consists of Fructooligosaccharide (FOS) which is a soluble prebiotic fiber that is resistant to digestion and then reaches the large intestine. This prebiotic has a very Low Glycemic Index which means they are slowly digested, absorbed and metabolized. It nourishes the Friendly Bacteria and is a widely used ingredient from chicory root.

Oligofructose or Fructooligosaccharide (FOS) has 35 percent of the sweetness of sucrose, and its sweetening profile is similar to sugar. Standard inulin is slightly sweet, while high-performance inulin is not. Its solubility is higher than the classical fibers. When thoroughly mixed with liquid, inulin forms a gel and a white creamy structure, which is similar to fat. Its three-dimensional gel network, consisting of insoluble submicron crystalline inulin particles, immobilizes a large amount of water, assuring its physical stability.

The Global Inulin Market is forecasted to register a CAGR of 6.5 percent and reach a value of USD 2.1 billion, by 2024.

Weight Loss Ingredients Market is projected to reach an Industry Value of USD 408.36 billion by the end of 2024.

It has become a natural sugar replacer, used in every growing number of products, and its presence means that companies can also flag up the enhanced fibre content on the label. In some food industries, it is used as a substitute of fat, as a humectant (to keep things moist) or as thickening as a binding agent. These are also vital to maintain your bone health. The main advantage of inulin is that it helps to maintain the weight as obesity is a major concern of today’s society.

In one documented case, inulin caused an anaphylactic reaction. As the use of inulin as an additive in the food industry increases, reports of allergic responses will probably increase. Inulin may be behind more food allergies than is currently recognized. The list of known allergies include: flatulence, bloating, cramps, abdominal pain, and diarrhea. As inulin permeates our food supply, the list of side effects is expected to grow.

Inulin is a part of our daily diet for hundreds of years. We find it in many fruits and vegetables such as bananas, onions and wheat.The root of the chicory plant (CicoriumIntybus) is the natural source of Frutafit® inulin and Frutalose® oligofructose.

Based on Ingredients through which inulin is produced are of following types:

Sources of inulin include many vegetables such as artichokes, agave nectar, yam, leek, garlic, asparagus, onion, and roots derived from plant sources such as dandelion, chicory.

Wide variety, such as bananas.

Derived from the wheat grain, primarily used via a flour source.

Inulin and oligofructose are widely used in functional foods throughout the world for their health-promoting and technological properties. They are ingredients of the future that meet the needs of the food industry today and are on the leading edge of the emerging trend toward functional foods.

* Auhtor is Copy Editor in Food Marketing and Technology Magazine

Healthy and Delicious Avocado: Price of the Bounty

By Rico R. MagdaThere has been a silent contest among the major producers  of this unique ‘green-gold’ avocado as to who would be on the top list of suppliers or exporters. There have been many contenders but the production of this ‘green-gold’ fruit is creating some...
Read More

Ensuring quality from the plantation to the end product Currently, coconut oil is experiencing a revival and there’s no question that it’s more popular than ever. However, a report by the magazine Ökotest, a German consumer magazine published since 1985, shows that...
Read More

The news that plant-based diets are growing in popularity is no great surprise. The appetite for alternatives free from animal products began years ago with substitutes for nuggets and patties. However, mimicking the firm and rough texture of an Italian salami, for...
Read More