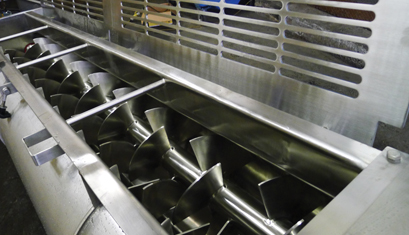 Continuous mixing is a core technology in the production of many food products. Insights into how continuous mixing can be optimized and the implications for food manufacturers have been revealed by Positron Emission Particle Tracking’ (PEPT) techniques, as part of the UK’s Project Chariot research into mixing fine powders, reports Eddie McGee, Managing Director, at solids handling equipment maker Ajax Equipment.

Ajax Equipment’s Continuous Twin Screw Mixer technology was the primary mixing methodology used in Project Chariot. A twin screw continuous mixer comprises two rotating intermeshing screws enclosed within a profiled casing. The screw arrangement consists of a series of paddles adjusted to resemble a discontinuous helix, which mix and drive material axially as the shafts rotate. The mixer offers a great deal of flexibility in the degree of mixing through changes to the operating parameters such as speed loading as well as the screw design: ribbons and various custom profile paddles, and changes to paddle frictional characteristics and angles.

The way in which material moves through a twin-screw continuous mixer has been investigated by researchers using ‘Positron Emission Particle Tracking’ (PEPT). Radioactive tracers of a similar size and density to the powder particles were passed through the mixing system to chart the movement of particles. These were detected by radiation sensors in the final quarter of the length of the mixer (22 of the total 78 mixing paddles).

The radioactive particles were recycled through the system multiple times in order to achieve between 80-100 passes per experiment, in order to capture the various particle paths that may be taken during transit through the system. The PEPT technique has given an insight into the twin screw mixer’s operation, showing how powder particles travel through the mixer during each of the 4 trials.

Figure 1 shows a three dimensional plot of one of the tracer particles within the high feed/ low screw speed regime (the color of the path changes with respect to time spent in the system). Through the analysis of hundreds of such particle paths, a complete qualitative description of how powder flows within the continuous mixer is as follows:

A follow-up study was conducted proving these events happened often enough to ensure reordering of the bulk is achieved to achieve mixing to an excellent standard.

In addition, moving from shaft to shaft illustrates a far reaching radial effect which differentiates the twin screw from single screw mixing. For example, in food processing with both granular materials and liquors to combine, the twin screw provides both squashing and shear of the bulk which encourages good combining and dispersion of the ingredients.

As stated earlier, the system limitations (the size of the positron camera) meant that the working could only be observed for the last quarter of its axial length; the overall mixing quality for the continuous mixer should, in theory, be many times greater for the full length. Mixing was also observed to be effective even under lower loading conditions, indicating the machine may be operated at wide degrees of channel fill; without drastically affecting product quality overall.

The insights into continuous mixing offered by the PEPT tracking enables fine tuning of the mixer design to offer more customized systems, better suited to the material’s mixing requirements.

The Ajax twin screw mixers include profiled covers as part of a design ensuring there are no areas of the machines that are not effectively swept by the screws and with the covers fully hinged and counterbalance for ease of lifting there are no areas that are awkward to clean. The casing’s hygienic, crack and crevice free finish ensure the continuous mixers meet the strict hygiene standards for food manufacture. The mixers also feature Ajax’s paddle screw geometry which provides efficient though gentle mixing with negligible damage to ingredients.