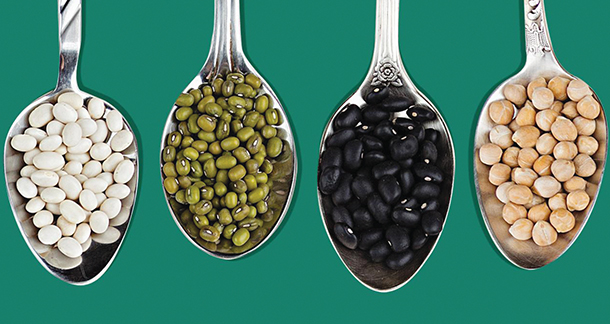 Fibre is a carbohydrate that cannot be broken down into sugar molecules that the human body can’t digest. It is an important part of the daily diet. Depending on their solubility, fibres are classified into two groups: soluble and insoluble fibre. Soluble fibre dissolves in water and forms a gel-like substance and swells, when mixed with water. It provides health benefits such as lowering blood cholesterol, regulating blood glucose levels, promotes weight loss and healthy bowel movements. Insoluble fibre does not dissolve in water and goes through the stomach without breakdown. It helps in improving intestinal health, reducing the risk of constipation and aids in weight loss

Why do Indians need soluble fibre?

Two-thirds of the Indian population suffer from digestive disorders such as constipation, diarrhea, irritable bowel syndrome (IBS), and inflammatory bowel disease. Indians are prone to digestive disorders because of the constant exposure to harmful pathogens and the consumption of foods with spices (should we consider a sedentary lifestyle and lack of exercise, instead?). Soluble fibre ingredients act as prebiotic ingredients, which stimulate the growth of beneficial intestinal bacteria, aids in digestion, improving gut health. It also helps in lowering fat absorption and managing weight.

FructoOligoSaccharide (FOS) is increasingly used as a bulking agent. The caloric reduction can be achieved by replacing the usual sweetener with FOS. Inulin and FOS act as prebiotics that stimulates the growth of beneficial intestinal bacteria, aid digestion and improves gut health as well as leading to caloric reduction. Psyllium husk powder is used in food and pharma applications to reduce the risk of constipation. Polydextrose and resistant starch/maltodextrin are used in snacks, ice cream and other food applications for their functional benefits such as low fat, low GI properties. Konjac fibre used in dietary supplements products

Key Players in the Indian Market

India is the largest producer and exporter of Psyllium Husks/powder nearly 80%. PHGG is exported to the world from India is 99% with only 1% being used to cater for Indian demand due to less domestic demand. India imports marginal volumes of inulin globally from China and the USA. FOS is mainly imported from China, Korea, the US and Europe and exports to Brazil and USA. The total demand for konjac fibre is met by the imports from China and minimal quantities is from Japan. Polydextrose imports from China and US. Ingredion, Roquette’s resistant starch/resistant maltodextrin/dextrin is imported in India at low volumes

Food Safety and Standards Authority of India (FSSAI) recommends soluble dietary fibre to be taken as part of a diet to help in the maintenance of a normal lipid profile. This beneficial effect is obtained with a daily intake of 3g of soluble dietary fibre. Indian Council of Medical Research (ICMR’s)recommended dietary allowance (RDA) of dietary fibre for Indians is 15.7g

Dairy (Yogurt) is one of the most consumed healthy and nutritious foodstuffs in India. Due to its nutritional properties, Inulin is a widely proven prebiotic fibre, as a texturizer, sugar and fat replacer and providing soluble dietary fibre

In the beverages sector – Inulin is completely soluble and gives beverages extra body and is also an ideal sugar replacer in low-calorie beverages. By enriching the fibre content or as a fat replacer, inulin is added to drinks

Functional foods – Inulin, FOS and psyllium husk/powder helps in lowering fat absorption and weight management. It dissolves in water and is broken down into a gel-like substance in the part of the gut digested and absorbed. Inulin and FOS lead to an improved taste and texture as prebiotic ingredients which stimulate the growth of beneficial intestinal bacteria. The addition of inulin or oligofructose increases the dietary fibre content of the diet foods like protein bars, slimming shakes, and soups products. Psyllium husk helps slow down the transit of the food through the stomach. As a result, it feels full for a long duration, thereby limiting more food consumption using slimming drink products

Bakery/cereals/bar – Soluble fibre ingredients such as inulin, FOS and Psyllium Husk are frequently used in bread, cookies, cereal snack bars and Breakfast Cereals for their functional benefits such as Low fat, low GI and no artificial ingredients are major trends. Psyllium husk powder is used in bakery products to retain moisture and help bread from becoming too crumbly and claiming more fibre content in the products. FOS is majorly used in cereal bars as a fat or sugar replacer

Baby food/Infant formulas – FOS is majorly used soluble fibres. It provides a bifidogenic and lactogenic effect, so it much helps to improve gut health for infants/ baby also helps in the reduction of constipation in children typically occurs at the stages after starting formula or processed foods during infancy. Some of the baby formulae contain inulin and FOS combination. Galacto-Fructose is recommended to pregnant women, nursing mothers and children

Other foods – psyllium husk is used in products like multigrain atta for the clime of high fibre content. Start-up companies are currently adding FOS and Inulin in snacks and claiming as fibre rich snacks

Pet food & Animal feed – In pet foods, largely used soluble fibres FOS, inulin, psyllium and MOS in the premium product category. MOS and FOS will increase the number of healthy, good bacteria in the pet’s digestive system, to help reduce the number of bad bacteria. Its absorption of vitamins and minerals is high which leads to good growth of pet

Pharmaceuticals – Galactofructose, psyllium husk  mostly used in a therapeutic formulation is used in the treatment of constipation, hepatitis encephalopathy, intestinal microflora, dental care, diabetes, and chronic liver disease and as an effective prebiotic 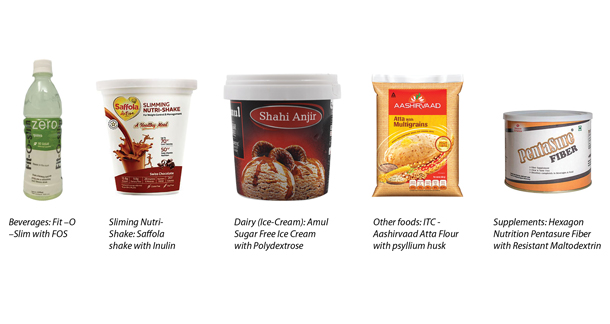 High fibre and the dietary fibres concept are emerging in India. It is one of the factors for consumers in decision making and considering purchasing certain foods such as bread, cereal, cookies, fortified drinks and supplements, etc. India soluble fibres market is expected to witness robust growth by 2021-2026 by the benefits related to health and it is widely used for weight loss management, sugar replacer and constipation. COVID-19 pandemic has created growth opportunities for the soluble fibre market. The Ingredients like FOS, Inulin and psyllium segment is expected to grow at the highest CAGR by 2021-26, due to its various health benefits and extensive use as an additive, flavor enhancer and as replacement of fats & sugar. Its wide range of applications in the dairy, bakery, dietary supplements, and infant formula to pet food and animal feed. The Soluble fibre supply market in India is mainly contributed by the Indian players in the production and export of psyllium. Galactofructose (Lactulose) use in pharmaceuticals sectors was not seen in consumption in other food sectors because of its laxative effect. Awareness of staying healthy among consumers in India is expected to increase polydextrose demand in sugar reduction. Konjac, Chitosan, PPHG, Beta-glucan rich fibre, resistant starch and resistant maltodextrin have merely less penetration in the Indian market compared to the global market

F1rst is coming up with the study on soluble fibre market, wherein we capture the supply-demand (2021-2026) scenario with key details on recent trends, how the market was changed in the last few years in terms of availability, applications, competitive ingredients, challenges, opportunities, and other details. This study will give you a historical picture in terms of the demand for different soluble fibre ingredients in India and how this sector will grow in near future because of ongoing health trends.  COVID-19 has paved a new way for how we look at these ingredients.

*An Associate Project Manager at F1rst with a postgraduate in Bio-Chemical Technology (BCT). For more information about this study, you can reach out to Vijayendran@firstmr.com