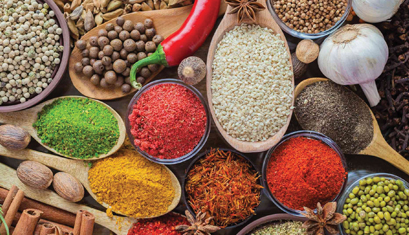 Flavour is a sensory phenomenon which is a combination of the sensations of taste, odour or aroma, heat and cold, and texture or “mouthfeel”. The appearance of food is important, but it is the flavor that ultimately determines its quality and acceptability. Natural flavouring materials such as spices, essential oils and fruit juices have been used for long in food preparations but as their supply has not kept up with the demand, with a consequent rise in their cost, natural flavouring agents have been largely substituted by synthetic ones. Thousands of these synthetic compounds are now being used as food additives. There are four basic tastes: salty, sweet, sour and bitter.

Salty: Sodium chloride is the only salt that has a pure salty taste. Besides imparting flavor to food, it is also an essential nutrient. Other salts have different tastes, e.g., some iodides and bromides are bitter while some salts of lead and beryllium are sweet.

Sugar: Sugar is used more to impart sweetness than flavor to food. Fructose present in honey is the sweetest sugar followed by sucrose and glucose, whereas lactose in milk is slightly sweet and gives less flavour. Natural sweet compounds are generally polyhydroxy compounds with a straight-chain structure, such as sugars and the hexahydroxy cyclic alcohols, mannitol and sorbitol. Diverse compounds, such as saccharin, some peptides and cylcamates are also sweet.

Sourness: Sourness of food is due to the presence of organic acids of which citric, tartaric and malic are the most common. Acetic acid produced by fermentation of alcohol is common in processed fruits. Ascorbic acid is abundantly present in fruits and vegetables. Oxalic acid found in spinach and phosphoric acid and its salts are often used in the food industry. Remarkably, the hydrogen ion is mainly responsible for sour taste. Except for oxalic acid, all other acids are weak acids and the degree of sourness is not proportionately related to the hydrogen ion concentration.

Bitterness: It may be due to alkaloids, glycosides, other classes of organic compounds as well as inorganic salts. Naringin the bitter principle of grapefruit is a glycoside of rutinose and is not toxic, while amygdalin, a glycoside present in bitter almonds contains gentiobiose and cyanide group, and it toxic. Mustard and horseradish contain the alkaloid sinigrin, which is harmful and gives an off flavour. Quinine, strychnine, nicotine, etc., are bitter alkaloids. Caffeine, a constituent of coffee and tea, is bitter. Phenolic compounds like tannin and some flavonoids combine bitterness with astringency.

The flavor of any food depends upon minute quantities of 100 or more chemicals that are present in food. These flavoring components are present in concentrations ranging from a few ppm to 0.1 percent.

The aroma of onion, garlic, cabbage, etc. is mainly due to sulphur – containing compounds. These vegetables should not be overcooked. Other flavouring components in vegetables are methanol, acetone, propanal, etc.

The substances mainly responsible for the aroma of food products are volatile compounds. These may be aliphatic esters, aldehydes, or ketones and are present in fruit and other natural foods in very low concentration: many thousands of natural flavouring compounds are known and in any one food there may be hundreds of these present. Some of the important groups of flavouring compounds are as under:

In the presence of air or dissolved oxygen terpenes undergo struct-ural changes and hydration, hence citrus juice concentrates prepared by low-temperature vacuum evaporation are superior in flavor than those processed at high temperatures. Juices of certain varieties of orange and grapefruit become bitter when kept at room temperature for some time, due to the formation of the bitter limonin from its nonbitter precursor (limonin monolactone) by the action of the organic acids present in the juice. This can be prevented by removing the precursor by exposing the fruits to ethylene before juice extraction, or by the addition of a specific enzyme to the juice to degrade limonin.

Vegetables of the Brassica family contain the sulphur compounds S–methylcysteine sulphoxide and thioglucosides. On cooking the vegetables, the former is converted into dimethyl sulphide which is partly responsible for odour. However, the predominant odour is that of the isothiocyanates formed from thioglucosides by enzymatic hydrolysis. This occurs only after rupturing of the cells when enzymes convert the thioglucosides into the unstable thiohydroxamic-o-sulphate which too is unstable and undergoes spontaneous degradation to isothiocyanate.

The sulphur volatiles responsible for the odour of onion and garlic are not present as such in the intact vegetable tissue, but are formed rapidly when the tissue is ruptured by cutting or chewing, by the action of an enzyme on a precursor. The precursors and the enzyme are present in different cells of the tissue and come into contact only when the cells are ruptured. The precursors are cysteine sulphoxide derivatives which on enzymatic decomposi-tion are converted into flavor compounds. The latter then un-dergo nonenzymatic degrada-tion to more volatile compounds such as sulphides, disulphides and trisulphides.

The characteristic odour of garlic is due to allicin, which is formed from the odourless alliin (S-2 propenyl cysteine sulpoxide) by the action of the enzyme allinase. Allicin then undergoes nonenzymatic decomposition to disulphide and thiosulphinate. The disulphide further decom-poses into a complex mixture of monosulphide and trisulphide.

The production of the volatile constituent of onion takes place similarly. Here the precursor S-1- propenyl cysteine sulphoxide is enzymatically cleaved to give propenyl sulphenic acid which is unstable and undergoes re-arrangement to thiopropanal S-oxide, the lachrymatory factor in onion.

(i)     Those in which aroma is mainly due to one compound, e.g., banana (isopentyl ace-tate), orange (citral), almond (benzaldehyde);

(ii)    Those in which aroma is due to a mixture of a few compounds, of which one is the major component, e.g., apple (2-methyl butyrate and four minor components);

(iii)   Those in which aroma can be reproduced faithfully by the use of a large number of compounds, such as pineapple, walnut; and

(iv)   Those in which aroma cannot be reasonably reproduced by a mixture of specific com-pounds, e.g., strawberries, chocolate.

These volatile compounds can be classified into the following important groups:

Among the phenols, phenol itself contributes to the aroma of some cheeses. Vinyl guaiacol is present in many foods, eugenol is an important component of oil of cloves but is also widely distributed and thymol is responsible for the odour of tangerine.

In the case of certain flavours the substances responsible for them are difficult or impossible to isolate from natural sources such as strawberry, cherry and beans. These natural flavours have, therefore, to be imitated as far as possible by mixing a number of flavouring agents, natural and / or synthetic. The success of such imitation is more a matter of art than of science and is judged by the consumer preference for the flavoured product. Both essential oils and synthetic flavouring agents must be used in accordance with good manufacturing practice the salient points of which are:

(i)    The amount added shall not exceed that reasonably required to accomplish the intended effect.

(ii)   Substances that may become part of the food as a result of manufacturing shall be kept as low as possible.

(iii)  The substance shall be of a good grade. Moreover, a flavouring agent may not be added to a food for which there is a standard, unless the standard includes it.

The following chemicals are used as flavor additives:

Food flavours and food additives play a very important role in the industries to prevent the food from deterioration as well as human needs and desires is increasing. By using additives there are several benefits by which at least in the off-season we can get any foodstuffs and by adding the flavour we can get the desirable flavours in the food. As consumer’s demands will increase to the food worldwide as the benefit will be an increase in the industries which is directly proportional to the increase in the national economy. The ultimate benefits we are getting to prevent food from microbial and other deterioration, as well as the harmful losses, is happening to human health. Increasing concentration of any food additives is directly proportional to the diseases in humans that is why there is some food testing agencies are involved to fulfill the criteria to make the food standard by analysis of food nutrients and the presence of food additives.