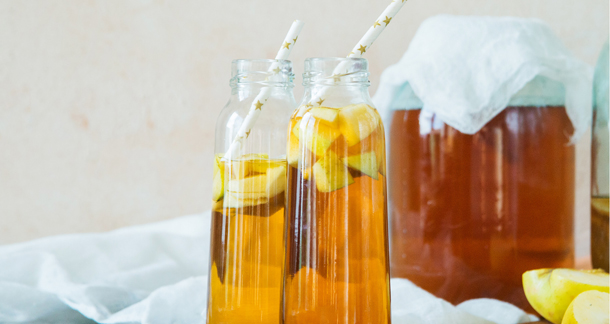 A family company, Aromatech was created in 1987 in France, in Grasse, the world capital of aromas and fragrances. At the origin of this creation, Jacques MARTEL, whose  son  Benoit  MARTEL   now   heads the Group with Yvan GRATTAROLA and their teams. Its international expansion then took it from Africa to the Middle East, then to Asia, from Thailand to China, via the United States.

It is this entrepreneurial spirit and the clever mix of all these flavors from elsewhere that have built the world  of Aromatech: Flavors designed by nature.

Kombucha is a slightly acidic fer- mented drink made from  a  culture of bacteria  and  yeast  inserted  into a sweet infusion made from  black tea. The Kombucha  flavor,  created by  Aromatech  Thailand,   responds to the growing trend of consuming probiotic-based products.

Its organoleptic profile is mainly characterized by sweet, flowery, fruity, terpene and iced tea notes. It will bring a touch of delicacy to sweet applications such as syrups, yoghurts and drinks. Relish this flavor full of sweetness in an alcohol-free cocktail recipe made with 0.18% liquid Kombucha flavor.

Aromatech develops aromas specially formulated for alcoholic or non- alcoholic drinks, available in liquids, emulsions, solvents, powders (for instant drinks) atomized or granulated depending on the applications and manufacturing constraints.