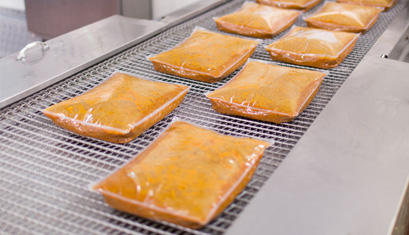 Synthetic polymers developed for innumerable purposes get couched up and struck in the ecosystem without getting degraded, which also adds toxic chemicals to the surroundings; invariably affecting the entire lives of this era. Packaging films being used in the food sector contributes accountably higher for this built up, which affects the food chain and causes an imbalance in the living system. The packaging alone is responsible for approximately one-third of the world’s garbage. This is a big concern among the food and packaging manufacturers and they are continuously making efforts to develop packages that can be recycled, in order to reduce the amount of waste. In this scenario, edible packaging plays a very important role in minimising packaging material wastage from a sustainability perspective.

Nature: The Source of Inspiration

The concept of using an edible film or coating to extend the shelf life of fresh foods and protects them from harmful environmental effects is not a novel one. In fact, the idea derives from the natural protective coating such as the skin of some fruits and vegetables. Covering foods with lipid substances like waxes and fats to retard desiccation is a very old practice. For example, hot-melt paraffin waxes became commercially available in the 1930s for coating citrus fruits to retard moisture loss, and carnauba wax oil-in-water emulsions were developed in the early 1950s for coating fresh fruits and vegetables.

Edible packaging comprises of edible films, sheets, coatings and pouches. Edible films and edible sheets differ from each other by their thickness, e.g. edible films have thickness 254 ?m. These are the stand-alone structures that are preformed individually from the food and then placed on or between food parts or sealed into edible pouches, whereas edible coatings are skinny layers of edible materials formed directly onto the surface of the food.

Edible films and coatings have similarities in their functions with synthetic and inedible packaging films, such as: barriers against water vapour, gases and flavour compounds; and protecting the food from mechanical damage, physical, chemical and microbiological activities.

Edible films and coatings have gained considerable attention over the last few years because of their advantages over synthetic films. These films could contribute to the reduction of environmental pollution, improve the recyclability of packaging materials, and they may substitute synthetic polymer films. Among other benefits they can also be used to encapsulate flavor/aroma compounds, antioxidants, antimicrobial agents, and vitamins.

Components of Edible Films and Coatings

A wide variety of polysaccharides, lipids, proteins, etc. obtained from protein and animal sources have been used alone or in combination to develop edible films, sheets and coatings. They are described below:

Polysaccharides: Polysaccharide films exhibit excellent oxygen, aroma, and oil barrier properties and they provide good strength and structural integrity. However, they provide very little resistance to water migration. The excellent oxygen barrier properties are because of their tightly packed, ordered hydrogen-bonded network structure and low solubility. The coatings using polysaccharides may retard ripening and help in increasing the shelf life of coated produce. Some of the polysaccharides that have been used in edible packaging formulations are: starch; cellulose; hemicelluloses; chitosan; and gums.

Lipids: Lipid compounds have been utilised as protective coatings for many years but since they are not polymers, they do not generally form coherent, stand-alone films. Lipid films have good water vapour and oxygen barrier properties. Generally, wax coatings are substantially more resistant to moisture transfer than most other lipid or non-lipid edible coatings. Edible resins such as: shellac; terpene resin; and wood rosin are used to impart gloss to food commodities. Shellac has been used extensively as an edible coating for the confectionary and fresh produce. Other examples of lipids that have been used effectively in coating formulations are: beeswax; mineral oil; vegetable oil; surfactants; acetylated monoglycerides; carnauba wax; and paraffin wax.

Proteins: The films and coatings are also made from animal and plant proteins. The examples of the proteins that are being used for coating fruits and vegetables are: soy protein; whey protein; casein; corn-zein; maize; egg albumen; collagen; and wheat. Like polysaccharide-based films, the protein-based edible films also provide excellent mechanical and barrier properties against oxygen, aroma, and oil. But they have very limited resistance to water vapours.

Composite Materials: Composite materials are a mixture of edible components that are made to overcome their respective flaws. The above mentioned different forms are not effective in preserving the quality of the fruits and vegetables by themselves. To improve their effectiveness they are being used in combinations. Most of the composite films studied to date consist of a lipid layer supported by a polysaccharide or a protein layer, or lipid material dispersed in a polysaccharide or protein matrix. The lipid components used in the packaging formulation reduce water transmission while the other components serve as selective gas barriers and provide mechanical strength and structural integrity; e.g. a film prepared by combining milk protein and lipid for lightly processed apples and potatoes was reported to provide protection from moisture loss and oxidative browning for up to three days.

A number of materials are incorporated into edible films to enhance structural, mechanical and handling properties or to provide active functions to the films. The examples are mentioned below:

Plasticizers: To improve film flexibility and durability, plasticizers are generally added to edible films. These include mono-, di-, or oligosaccharides like glucose; fructose–glucose syrups; and sucrose; polyols like glycerol, sorbitol, glyceryl derivatives and polyethylene glycols; lipids; and derivatives like phospholipids, fatty acids and surfactants.

Emulsifiers: Emulsifiers are essential to achieve sufficient surface wet-ability to ensure proper surface coverage and adhesion to the coated surface as well as for the formation and stabilisation of well-dispersed lipid.

An Overview on Global Edible Films and Coatings Market