Dietary Fibre Components and their Degradation Products as Nutraceuticals 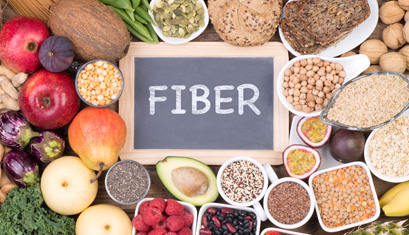 Dietary fibre (DF) consists of diverse polysaccharides such as arabinoxylans, 1,3/1,4-?-D glucans, pectins, mannans, arabinogalacto-proteins, resistant starch and ligno-cellulosic complexes. DF have diverse functional roles in fields such as food technology, nutrition and medicine due to the variation in their structure i.e nature of sugars, type of linkage, branching, molecular weight and also the presence of ester linked phenolic acids, acetic acid and methanol. Nutritionally, DF is known to alleviate disease symptoms such as diabetes, atherosclerosis and colon cancer. Oligosaccharides derived from dietary fibre are known to exert several health benefits especially with respect to immuno-modulation and their ability to increase beneficial bacterial population i.e exert prebiotic activity. In this article a brief write up about arabinoxylans (AX) and xylo-oligosaccharides (XOS) is provided with an emphasis on the work done at Central Food Technological Research Institute (CFTRI).

Among the dietary fibre polysaccharides AX are considered as unique due to their versatile functionality. Being potent natural immuno-modulators and prebiotics, arabinoxylans have recently been considered as functional food ingredients. Functional foods, which can enhance the health of the consumer, are having a large market in today’s global food industry. Arabinoxylans (AX) also known as pentosans are the major non-starch polysaccharides found in cereals, millets and pulses and are enriched in cell wall. AX consists of ?-L-arabinose and ?-D-xylose in different ratios, however, their fine structure varies largely with respect to their (a) botanical source (b) cultivar (c) location in various tissues of the grain. They were isolated and characterized from rice, wheat, finger millet and higher plants. Various Properties such as anti-diabetic, anti-tumerogenic, atherosclerogenic, antioxidant as well as antimicrobial properties of AX were documented. AX can be demarcated into water-extractable (WE-AX) and water-unextractable (WU-AX) polysaccharides. WU-AX are retained in the cell wall by non-covalent (e.g. hydrogen bonds) and covalent interactions (e.g. ester and ether bonds, diferulic acid bridges) with other AX or other cell wall constituents. Structure of AX are by and large determined by (a) arabinose to xylose ratio (A/X ratio) (b) the degree of substitution and (c) pattern of the arabinose residues along the xylan backbone. Arabinoxylans are complex, polydisperse and varies with respect to their structure, hence numerous isolation and fractionation techniques have been used to obtain more homogeneous fractions and their structural analysis was carried out by various chemical and spectroscopic methods such as methylation, periodate oxidation and Smith degradation, IR-spectroscopy, Optical rotation, and C & H NMR analysis.

Arabinoxylans are composed of main chain of (1-4) linked ?-D-xylopyranose residues with various degrees of substitution on O-2 or O-3 or at both O-2 and O-3 by L-arabinose residues and also sometimes with 4-O-methyl glucuronic acid in the side chains. Cinnamic acid derivatives such as ferulic acid and coumaric acids are esterified to the 5-OH group of arabinose side chains, whereas acetic acid is found to be esterified to the free OH group present in the backbone. According to one school of thought the presence of occasional acetyl groups in the xylan backbone contributes to its solubility, while deacetylation leads to the formation of xylan aggregates. However recent literature suggests that extensive acetylation does contribute to the insolubility of arabinoxylans, indicating the bi-functional nature of acetyl groups. The unique properties of arabinoxylans lie in their conformation which were determined by X-ray diffraction analysis and they have shown to have a 3 fold, left handed helix in solution and in the solid state they appear as an extended, twisted ribbon if the xylan backbone is unsubstituted. The xylan backbone is relatively flexible, since it is supported by only one hydrogen bond between two adjacent xylose residues, and it aggregates into soluble complexes, stabilized by inter molecular hydrogen bonding. The presence of arabinosyl substitution appears to prevent this aggregation, and stiffen the molecules by maintaining the xylan backbone in a more extended conformation as confirmed by X-ray diffraction analysis.

It is well known that differences in the degree of substitution and molecular size influence arabinoxylan solubility, extractability, functionality and thereby their utility in different technological and industrial processes mainly bread making and brewing. Recently it was documented for the first time that the water soluble feruloyl arabinoxylans from ragi and rice could exhibit antioxidant activity. Apart from phenolic acids, presence of sugars with >C=O (uronyl/acetyl) groups and degree/nature of polymerization impart strong antioxidant activity of the polysaccharides. Arabinoxylan of rice bran is shown to sensitize human T-cell leukemia cells to necrosis, and is active against HIV.

At CFTRI, lot of emphasis has been laid on the arabinoxylans (AX) and xylo-oligosaccharides (XOS) with respect to their (a) purification and characterization (b) enzymatic degradation and (c) on the evaluation of their prebiotic, antioxidant, antibacterial and immunomodulatory activities. Recently, understanding of the utilization of xylo-oligosaccharides by Lactobacillus sp. by transcriptional analysis was carried out and also on the evaluation of synbiotic preparation (xylo-oligosaccharides + Lactobacillus sp.) for antioxidant and cholesterol lowering properties in vitro. Of the currently known functional foods, non-digestible oligosaccharides hold an important position with respect to the prebiotic activity. Very recently arabinoxylans isolated from cereals brans and pulse husks were degraded by plant and commercial fungal xylanases in to xylo-oligosaccharides and their prebiotic, anti bacterial and immuno-modulation activities have been documented using the Lactobacilli and Bifidogenic species. XO mixture obtained from ragi showed good antioxidant activity which is higher than wheat, maize and rice XO. The prebiotic activity has increased with decrease in chain length. Xylobiose has maximum activity. Lack of mitogenic and co-mitogenic activities of these Xylo-oligosacchrides derived from Bengal gram AX can be ascribed perhaps due to the absence of ester linked acetyl groups and low degree of polymerization.

Ferric reducing power as well as radical scavenging activity were significantly (p<0.05) higher in all the synbiotic preparations as compared to that of probiotic samples. L.brevis NCDC01 showed significantly higher cholesterol lowering and bile salt deconjugation ability compared to other strains. Analysis of gene expression by real-time quantitative PCR (qPCR) showed a significant up regulation of genes putatively coding for the components of the ATP-Binding Cassette (ABC transporter system).

Therefore, versatile functions of arabinoxylans make them as unique polysaccharides with great potential in food, flavor, pharmaceutical and nutraceutical industries. Future research on individual arabinoxylans will open up new venues with respect to disease prevention as they can be considered as natural drugs without any side effects. XOS derived from the AX can be very good prebiotics and can be combined with probiotics (beneficial lacto bacilli and bifidogenic bacteria) and can be used as synbiotics which have immense beneficial effects pertaining to bowel function as well as disease prevention with respect to life style disorders such as diabetes, atherosclerosis and colon cancer.