In every day diets, most of the Western people consume far too little dietary fibers. They do not reach the recommendation of the German Nutrition Society/WHO of a daily intake of 30 g dietary fibers. Especially with the nutritional development which is associated with the latest fitness trend more and more people start to work out to be part of the “fit is beautiful” society. As part of this, also the nutrition of “non-athletic people” has changed. Low-carb – high protein is a popular form of nutrition. You can see low carb and/or high protein products all over the commercials and supermarkets with just a low dietary fiber content. However not just people, who do not exercise regularly but also athletes have low fiber intakes. The nutrition of athletes contains a high amount of proteins for the recovery and growth of the muscles and quickly available carbohydrates to get fast energy for their training. Dietary fiber intake is  still an unattended topic.

The right combination of soluble and insoluble fibers can enhance the health of non-athletic and athletic people. Especially for meal replacement insoluble dietary fibers are suitable because they improve the feeling of satiety (Wellness Foods & Supplements Issue No.1 April/May 2015 Fibers against obesity). They also stimulate the bowel movement that shortens the transit time of digestion. This helps to prevent the bowel wall from harmful substances like carcinogens. The insoluble fibers not just have an influence on the digestion but also on the metabolism. They regulate the blood sugar level by promoting the insulin sensitivity. The soluble fibers also have an impact on the digestion. They can be a protection against constipation because they lead to defecation. Many of the dietary fibers act as a prebiotic. That means the helpful bacteria in the gut can ferment them. This leads to a higher growth rate of these bacteria that supports the protection of the intestinal mucosa. In turn, this supports the immune system by protecting the body from toxins, pathogens and from the leaking gut syndrome. Dietary fibers also have a positive effect on the metabolism. The short-chain fatty acids that are produced during the fermentation of the dietary fibers reduce the cholesterol in the blood.

According to the German institute for sports nutrition (DiSE e.V.) an intensive training can lead to a leaky gut syndrome which can be prevented by the consumption of a diet rich in dietary fibers.

As already mentioned the nutrition of some people has changed with the latest fitness trend. The consumption of protein shakes and protein products has increased. Many people, not just power athletes, combine their training with a protein shake or even replace a meal to lose weight. Many of these shakes do not contain dietary fibers or if, they contain just soluble ones. A high amount of just soluble fibers can cause flatulence due to the high fermentation rate. That and the previous described positive effects are the reasons why a combination of soluble and insoluble fibers is so important.

However, with the development in the sports nutrition the consumption of protein shakes and the requirements on these products increases. Because of the trend of the “fit and healthy society”, the consumer gets more and more interested in the ingredients of a product. Not just carbohydrates are in the focus of these consumers but also E numbers. The ingredients have to be natural – the ingredients list clean label.

Therefore an easy solution to incorporate soluble and insoluble dietary fibers into the daily diets of athletes and the fitness-driven population was created. For the CFF GmbH & Co. KG it is always important to develop solutions for the latest market trends. That’s why they offer the SANACEL® add 045 as a solution for the mentioned consumer necessity of a natural clean label product combined with the health factor of fiber enrichment. With this fiber blend there is the possibility to create an enriched protein shake with soluble and insoluble fibers and also replace conventional thickening agents with a natural clean label product which creates a creamy mouthfeel.

SANACEL® add 045 in an application

The CFF GmbH & Co. KG has done a small consumer study about the consumption of a protein shake containing SANACEL® add 045. The aim of this test was to compare a fiber enriched protein shake with a standard one.

For the test 32 people had to drink a protein shake two days in a row. On day one the shake did not contain fibers. On the second day the test group were served a fiber rich version of the same protein shake enriched with SANACEL® add 045. The test has been performed as a blind test, the test persons didn’t know on which day they received the shake with or without fibers. The test has been performed on both days at the same time in the morning. Afterwards a questionnaire was completed according to the following three criteria: satiety before and after the shake, well-being before and after the shake and the mouthfeel of the shake during and after consumption. The results are shown in the following figures. 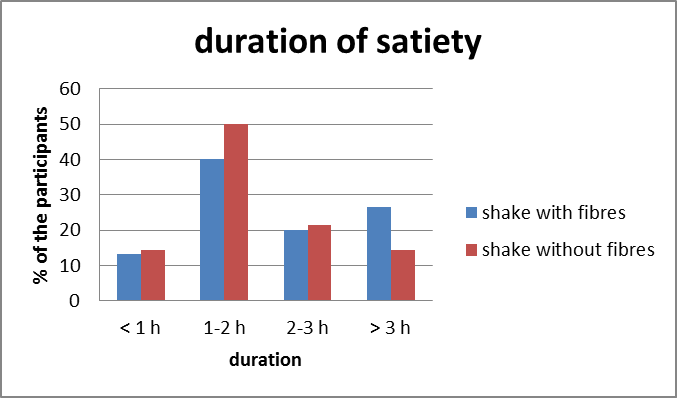 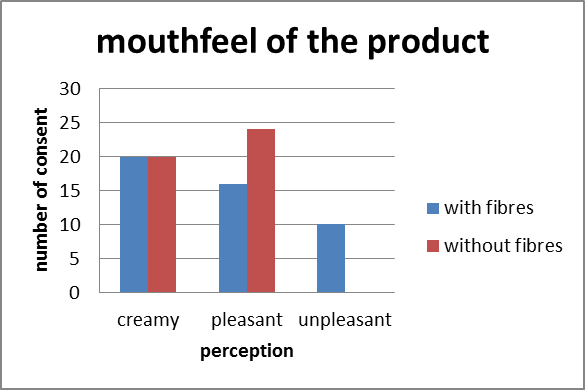 The results of the questions regarding the mouthfeel show, that both shakes have a nice creamy texture. In general, the shake with fibers was perceived more unpleasant than the shake without fibers. The main reason is the too thick mouthfeel of the product. Since the fibers have been added on top of a market product we see the cause of this in the combination of thickening agents of the finished protein shake and the additional SANACEL® add 045, which acts also as a clean label thickening agent. The mouthfeel after the consumption is also perceived slightly more negative after the shake with fibers. Nevertheless, some of the participants experienced this negative coated or dry mouthfeel even after drinking the shake without fibers. These attributes are subjective. To classify these attributes better there should be more participants and more of them should consume protein shakes on a regularly basis.

To have more results that are significant the next step would be an extended consumer test. This test should include all different types of consumers, those who never drink protein shakes up to those who drink them on a regular basis. It also should be conducted over a longer period to see the effect on the gastro-intestinal tract and the digestion with a regular consumption.

Most of the people do not reach the recommended fiber intake in the daily nutrition. Especially athletes and fitness-driven people leave fibers in their special diets unattended. However, a combination of soluble and insoluble fibers are important for an efficient digestion and also some metabolic functions like the cholesterol and insulin metabolism.

CFF GmbH & Co. KG offers with its SANACEL® add 045 fiber blend a balanced combination of soluble and insoluble dietary fibers. With this fiber blend not just the aim of a fiber enriched (protein)shake but also of a creamy, clean label product can be achieved.

Located in Germany and founded in 1977 CFF GmbH & Co. KG distributes dietary fibers from Gehren into more than 70 countries around the world. As a producer of food ingredients, it is very important for CFF to offer high quality technical support, customized fiber solutions and an innovative growing portfolio. Experts can give the appropriate recommendation for each of your specific applications, please feel free to be in touch