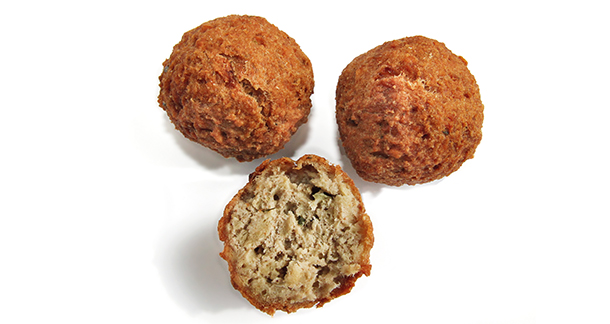 In recent years, plant-based meat and sausage alternatives were only available in specific certified organic shops, today you can find them in any supermarket. Vegetarian and vegan alternatives achieve a steady turnover grow and the products are continuously optimised and reformulated.

Various raw materials like soy, pea or wheat are used for innovative meatfree products to fulfill the wide choice of meat alternatives varying from vegan sausages or cold cuts to nuggets or burgers.

Vegans or vegetarians generally care about their nutrition. Most of them read the ingredient list and compare nutritional profiles of food products. Dietary fibers are not present in meat products. So why not adding healthy dietary fibers to a vegetarian or vegan meat alternative? This creates another additional value for the product. The fiber enrichment boosts the nutritional profile and contributes to make the product healthier and more attractive, even to non-vegetarians. 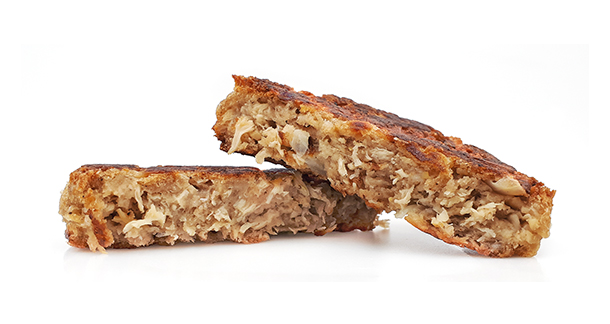 The challenge is to please a non-vegetarian with a product that is as similar as possible to real meat. The so-called flexitarians, who try to avoid meat more often, are looking for meat alternatives but seek the same culinary pleasure compared to real meat. Some attributes at least should be identical: the bite, the flavor and the color. 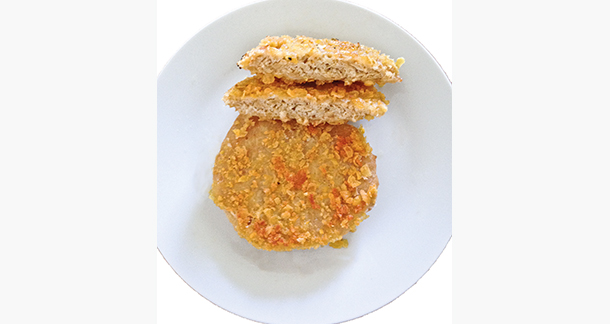 CFF’s technologists tried several proteins from soy or pea as well as chickpea flour. Vegans and vegetarians favour soy protein because of the beneficial amino acid profile. The protein of soy is one of the rare plant-based proteins that corresponds to a whole food diet. The high content of essential amino acids (35-40%) makes it more comparable to chicken egg.

Independent from the protein source the production steps were identical for all trials. Several Tests  show that the end of the cutting process in the bowl chopper is the best time to add the SANACEL® fibers. The late addition allow the fibers to bind excess oil or water and prevent the product to become dry in the raw condition. The fibers also have the capacity to absorb the water that escapes during frying, thus ensuring a juicy mouthfeel. For easy handling, the fibers can be mixed with the dry ingredients, while water and oil can be added afterwards. This compound must be chopped until a homogenous mass, and the final grit size is reached.

After frying, the yield was almost identical in all trials and varied between 89 % and 91 %. However, the   tests found differences in colour before and after frying. Chickpea flour achieved the best result. In addition, the nuggets with chickpea flour were also the juiciest.

Summarized, it has been proven that the colour is influenced by the proteins and not by the fibers.  Furthermore, dietary fibers influenced the juiciness. Due to the functional characteristics of SANACEL® products, it is possible to increase the water content and thus obtain a juicier product. 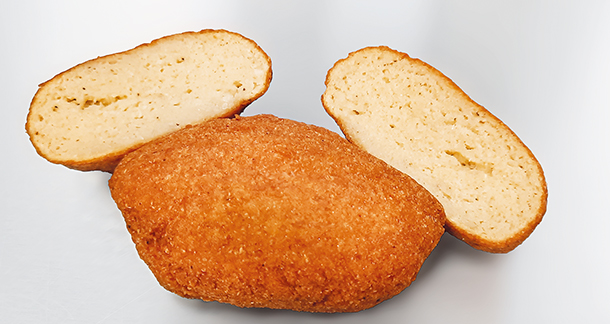 Vegan burgers with a meat-like appearance

Often vegan burgers are softer than usual burgers and the bite is missing. SANACEL® fibers support the structure to give the patty a meat-like bite. Vegan products need a binding agent to stabilise the product before and after frying. CFF developed a special SANACEL® add blend for vegan products for fiber  enrichment to avoid binding agents with E-numbers and to give a clean label solution. The blends have a high fiber content and gel building properties that even increase during the frying process.

An additional benefit shows the SANACEL® apple fiber. First, it is a partly soluble fiber and improves the consistency of the patty. Additionally, in comparison to other fibers, apple fiber positively influence the colour of the burger patty. Its brown color helps to create the typical meat look.

Healthy nutrition and the issue of animal welfare are becoming more and more present and play an  increasingly important role in consumers’ food choices. Many meat consumers are therefore also recognising vegetarian and vegan meat alternatives. Now is a good time to join the trend of meat alternatives. SANACEL® fiber concentrates offer the possibility to improve continuously these products on a natural basis. Colour, texture and bite can be adjusted so that vegan burger patties or nuggets rival their meaty counterparts.