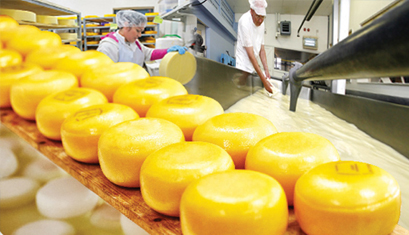 With the fast growing world and modernization, life has all gone junky. Technology has set new trends and people have accepted the change. The advancement in technology has a huge impact on processed food. Because of advancement in processing technology, life has gone “cheesy”, and food has become a serious business. One of the most important ingredients, almost like a table top ingredient, found in almost every home is cheese. Every country has their own way of defining cheese using various technical terms such as hard, semi hard, semi cooked, smear-pressed etc. But at the end there is only one conclusion- “it’s yummy”.

Cheese, in simple words, can be defined as a food product produced from milk of various animals; such as cows, buffaloes and sheep’s by the coagulation of milk protein casein. Cheese is the generic name for a group of fermented milk-based food products, produced in a great range of flavours and forms throughout the world. During production, milk is usually acidified, and adding the enzyme rennet causes coagulation. The solids are separated and pressed into final form. Some cheeses have moulds on the rind, the outer layer, or throughout.

Heat affects the other main type of milk protein, for example whey. Whey proteins are denatured (unraveled) by heat; exposing “sticky” portions of their structure. These sticky ends can bond to each other across whey proteins or bond to casein proteins. Acid can also contribute to whey coagulation now that they have been denatured by heat. The result is a matrix of coagulated whey protein, and if casein is present, a matrix of coagulated whey/casein. Pasteurization is the heat treatment process done to sterilize the milk for cheese making so as to keep it free from micro organisms and also to increase the shelf life of the product. Pasteurized processed cheese contains 100% cheese, pasteurized process cheese food contains at least 51% cheese and pasteurized process cheese products contain less than 51% cheese.

Cheese makers heat the milk, whether it is raw or pasteurized, as the first step of the cheese making process to create a desired temperature for lactic acid bacteria (LAB) to thrive. LAB consume lactose present in milk and produce lactic acid, which acidifies milk and inhibits growth of potentially harmful bacteria. Like any living organism, bacteria require a certain temperature range to live and flourish. The specific temperature range depends on the type of bacteria. Milk leaves a cow’s udder at around 100°F. If the cheese maker is to milk the cow and make cheese right away, potentially no heating would be necessary as long as the LAB is tolerant of that temperature, and most are. Cheese makers typically refrigerate the milk for future use. Therefore, it would need to be heated up again to reach a desired range for LAB.

There are many different types of cheeses, and the milk used varies from cow’s milk to yak’s milk. Their taste varies from sweet to bitter and anywhere in between. From herders to modern day machinery, technology has improved the making of cheese greatly, but it has also kept it the same.

Milk curdles and soft mass of protein is obtained, called cheese curd, from which whey has been removed. This is one of the most important cheese making processes as it defines the flavour and texture of cheese. Cheese ripening involves gentle treatment of cheese curd involving various time temperature combinations. Various factors are involved in cheese ripening such as micro flora of the curd, bacterial action and reactions of enzymes. Bacteria increase the acidity of the cheese and provide distinct flavour. With ripening, the structure of the cheese changes and cheese ages to get a better texture and flavour.

Before the ripening process, many different procedures can be undertaken, or ingredients added, to give each cheese its distinct character. By taking the cheese through a series of maturation stages where temperature and relative humidity are carefully controlled, the cheese maker allows the surface mould to grow and the mould ripening of the cheese by fungi to occur. Mould-ripened cheeses ripen faster than hard cheeses, in weeks as opposed to the typical months or even years. This is because fungi used are more biochemically active than starter bacteria.

Where the ripening occurs is largely dependent on the type of cheese: some cheeses are surface-ripened by moulds, and some are ripened internally. Surface ripening of some cheeses may also be influenced by yeasts which contribute flavour and coat texture. Others are allowed to develop bacterial surface growths which give characteristic colours and appearances.

Cheese is considered a non-healthy option. But, eating everything in a balanced way is fit for our body. Cheese has a lot of plus factors if we look carefully. It is a source of non meat protein; it has the combination of both calcium and vitamins; it has less amount of salt and is a source of natural fat. It’s good in so many more ways. Most importantly, cheese keeps us happy and is liked by people of all ages. So, we hope to look forward to more options related to processed cheese in the coming future that would be tastier and healthier.