Are UV Rays safe to Food and Beverages 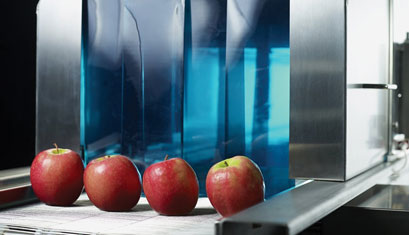 Ultraviolet radiation (UV), an electromagnetic radiation with wavelengths measuring from 100 to 400 nanometers, is becoming a more popular technique in decreasing or eliminating pathogens from food and beverage products. UV light applications are used for odor control, sterilization, and elimination of Volatile Organic Compounds (VOCs) and industrial exhausts containing solvents. The use of UVC in odor control has many applications, including wastewater plants, farms, commercial kitchens (HVAC), and food processing plants. UV light also plays an important role in Agriculture (animal husbandry).

STER-L-RAY® Germicidal Ultraviolet (UV) Lamps are shortwave, low-pressure tubes that produce ultraviolet wavelengths lethal to microorganisms like bacteria, mold, virus, and algae. It’s a non-chemical approach to disinfection that is cleaner, faster, and more effective than other methods. It effectively reduces (and even deactivates) deadly pathogens.

Ultraviolet has been used for years to disinfect and sanitize drinking water, wastewater, air, and food contact surfaces—and was approved by the Food and Drug Administration (FDA) for the “cold pasteurization” of juice. It’s also a fast method, treating 4,000 liters of juice in only 24 seconds, according to Food Safety News.

According to the FDA, UVC at 200 to 280 is within the “germicidal range” as it “effectively inactivates bacteria and viruses.” This is due to DNA mutations that occur when UV is light is absorbed by DNA molecules.This type of radiation comes from the sun, as well as artificial means, and becomes increasingly dangerous to humans as wavelengths become shorter.Back in 2001, following E. coli outbreaks involving unpasteurized apple cider and other fruit juices, the FDA approved the use of “cold pasteurization.” The issued rule required most juice-manufacturing companies to follow Hazard Analysis and Critical Control Points (HACCP) controls, UVC’s use being an acceptable method. That rule went into effect in 2002 but excluded small juice makers, with those companies being included in the rule in 2004.

The application that has gained the industry’s attention is packaging decontamination. The first machine for cup sterilisation was installed in 2006 at Nestlé Waters France.

UV Applications in Food and Beverage

Disinfection: The most common application of UV in water treatment. UV systems can significantly reduce the microbial counts by providing 4-log Virus deactivation in the influent stream.

TOC Reduction: In ultrapure water systems, UV treatment is used for the effective reduction of organics, commonly referred to as TOC.

Ozone Destruction: Commonly used in the pre-treatment area of a water system as well as for sanitizing process and recalculating systems.

There are three types of UV rays:

The atmosphere does little to shield these rays—most UVA radiation reaches Earth’s surface.UVA rays cause skin aging and eye damageand can lower your body’s ability to fight off illness. UVA rays also contribute to the risk of skin cancer.

The Earth’s atmosphere shields us from most UVB rays—the amount of UVB rays that reach the Earth’s surface depends on latitude, altitude, time of year and other factors.UVB rays cause sunburns, skin cancer, skin aging, and snow blindness (a sunburn to your cornea that causes a temporary loss of vision) and can lower your body’s ability to fight illness.

UVC rays do not reach the Earth’s surface because they are completely absorbed by the atmosphere. Harmful effects from UVC rays are minimal.

UV technology is a versatile food technology that brings novel and exciting opportunities to the food industry. As things stand, the main limitations for PL industrial developments have been largely solved and the first industrial uses have now appeared in the market. These successful cases have revealed that treatment optimisation in the function of the application and the characteristics of food or material is key. Based on these new technological developments and current figures, progressive growth of UV light industrialization is expected shortly.