An Overview- The Growing Yogurt Market in India 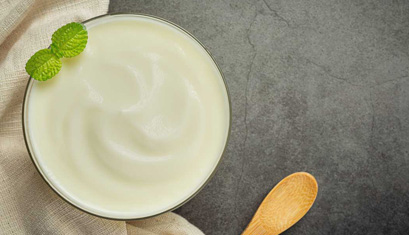 Yogurt is also known as Dahi in India and has been a part of the human diet for several millennia. For ages, making yogurt was the only known safe method for preserving milk, otherthan drying it. Scripts from Indian Ayurvedic, dating from about 6000 BC, refer to the health benefits of consuming fermented milk products. It is even rumored that the Indian emperor Akbar liked to spice up his yogurt with cinnamon and mustard seeds (1).

There are more than 700 yogurt and cheese products found in Indian cuisine (2). Today’s yogurt products come in a variety of fat contents, including: low-fat (made from low-fat milk or part skim milk with between 0.5 and 2 percent milk fat) and non-fat (made from skim milk with less than 0.5 percent milkfat) (NYA 2019). Yogurt also comes in many forms, such as traditional, Greek, whipped, drinkable, and fruit on the bottom. Consumption patterns of Yogurt vary greatly from nation to nation, however in general it is significantly low in India. As Yogurt is a good source of protein, calcium and probiotics this low consumption represents a missed opportunity for a healthy lifestyle.

Similar to the majority of the Food industry yogurt market too comprises both Organised and Unorganised with the later dominating the market. Organised Yogurt market is further  segmented into Retail Yogurt Market and Yogurt Service Market. Both the markets are divided in Spoonful Yogurt and Drinkable Yogurt in which Spoonful has bigger pie(2).

Presently Indian consumers are shifting from unpackage or lose Yogurt to packaged one. Indian retail yogurt makers and yogurt chains are helping Indians in this transition by providing varied flavors and toppings options.

In the Retail Yogurt market, players like GCMMF, Mother Dairy, Nestle India and Parag Milk Foods have held more than 50% of the market. On the other side, Yogurt service chain market, Flavours24, Cocoberry, Red Mango has constituted 30% of the service chain market. The first Greek Yogurt in India was launched by the Drum Food International under the brand name Epigamia. It was followed by Nestle In 2016 and Danone in 2017. Cocoberry founded in 2009 is the first indian-based Yogurt service chain. Red Mango based in the US came to India in 2012.

Major retail yogurt makers that operate in India are:

Major yogurt chain that operate in India are:

Major yogurt chain that operate in India are:

According to Mintel estimates, the retail yoghurt industry in India is forecast to grow at a high compound annual growth rate (CAGR) in the next few years, making India one of the fastest growing markets in this category. Based on the fieldwork in May 2018, Mintel research reveals that almost three in four Indians have consumed yoghurt in the three months, this high consumption reflects the scope for segment growth.

There is a huge opportunity for Yogurt makers in India by launching new flavors or offering yogurt as a guilt free snack by adding toppings like granola, nuts etc. The other way is fortification or addition of probiotics in the existing range. Marketers have to spread about intestine health benefits and introduce yoghurt as part of their daily meals. With the increasing fitness and switch to healthy alternatives trend especially among Indian youth there is a lot of scope for organised Yogurt market in India.