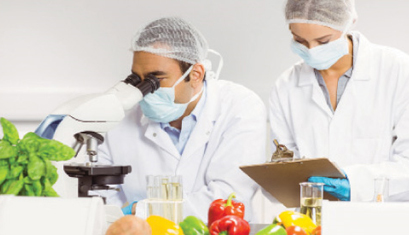 Food additive may be injurious to health and are liberally used. With a change in lifestyle, fast foods were patronized by many ignorant health hazards.

Food fraud is one of the major challenges in the fast growing food industry. This is one of the risks gaining attention from industry, governments, and standards-setting organizations is fraud conducted for economic gain by food producers, manufacturers, processors, distributors, or retailers. It is considered to be foremost economic issues to the world. Prevention of Food Adulteration Act, 1954 which now comes under the umbrella of Food Safety and Standard Authority of India (FSSAI) has defined adulteration as mixing other matter of an inferior and sometimes harmful quality with food or drink intended to be sold. As a result of adulteration, food or drink becomes impure and unfit for human consumption.Adulteration results in a change of the identity and/or purity of the original and purported ingredient by substituting, diluting, or modifying it by physical or chemical means. The different types of food frauds are shown in the figure.

A food is said to be adulterated if:

India is the largest producer of milk but still India accounts for a negligible share in the worldwide dairy trade. This is mainly due to poor quality of raw milk. The ever increasing rise in domestic demand for dairy products and a large demand-supply gap has resulted in prevalent milk adulteration. It has been feared that over 60% of the milk consumed is adulterated. A survey by FSSAI in 2012, found that 68% milk sample were adulterated in which 31% were from rural areas. Of these 16.7% were packet or branded milk and rest were loose milk samples from dairies. In the urban areas, 68.9% milk was found to be adulterated with water, detergent, urea and skim milk powder. In Uttrakhand, 88% milk was found to be adulterated.

Food safety is one of the major concerns in every country regardless of the economic and social development. Food adulteration needs to be constantly inspected starting from farmers to the time it reaches the consumer, so there is need of a method that could be employed to check and detect added adulterant rapidly without undergoing much cost to ensure the safety of food. It is also of concern to food processors that do not wish to be subjected to unfair competition from unscrupulous processors who would gain an economic advantage from the misrepresentation of the food they are selling.

There are different methods used for detection of adulteration of food and its products. Some of the successfully applied food authentication techniques are spectroscopy (UV, NIR, MIR, visible, Raman), isotopic analysis, enzyme-linked immunosorbent assay, chromatography, polymerase chain reaction, electronic nose, chemometric and thermal analysis. Food safety is a serious problem all over the world particularly in developing countries. There is a increasing requirement for more precise and sensitive detection method to cope the more subtle adulterations in food. Above listed methods are time consuming and costly. So, it is also necessary to develop rapid kits for detection of adulteration in food at farm level, which will fast and accurate.

Various studies conducted over this issue have revealed that there is a lack of strong regulatory controls, weak infrastructure for transport, storage and refrigeration and increasing consumer demand for fresh produce have led to an increase in fraudulent practices to increase shelf-life of food products. Food adulteration can have a detrimental impact on the health of a population, as adulterants can lead to developmental defects, chronic diseases, or death. So, there is an urgent need to create awareness and access to information which can play a vital role in the regions to overcome this issue.