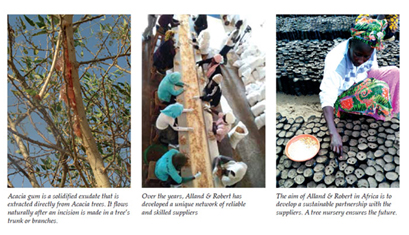 A natural and safe additive yesterday, today and tomorrow   *    By Ian Healey*

Acacia gum has been used since 2650 BC, at the time of ancient Egypt, when it was used in the manufacture of bandages for mummies. Acacia gum is commonly known in the industry under various names: GumAcacia, Gum Arabic, Acacia Fiber, E414. This natural product is multi-functional.It can be used in the food industry, in the pharmaceutical and cosmetic industries as well as for technical needs.

It is natural, healthy and without any negative impact for our Health. Acacia gum has been used for many centuries. Egyptians were already using it in the 17th century B.C. Gum acacia had its own hieroglyph,translated as “Kani”, which gave the word “Koum” and finally “Gum”. We started to call it “Gum acacia” from the time Arabia exported it. Acacia gum was finally brought to Europe in the Middle-Ages by Italian merchants.

Alland & Robert, a family business based in Normandy, founded 133 years ago, is today an international leader in Acacia gum, an all-natural additive or ingredient mainly used in the food industry. In 1884,the chemist Francisque Alland and his partner, Alfred Robert, created a company to market acacia, which was primarily used in the textile industry at the time. Five generations and many developments later, Alland & Robert registers a 40.6 million Euro turnover (2016), employs 70 people and contributes to the livelihood of several million people living in Sahelian Africa where acacia-producing countries lie.

Over the years, Alland & Robert has developed a unique network of reliable and skilled suppliers through the “Gumbelt”, the region of Acacia gum, which extends from Senegal to Eritrea, giving the company faultless traceability of its production. Frédéric Alland, CEO of the company, travels several times per year to these countries where the farmers are and he has close links with local communities, in order to guarantee sustainability and quality of the supply of raw materials and to ensure an ethical and clean production process.

Indeed, the aim of Alland & Robert in Africa is to develop a sustainable partnership with the suppliers and to ensure that its social and safety practices, but also its ethic and the environmental compliance, are applied in the same way as they are in France. The company implemented an ethical charter to ensure this. It was updated in 2015 and must be signed by the African suppliers every 5 years.

Use of Additives in Food and why Acacia Gum is Safe

Acacia gum is classified as a multifunctional food additive (E414). It is used as a glazing agent for sweets and pharmaceutical products, an emulsifier (in oils and lotions),a stabiliser (in drinks including wine, mascara, eye liner and other products), a carrier (flavourings) and as dietary fibre (diet products). According to current research, the number of possible applications is set to rise. For example, Acacia gum could be used as a texturing agent, providing an alternative to the animal-based ingredient used in certain products.

Tiny amounts of Acacia gum are found in a multitude of day-to-day products. Its many functions ensure it has a wide array of uses and Alland & Robert continues to innovate with Acacia gum to meet its customers’ demands. Guaranteed to be 100 percent plant based, GMO-free, pesticide-free, odourless, colourless, very low-calorie and gluten-free, Acacia gum has a bright future ahead of it! Neither the American FDA nor the Joint JEFCA (FAO/WHO Expert Committee on Food Additives) has set a maximum daily intake (ADI – Acceptable Daily Intake).

Additives are added to food products in order to improve their shelf life, colour, taste or appearance. Additives may be natural or chemical in origin, such as modified starches. Under conventional labelling rules, additives are indicated with an E-number. The number that appears immediately after describes what the food additive does:

While the term ‘additive’ on its own can arouse fears, it is nevertheless important to distinguish between products based on their source and their impact on health. In fact, some additives are completely natural, absolutely safe for the body and eco-friendly. Such is the case for Acacia gum, a completely safe additive that has many functional properties.

An unmodified natural plant fibre, Acacia Gum is a solidified exudate that is extracted directly from Acacia trees. It flows naturally after an incision is made in a tree’s trunk or branches. In addition to being a fully natural product, its harvest is also 100 percent natural. A rarity in the agrifood business, acacia gum can only be harvested from wild trees, the majority of which are found in Africa, in the southern Sahel.

Alland & Robert strongly believes in the naturalness of the product and helps preserve its qualities by conducting strict audits of its suppliers throughout the whole production process and ensuring harvesters have good working conditions. This same level of control also applies in the company’s plants that process the Acacia Gum, which remains natural until it is sold because its composition is not altered at any time. No additives are introduced from harvest to sale.

Régis Peltier, agroforestry expert in the Centre for International Cooperation in Agronomic Research for Development (CIRAD), notes that “gum farming generates a cash income for farmers that can sometimes represent up to half of their monthly incomes. It allows them to pay their children’s school fees, buy drugs or different supplies for example.” He adds that this additional income is vitally important for these sub-Saharan populations, with many of them just about surviving.

According to Nora Berrahmouni, forest expert at the FAO:

“Acacia is a tree that offers many advantages. It nourishes the soil by capturing basic nitrogen which restores fertility it offers shelter and shade to farmlands; it produces the gum Arabic which has an international market, making this tree profitable for the economy. It also supplies fodder for stock and food for local collectivities.”

The tree therefore acts as a barrier to desertification while nourishing soils, making it more fertile. As a result, Acacia Gum farming is doubly beneficial because it generates both an income for the farmer and productivity growth for other crops.

Acacias are used to reforest deserts and play a role in preserving biodiversity, in addition to being a major socio-economic boon to local populations. Finally, Acacia trees feed the soil and restore its fertility, lend shade to crops, provide fodder for livestock and help feed local communities.

Acacia gum has the characteristics of a polysaccharide with very particular properties: this molecule is notably used to emulsify and stabilise essential oils. For the team working under Professor Sanchez at the IATE (Agropolymer Engineering and Emerging Technologies) laboratory at Montpellier SUPAGRO, “It also has the characteristics of a fibre, which gives it valuable nutritional properties.”

Thus acacia gum is a multifunctional additive that can be used as a coating for confectionery or pharmaceuticals, an emulsifier (oils, lotions), a stabilizing agent (drinks like wine, as well as mascara and eyeliner), a medium (aromas) or a fibre (dietetic products). Acacia gum is found in small doses in a large number of everyday products, including wines, candies, cosmetics, soft drinks, flavourings, paint and pharmaceuticals. It can also be employed as a texturising alternative to the animal-based ingredients used in some products.