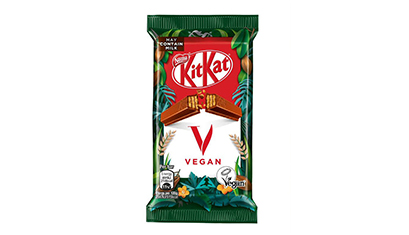 Fans of KitKat across Europe will soon be able to take a plant-based break. That’s because KitKat V, the vegan version of the iconic treat, is launching now in 15 European countries.

The wider launch follows a test in the United Kingdom and some other countries in 2021 that confirmed what social media users had been saying already: a vegan KitKat would be a hit!

The new KitKat V was developed by chocolate experts at Nestlé’s confectionery research and development center in York, UK, the original home of KitKat. Combining Nestlé’s expertise in chocolate innovation and non-dairy alternatives, they managed to perfectly blend the smooth chocolate with plant-based ingredients.

Louise Barrett, Head of the Nestlé Confectionery Product Technology Center in York, says: “Last year, we took the decision to produce KitKat V in our R&D production facilities so we could bring the product to the shelves much faster and test with our consumers. The response from consumers was overwhelming, and we are now excited to launch it at a much wider scale.”

KitKat V is certified vegan and made from sustainably sourced cocoa through the Nestlé Cocoa Plan, with Rainforest Alliance certification. The milk in the original KitKat is replaced with a rice-based alternative, which gives the perfect texture and flavour. It still offers the perfect balance between the crispy wafer and smooth chocolate that people know and love.

The new vegan KitKat will be produced at Nestlé’s confectionery site in Hamburg, Germany. It will be sold in 15 countries across Europe including Germany, the United Kingdom, France, Austria, Denmark, Sweden, Finland, Latvia, Lithuania, Estonia, Greece, Portugal, Poland, Hungary, and the Netherlands.

Corinne Gabler, head of confectionery for Europe, says: “We are seeing a strong trend in food with more people looking for plant-based options, including for treats. This is one of the biggest launches ever of a vegan alternative of a major confectionery brand and it shows our confidence in this trend. We’re delighted to offer KitKat V to all those KitKat fans out there who asked us to make it happen!”

Surveys across the globe have shown that people are interested in exploring more plant-based foods across various categories. The company is helping them embrace a more plant-based diet, with options for all kinds of meals and occasions – from breakfast to a coffee with friends, to a snack on the go, a sit-down meal with family or for an occasional treat.
In addition to vegan confectionery, recent innovations include plant-based alternatives to meat and seafood, ready meals and pizzas, dairy alternatives, coffee mixes and creamers, chocolate and malt beverages, ice cream, cheese and more.