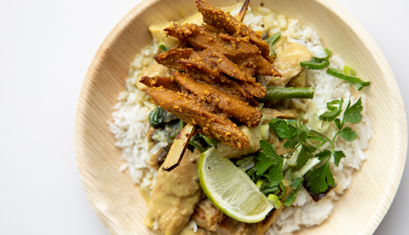 The global food industry  is  facing  the enormous  challenge  of  feeding  a population of 10 billion people, a number we are expected to reach by 2050.

Our food supply chains are very complex, comprising multiple steps, from the farm to storage, transport, processing, retail and ending eventually on the consumer’s plate. The way we produce out food takes its toll on the planet, taking up 70% of the world’s available freshwater for agriculture in addition to a tremendous amount of energy, and contributing to nearly a quarter  of global green-house gas emissions. Despite all of this, one-third of all food produced ultimately goes to waste.

With population growth comes an expected change in demographics. A shift towards more urban lifestyles, with the majority of the world eventually living in  cities,  suggests  an increase in purchasing  power.  With the growing awareness among consumers of balanced and protein- rich diets, there is a tendency towards putting as much protein on the plate as possible. Looking at our existing protein value chain, it is estimated that with livestock farming, 45% of protein produced worldwide is lost during the conversion of plant protein to animal protein. Beyond these inefficiencies, the overproduction of animal-based protein for human consumption has been the leading cause of the most recent pandemics, from COVID-19 and SARS to swine flu and bird flu, among many others.

Today, consumers are compelled to reconsider their food choices and look for alternative sources of proteins. Moreover, they are exploring a wide range of foods and expect more choice in the products available  on the market. Researchers around the world are therefore looking for novel proteins sources which could be used for human consumption. In this race, plant-based proteins top  the  charts  as they are becoming increasingly popular among consumers. Through twin-screw extrusion technology, it is possible to use plant-based protein sources to create products that mimic animal-based meat such as chicken pieces, burgers, pulled pork, tuna,  etc. Pioneering food producers have had huge success with recent plant- based meat market launches and the enthusiasm of consumers in buying such products is in turn fueling the plant-based revolution.

It is expected that, by 2040, the global protein market share will be dominated by alternative proteins,  including  both plant- based and cultured meat, leading to a  considerable  reduction  in traditional meat products. This has intrigued many companies from the traditional meat and dairy industries, encouraging them to diversify their portfolios and cater to the needs of the market. According to the 2019 ‘US State of the Industry Report’ by the Good Food Institute (GFI), between 2017  and 2019 there was a 31% increase in the retail sales of plant-based meat, compared to only 5% for animal-based meat products. This explains the actions of food giants like Nestlé, PepsiCo and Kraft Heinz who are stepping into plant- based meat sector. Additionally, many traditional meat producers such as Tyson and Hormel have launched their own plant-based meat brands such as ‘Raised & Rooted’ and ‘Happy Little Plants’ respectively. 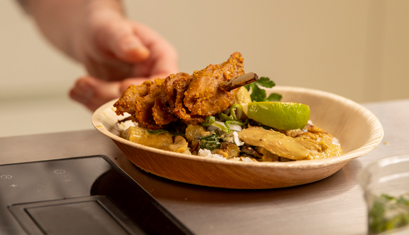 The role of technology in mimicking meat:

Despite the existing concerns in the food system, and especially in the protein value chain, it is still a challenge for consumers to fully shift to plant- based diets. People love the sensory experience involved in eating meat, not only from the flavor but also from the texture of the product. The bite and chewiness that is provided by a meat product is missing in traditional meat alternatives such as tofu and tempeh. Extrusion is the leading technological solution used in the production of plant-based meats, which enables alternative sources of protein to be transformed into meat-like products. With the advent of high-moisture extrusion in particular, it is now possible to mimic meat products more closely. Plant proteins in their raw state are typically globular in structure. As they are processed inside the extruder, the plant-proteins are denatured due to shear loading and the increase in temperature, which re-aligns them into long fibers. The cooling die is a vital attachment to the extruder. As the restructured protein flows through the cooling die, phase separation results in a fibrous and layered structure, which is then cooled to a solid product exiting the cooling die. This meat substitute, typically a rectangular slab due to current cooling die designs, can then be further processed to create diverse products such as ground meat, pulled pork, burger patties and chicken pieces.

The cooling die is also the main bottleneck in the high-moisture extrusion process. Until now, the throughput has been limited to 500 kg/h, making it difficult for the industry to keep up with consumer demand and to compete with the high volumes produced by the meat industry. To address this, Bühler is excited to announce the launch of a new high performance cooling die, the Poly Cool 1000, with a throughput of up to 1000 kg/h. This novel solution is unparalleled in the industry and will revolutionize the production of sustainable meat alternatives and other protein products. With the ability to double throughput on one line,  the  cost  per  kilogram  of product becomes much cheaper, allowing producers to  reduce  the sales price and reach more consumer markets.

Bühler, as a complete solution provider for the meat substitute value chain, is heavily engaged in innovation in this area. Specializing in both dry and high moisture extrusion, Bühler enables its customers to find solutions with their customized recipes in order to achieve the desired layered and fibrous texture, like that of meat. Bühler’s application centers located in Minneapolis (USA), Uzwil (Switzerland), Wuxi (China), and soon in Singapore, enable customers to carry out trials for recipe and process optimization with the expert support of Bühler’s technology team. In order to cater to the growing demand, plant- based meat producers need to increase the throughput of their processes. Bühler’s unique solution of a cooling die with a throughput of 1000 kg/h makes it the market leader among state-of-the art technological solution providers. In addition to extruder systems and cooling dies, Bühler provides solutions for  pre-processing of the material using pre- conditioners. These pre-conditioners can provide an additional retention time for the raw ingredients which might  be  needed  to stimulate certain physicochemical reactions, improving the functionality of the recipe components. Bühler has several partnerships with downstream processors of the extruded product, thereby supporting customers in finding the full bean-to-burger solution.

Technological    advancements    in  the meat substitute segment have prompted numerous start-ups to launch in this market. According to the GFI report quoted above, USD 457 million was invested in the plant-based sector in 2019 alone. Hence, the growth in this segment is an indicator of the growing interest from consumers for such products.

Current popular plant-based meats in the market are produced from soy or pea protein-based recipes. For high- moisture extrusion for example, basic products can be formulated by mixing 33% soy protein concentrate with 66% water, or 45% pea protein isolate with 55% water in the recipe. The extrusion conditions also differ depending on the recipe. Typical temperatures need to reach up to 145-150 °C when extruding soy protein concentrate, while for pea protein isolates, temperatures are in the range of 130-145 °C. The configuration of the screw elements are also adjusted depending on the protein sources in order to provide the necessary amount of shear loading inside the extruder. These process parameters are optimized thanks to experience and scientific understanding.

Other protein sources gaining popularity more recently are chickpea, lentil, potato, fava bean, and mycoprotein, which all have great nutritional properties and can be used to produce meat-like structures. With the advancement of fermentation technology, single-celled proteins such as algae, yeast, and bacteria will become more important in the near future.

In conclusion, scientists and industries around the world are continuously engaged in exploring the nutritional and functional aspects of alternative protein sources in order to make our protein value chain more efficient. Meat substitutes present an unparalleled opportunity for sustainability in our food systems. With the new PolyCool 1000, Bühler proves it is committed to leading the way in developing the best solutions for the alternative protein industry.