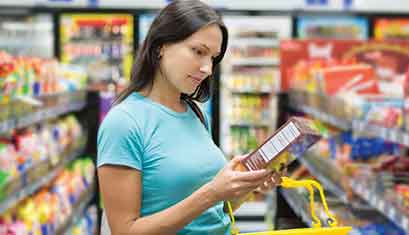 Salt, or Sodium Chloride (NaCl), provides one of the five basic tastes, and one that consumers love saltiness and salt contributes both flavour and functionality in a wide range of applications. Not only does salt make foods taste salty, but also aids in food preservation and food safety, offers a variety of functionalities in a wide range of applications, and contributes other taste properties that are not easily replicated by other available ingredients. Sodium itself,  is a  very potent inhibitor of off-tastes, particularly the bitter tastes, and so, one of the reasons salt is added to so many different foods is because it helps reduce the off-tastes, the bitter tastes, and thereby enhances other tastes. Researchers suspect there is at least one other mechanism that accounts for the sensory properties contributed by salt, salt also improves mouth feel in foods by increasing the thickness and body of foods and makes them taste richer. In meat products, it solubilizes protein and enhances hydration. In cheese, it helps to regulate enzyme activity and also enhances texture .Salt / sodium is a vital part of the cheese making process, as it controls moisture, texture, taste, functionality and food safety It controls the yeast activity in yeast-leavened breads and also strengthens gluten so doughs are more machinable. Salt exerts a preservative effect in foods because it lowers water activity. Although few foods today are preserved by salt alone, in some products salt is considered one of the multiple hurdles used to reduce microbial activity in foods.

In developed country diets, a large proportion of the sodium ingested is added (as sodium chloride) in food manufacture and foods eaten away from the home. James, Ralph & Sanchez-Castillo (1987) and Mattes & Donnelly (1991) estimated that for the United Kingdom and USA, about 75% of sodium intake was from processed or restaurant foods, 10– 12percent was naturally occurring in foods and the remaining 10–15 percent was from the discretionary use of salt in home-cooking or at the table. According to the Center for Disease Control and Prevention (CDC), Atlanta, USA more than 40 percent of sodium intake in USA comes from 10 food categories—breads and rolls; cold cuts and cured meats; pizza; fresh and processed poultry; soups; sandwiches such as cheeseburgers; cheese; pasta dishes; meat-mixed dishes such as meatloaf; and salty snacks like chips, pretzels and popcorn.

Consumption of Salt / Sodium in India:

The World Health Organisation has recommended a daily intake of 5gm of Salt per day per person or 2400mg of Sodium per day per person. This is the norm considered for the Indian population. Based on the study carried out by Mrs. Mini Thomas and Dr. E. Kannan, Associate Professor, Dept of Clinical Nutrition & Dietetics, PSG College of Arts & Science, Coimbatore, following can be concluded is the overall consumption of Salt or Sodium among Indians in the Indian Sub-continent. 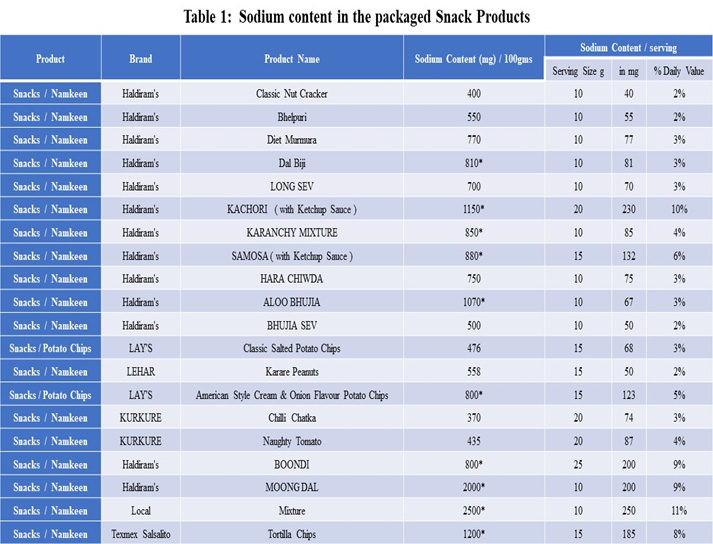 Sodium content in the packaged Breakfast, Soups and Ready to Cook Products 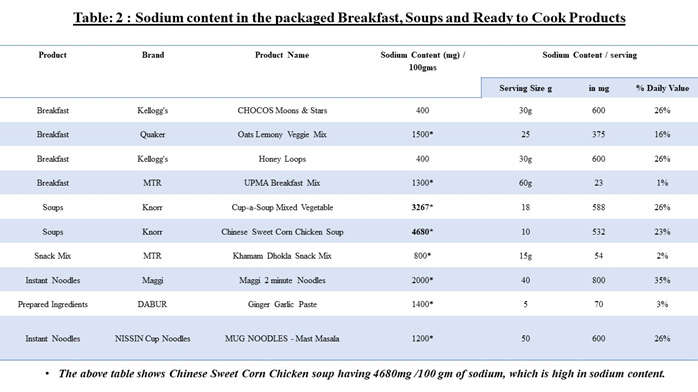 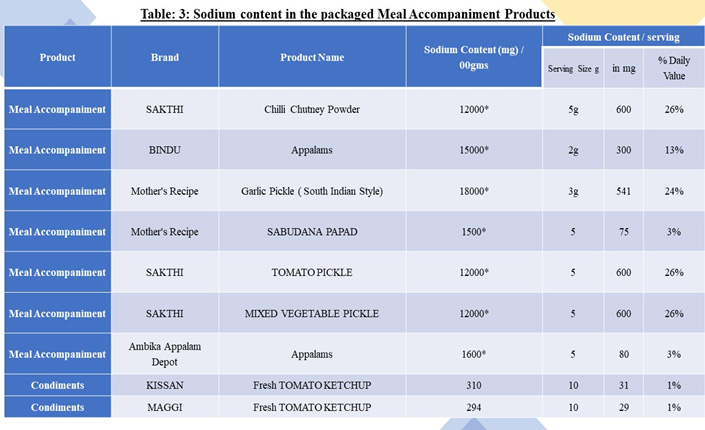 The above table depicts the sodium contents of the commonly consumed snacks / Packaged / processed foods. The commercial products analysed had a sodium content ranging from 294mg / 100 gm of Tomato ketchup to 18000 mg / 100 gm of Garlic pickles. The appalams which are used as accompaniments along with main course of menu among south Indian, are found to have 15000 mg / 100 gm. 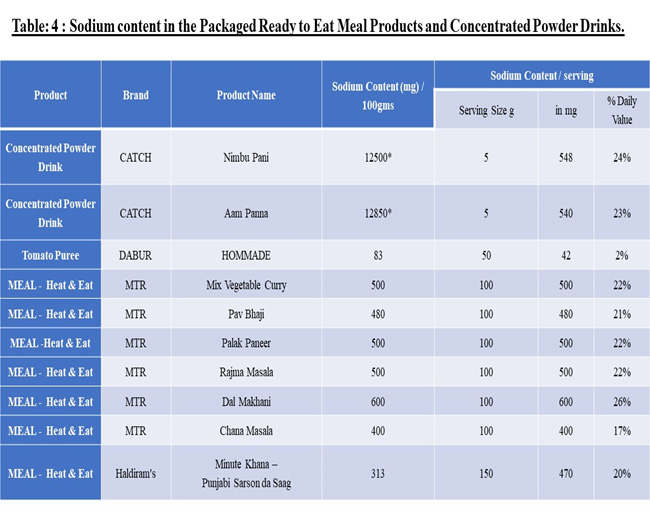 Hence based on the above analysis the packaged processed foods available in the Indian Market having high Sodium content (in the descending order) are as follows :

The World Health Organisation has recommended a daily intake of 5gm of Salt per day per person or 2400mg of Sodium per day per person. This is the norm considered for the Indian population.  Based on the study following can be concluded is the overall consumption of Salt or Sodium among Indians in the Indian Sub-continent.

The author is Clinical Dietitian, Nutritionist, Nutrigenomic Counselor (NIN) and Diabetic Educator and can be reached at minithom@rediffmail.com