Quick Bites for a Fast Generation 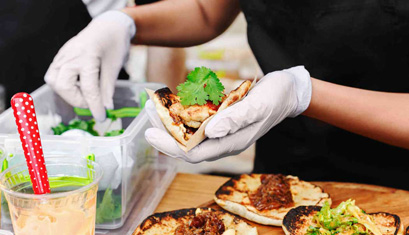 Quick Service Restaurants are exclusive.  They form an essential part of the Indian Food Service Industry. QSRs (Quick ServiceRestaurants) offer fast food cuisines as well as minimal table service catering to the demands of young customers and  working professionals alike.  For these restaurants the winning factor is the quick delivery of food items which is a necessary component for a demanding clientele such as in India;  and within the age group of 16-35 years, as people of this age group are interested to taste fast food new cuisines on a daily basis.

The Quick Service Restaurants (QSRs) market in India is expected to rise at a CAGR of about 18% from 2021-2025 because of increasing urbanization, an expanding  young and working population, and also a growing number of dual income families. QSR market is broadly classified into Food & Beveragessegments where the food category holds the major share in the market. However, the beverage sector is formulated to grow at a faster pace in the upcoming years in terms of technological advancements.

North India most dominated the country’s QSR market in the year 2019.

The QSRs market is expected to reach USD 95.75 billion by the year 2025. This food service sector in India is a vibrant growing market that has seen exceptional growth during the past few years and is expanding rapidly, driven by a high percentage of youngsters.

A recent report mentions that market for chain  restaurants which includes cafes as well as quick restaurants will grow at almost 20% reaching Rs. 51,000 crore ($8bn) by the year 2021.  The rapid growth in quick service restaurants is because of an increase in customers’ tendency to eat out, as noted in the report.

Delhi and Mumbai contribute about 22% of the total food services market. The top five players in the QSR market accounts for almost 70% of the market which consists of Domino’s comprising almost 30% of the outlets. There are various domestic and international brands which are entering the market. There are almost 100 chain cafes and bakery brands with about 2,800-3,000 outlets spread all over the country.

Major players in this field

McDonald’s Corporation was founded in 1940 as a restaurant which was operated by Richard and Maurice McDonald, in San Bernardino, California, United States. This is the world’s largest restaurant chain by revenue, which serves almost 69 million customers everyday in almost 100 countries over 37,855 outlets.

In India, McDonald’s is managed by Amit Jatia, M.D. Hardcastle Restaurants Pvt. Ltd. who owns McDonalds in West & South India.and Vikram Bakshi’sConnaught Plaza Restaurants Private Limited which owns and manages McDonald’s restaurants in North & East India. It has almost a network of 160 restaurants all over the country.

Burger King is an American multinational company of burger fast food restaurants. It has its headquarters in Miami-Dade County, Florida, was founded in 1953, as  Insta-Burger King.  Was renamed  Burger King by David Edgerton and James McLamore who purchased the company.

After almost 15 years of Burger King in the US, Canada and North-west Europe, the brand now has a flourishing business in India.

Domino’s Pizza was founded in the year 1960;  is a globally popular brand  recognised as a world leader in pizza delivery in the United States and also internationally.

In 1996, the first Domino’s stores was set up in New Delhi. Domino’s Pizza in India focuses to deliver great tasting Pizzas of superior quality.

Subway India, is the second largest Quick Service Restaurant in India which is looking to cross its 700 restaurants mark by this year or the upcoming year. It is noted that the American QSR chain has almost 660 restaurants in India. All Subway restaurants are owned and managed by 400 association in the country.

After Covid how have QSRs  been doing?

With the world staying at home during the lockdown period, cafes and restaurants were also closed and the QSR industry was hit  really hard. Although a few quick service restaurants gained popularity and demand for takeout as well as, delivery.

QSRs are manage hygiene and safety norms and have installed strict protocols, have provide hand sanitizer and thermometers as well as have trained their employees to minimize human contact. QSR also strives to meet new consumer needs. They have made themselves perfect in terms of delivery and convenience and are mainly available on Swiggy and Zomato in spite of having their own apps.

QSR chains have clearly benefitted from their strong digital presence and  customer shift to branded foods. They will continue dominating the entire food service market in India as they gets deep into the tier-2 and tier-3 markets. They constantly communicate with their customers, specially the most loyal ones, who will be their best lever to increase  demands.