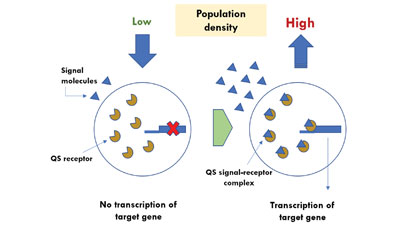 What is quorum sensing?

Quorum sensing(QS) is cell-to-cell communication system in bacteria.  It occurs due to the production, secretion and sensing of extracellular molecules or signals, called as autoinducers (AIs). The AIs take parts in many physiological metabolic processes of cells, such as bioluminescence, biofilm formation, bacterial virulence, antibiotic production, motility, sporulation etc. The process of QS starts whenever bacterial cell number increases beyond a particular point, known as threshold concentration. The signal molecules (AIs) interact with the bacterial receptors in the process of cell-to-cell communication (Figure 1).

Figure 1: An overview of population dependent quorum sensing among bacteria

How was quorum sensing discovered?

Quorum sensing was first described in1970, by Kenneth Nealson, Terry Platt, and J. Woodland Hastings in the bioluminescent marine bacterium- Vibrio fischeri through the identification of “autoinducing” activity in the high density bacterial cell medium. Initially, they ascribed this conditioning of medium is due to the growing population of cells and termed this phenomenon as “autoinduction”.

When do bacteria use quorum sensing?

Biofilm formation: Biofilm formation occurs in the bacteria through the production of extracellular mucopolysaccharides and adhesion matrix. The biofilm formation on the hospital devices, pasteurization plants, teeth surfaces and other pathological tissues may pose major public health risk and ultimately bacterial drug resistance. The biofilm acts as an effective drug barrier and reduces antibiotic permeability. In microenvironment of biofilm, bacteria produce heterogeneity (difference in nutrient concentration and bacterial secretion) and regulate the drug resistance. The extreme environmental changes outside the biofilm, such as changes in temperature, pH and concentration of certain chemicals regulate the physiological and biochemical functions of bacteria by reducing its growth efficiency and forms a state of resistance to antibiotics (Zhao et al., 2020).

How does quorum sensing work?

To regulate gene expression as a response

Gram-positive bacteria bacteria have a thick peptidoglycan membrane but it doesn’t contain outer lipid layer. Whenever the concentration of corresponding AIPs in the immediate environment exceeds to the threshold level, the AIPs binds to the receptors of cell surface and activates the two-component phosphokinase system (TCS) to initiate the corresponding signal transduction and finally gene transcription. The two-component signal transduction system (TCSTS) comprises of response regulatory protein AgrA and transmembrane sensor kinase AgrC. For example, accessory gene regulation (AGR) in Staphylococcus aureus is associated with AIPs secretion. Another possible mechanism includes, AIPs may be transported into the cytosol, and binds directly to the transcription factor to initiate or inhibit transcription (Zhang et al., 2019) (Figure 2a). 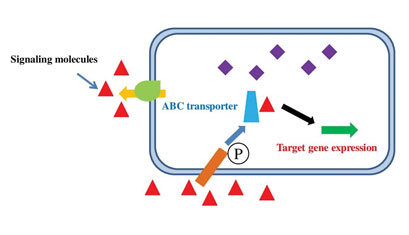 Gram-negative bacteria have a thin peptidoglycan membrane and a outer lipid layer. The AHLs regulate QS by binding the enzyme (LuxI-type synthase) to the LuxR-type receptor regulatory protein. AHLs are membrane permeable molecules and diffused to the exterior of cell membrane randomly. After exceeding the threshold concentration, the molecules diffused through the cell membrane and bound to the amino terminus of LuxR receptor proteins in the cytoplasm to form the LuxI/LuxR protein complexes. The complexes regulate the expression of certain functional genes and have a feedback regulation effect on the production of AHLs signal molecules and their receptor proteins. The LuxI/LuxR two-component system of V. fischeri is considered as the model system for Gram-negative bacterial QS and played important role in luminescence phenomenon (Zhang et al., 2019) (Figure 2b). 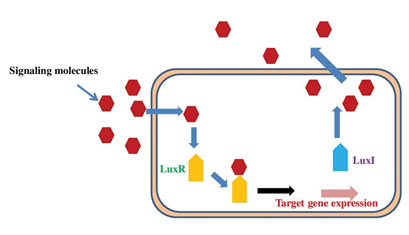 The AI-2 signaling in the bacterial strains is catalyzed by enzyme LuxS synthase. LuxS synthase is also involved in the methyl cycle activation and reported to control expression of 400 more genes associated with bacterial physiological processes, such as surface adhesion, motility and toxin production (Zhang et al., 2019) (Figure 2c). 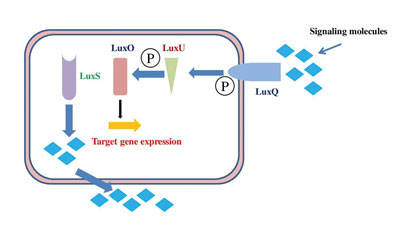