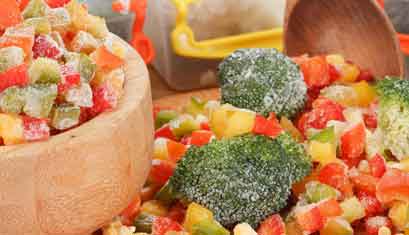 The most easiest, quickest and convenient method to preserving food is freezing. If the food products are properly frozen then their original colour, texture and flavour is more maintained than food preserved by other methods. The initial reason of packaging is to keep food from drying out and to maintain its nutritive value, flavor, texture and color. Labels on packages will say if the product is suitable for freezer storage.

A good packaging material should have the following characteristics:

Following are some of the popular frozen food packaging materials.

We all enjoy convenience, so once in a while buying a pack of frozen meal in your shopping cart is reasonable. However, frozen food should note be in our habit because it has also various adverse effects in our daily life especially for our health. Frozen or packaged food is like a pause button which slows down any enzymatic reaction and increases the shelf life. As per demainding work life culture and also because of our surrounding we tend to consume frozen food.  It is also used when the adults are too exhausted by the end of their day culture to cook fresh food. It has been surveyed that the Indian frozen market reached a value of INR 87 billion in 2019. The market consists of frozen vegetables, frozen meat products, frozen fruits, frozen vegetables, and frozen vegetable snacks. The market for frozen foods has been gaining traction in India owing to their convenience as they do not need any additional preparation and culinary expertise. The sodium content is much higher in these ready to eat meals. It adds to the increasing prevalence of lifestyle diseases like high BP, diabetes, cholesterol etc. at a very young age”.

Vitamin C: This type of Vitamin generally lost in a higher concentration than any other vitamin.. Several researches have been done to determine the cause of vitamin C loss. A vitamin loss of ten percent occurred during the blanching phase with the rest of the loss occurring during the cooling and washing stages. The vitamin loss was not actually attricuted to the freezing process. The frozen vegetables were stored at −23 °C (−10 °F) and the canned vegetables were stored at room temperature 24 °C (75 °F). After 0, 3, 6, and 12 months of storage, the vegetables were analyzed with and without cooking.

Vitamin B1: (Thiamin): This vitamin is having a higher solubility in  water and can also easily destroyed by heat. A vitamin loss of 25 percent is normal.

Vitamin B2: (Riboflavin): Some investigation proved that this vitamin, had 18 percent vitamin loss in green vegetables, while another determined a 4 percent loss. It is commonly accepted that the loss of Riboflavin has to do with the preparation for freezing rather than the actual freezing process itself.

Vitamin A: (Carotene): There is very low amount of carotene loss during preparation for freezing and freezing of most vegetables. Much of the vitamin loss is incurred during the extended storage period.

Conclusion In general frozen food has awesome shelf life and has an overall safety records. One of the main advantages of freezing preservation is the convenience and ease of food preservation with minimal impact on food quality compared to other preservation techniques. During freezing time the food placed below −12 °C and there will be no growth in food poisoning or food spoilage microorganisms. Freezing has little effect on viruses or on histamine but will inactivate nematode parasites in pork and seafood. As long as the temperature of the food is reduced to below −12 °C in a reasonable time (hours rather than days) during the initial freezing operation and not allowed to rise above 7 °C during thawing, it will generally be as safe to consume after thawing as it was before freezing. Once the product thawed, any microorganisms present can again get activated, and under the right conditions will replicate to levels that can lead to foodborne illness. Overall it is therefore very important from a food safety point of view that control measures are put in place to ensure that processing before freezing results in safe food when frozen and that the thawing process does not result in any growth of food poisoning organisms.

The author is Copy Editor in LB Associates and can be reached at fmteditorial@lbassociates.com