Fortification of foods an approach towards nutritional security 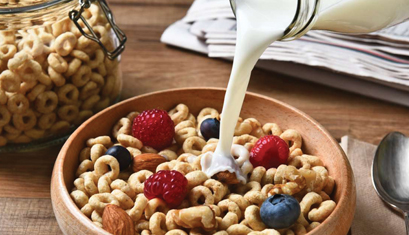 The alarming status of under-nourished population in India seeks a national attention. The wide range of ailments arising out of un-dernourishment in India and the fact that it prevails in one way or the other in almost all the age groups starting from infancy to the aged classes of population, indicates the need of effective strategies in food consumption patterns. About 1.3 billion of people in India are vitamin and mineral deficient. Deficiency of folic acid in infants below five years of age is known to cause at an estimate of one lakh deaths per year. In more than 50 percent pregnant women, the iron deficiency causes anaemia which leads to a high number of infant mortality cases. At present times, safe, hygienic and nutritionally superior foods have become the initial focus of both the food producers and the consumers. Therefore, it is the right time to come up with all the emerging approaches in both food processing as well as consumption practices. One of the similar approaches that have been a part of establishing a nutritional security is food fortification or enrichment.

Fortification or enrichment is a process by which the essentially important micronutrients such as iron, folic acid, iodine, vitamins and minerals are added to the staple foods in order to address the nutrient deficiencies in common people. These are nutrients which are either present in low amounts naturally in these foods or lost during the stages of their processing. Although the minerals and vitamins are required in very low amounts for normal functioning of the human body, however, the absence of adequate quantities could lead to serious health issues like Neural Tube Defects (caused by deficiency of folic acid), anaemia (caused by iron deficiency), poor bone health (caused by calcium deficiency), poor vision/loss of vision (caused by Vitamin A deficiency), goitre and mental disability in children (caused by iodine deficiency), bleeding gums and loose teeth (caused by Vitamin C deficiency) and so on.There are Recommended Daily Intake (RDI) levels already established for all the nutrients. However, with the current lifestyle and inadequate physical activity, the food intake of individuals has been found to be insufficient to provide the adequate levels of these essential elements. Hence, foods already enriched with the required levels of these nutrients should meet the nutritional requirements of any individual. In the Western countries, the fortification of foods had been made to be mandatory by the Government way back decades ago, but in India, the fortified foods have gained popularity in recent times and gradually gaining consumer acceptance. The Government in India has also henceforth mandated the fortification of several foodstuffs. On proper evaluation and identification of nutritional gaps in India, recently the Government bodies like the Ministry of Women and Child Development has mandated the fortification of rice in all midday meals and public nutrition programmes covered under the Integrated Child Development Services (ICDS) in India. The department also envisions the fortification of foods like wheat flour, oil, milk, salt etc. to be implemented soon.

The Food Vehicles of Micronutrients

In order to mitigate the vitamin and mineral deficiency diseases, the best way is to enrich the most common mass consumed foods of the region. In India, the concept of fortification had been in Vanaspati (fortified with Vitamin A) and salt (with iodine) since 1950’s. With increasing needs of human nutrition, this has been extended to more generally available and basic foods. Since rice and wheat are the most common staple foods and undergo losses of vitamins and minerals during the milling process hence, they have been considered as excellent food vehicles intended for the delivery of micronutrients like iron, folic acid, vitamin A, B-vitamins and zinc. Milk which is another indispensable part of human diet also undergoes thermal processing leading to losses of vitamins is most commonly fortified with Vitamin A and Vitamin D. In cooking oils like palm oil, sunflower oil, coconut oil, soybean oil etc. fortification of Vitamin A and D are commonly carried out as these vitamins are fat soluble in nature. The presence of adequate amounts of Vitamin D also help in the absorption of calcium in the body.

Since the prospective of food fortification appears as a public health responsibility, hence the entire processfollows certain guidelines necessary to yield the appropriate and intended fortification levels. The dosages of the micronutrients in the foods targeted to be fortified has to be within a range of 15-50% of the physiological reference intakes of individuals as per average daily servings and should meet at least 10% of the human physiological requirements. During the estimation of the amounts of nutrients to be added in a food for fortification, the factors like its natural content in the food, losses during manufacturing and storage and its interaction with other ingredients present in the food needs to be taken into account. Accordingly the forms, methods and stages of fortification has to be decided. Moreover, it is extremely important that the forms of micronutrients chosen are safe and do not have any adverse health effects. The foods on fortification should not intervene with the sensory profile of the desired nature of food products, for eg., ferrous fumarate and elemental iron if used for rice fortification have negative effects on color, taste as well as bioavailability, unlike other cereals.

There are several renowned players in the Indian food market like ITC, Nestle India, Britannia, Amul, Hindustan Unilever Limited, Marico India, Fortune, Mother Dairy, Tropicana, Minute Maid etc. who have already commercialised a varied range of fortified/enriched food products with vitamins, minerals, natural antioxidants, PUFAs, etc. and have made successful product claims on their labels and there are newer entrants adding up into the list.

Fortification of foods is undoubtedly a very promising approach towards mitigating the current level of malnutrition in the country. However there is a need to continuously evaluate and validate the efficacy of fortified foods on human population since with changing lifestyle patterns and eating habits, the diet of a region also gets modified dynamically. Meanwhile, this also expands the available options to fortify foods and at the same time arises the needs for regulatory changes to be made in order to introduce new fortified food products in the market. In addition to these, the clinical studies which are done to establish the efficacy of a particular fortified food also need to be designed appropriately with accurate sample size and population. Furthermore, the cost of fortification is associated with a lot of factors like the method of fortification, dosages and the nature of the food product. Therefore, there is a scope of further researches in optimising the food fortification processes.

FSSAI Caps Penalties for Returns to 5 Times The Annual Fees

The FSSAI has decided to cap penalties incurred by food businesses due to delay in submission of Annual Returns by fixing the maximum limit from fiscal 2021-22. The food authority has ordered that the maximum limit to which the penalties can go shall not exceed ‘5...
Read More

Overweight and obesity are among the highest risk factors for widespread ailments like diabetes and cardiovascular disease. To prevent these diseases, many consumers want to change their lifestyle. In addition to exercise and healthy diet routines, vitamins and...
Read More