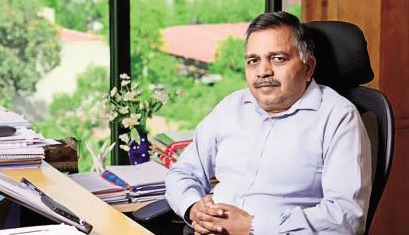 “FFRC not only enables large-scale fortification of food, but also provides technical support to food manufacturers…”

Government has been encouraging enrichment of food items with micronutrients. In an interview, Shri Pawan Kumar Agarwal, CEO, FSSAI discusses with Sagrika Sanjay, Food Marketing & Technology-India about how the FFRC (Food Fortification Resource Centre) is helping to promote large-scale fortification of food.

1 Take us back to the history of food fortification in India.

2 What are the challenges that underline food fortification?

The main challenge with fortification is around the alignment of supply and demand. When we talk to manufacturers and suppliers, they suggest that there is no demand; and when we talk to the consumers, they say that there is no supply of fortified food. To align the demand and supply figures, first and foremost, there needs to be consistent availability of fortified food in the market. Simultaneously, we need to sensitise consumers about the benefits of fortified food to generate demand. The same applies to government safety net programmes. In these programmes, you have tendering at different levels, and unless there are adequate numbers of suppliers of fortified commodities, the tenders are often not closed. Consequently, we face reluctance from public authorities to take on fortification efforts.

3 How is the FFRC helping the industries to take care of food quality and food safety to facilitate fortification?

The Food Fortification Resource Centre, established under FSSAI in collaboration with Tata Trusts, looks at the micro challenges faced by various stakeholders in taking the fortification drive forward. We are learning from the experience of some of the states on how they have been able to address these challenges and letting the other states know about it. FFRC is, hence, acting as the resource hub to bring different stakeholders to a common platform. It is proving instrumental in providing technical support to food manufacturers by enabling them to produce high-quality fortified foods; and by making available all communication material for technical, scientific and financial support to them; this will in turn enable large-scale fortification of food. It also provides tools for monitoring and evaluating the implemented fortification programmes. It has a pivotal role in organizing inputs and information on premix and equipment procurement, manufacturing and quality control of fortified foods.

4 What is the integrated food fortification programme that is reaching out to people?

We have launched ‘The Eat Right Movement’ or TERM on 10th July 2018 to persuade the masses to reduce the intake of salt, sugar and fat in their diets; and along with it, encourage the businesses to reduce these ingredients in their products. The movement with the tagline “Aaj Se ThodaKam”- led by actor Rajkummar Rao – has seven broad areas of action: to increase demand for healthier food; set standards in schools; restriction on marketing to children through a suitable regulation; higher taxation for unhealthy food through differential GST rates; appropriate menu labelling; redesign choices available at points of sale; and persuade food processing industry to formulate their food products by reducing unhealthy ingredients.

5 What is the role of key market players in making food fortified? Can you name some leading players which are adding value to the products?

The key market players have significant market presence and enjoy unflinching customer loyalty. By adopting fortification, they get the opportunity to promote public health and give back to the community. They can play a pivotal role in promoting the concept of fortification and +F logo to the customers and in the way provide the latter with healthier options. Some of the early adopters of fortification are Future Consumer Ltd., Navbharat Flour Mills, LT Foods, Cargill India Private Limited, Adani Wilmer, Mother Dairy, Kwality Dairy and Tata Chemicals. We are constantly adding more names to this list; this only boosts up our confidence of soon realising the dream of a healthier India.

6 What is consumer’s reaction towards fortified products?

Fortification of food does not change the taste, smell, flavour or appearance and rather adds to the nutritional value of staples. People can continue to stick to their traditional diets and benefit from these fortified food items that meet their dietary requirements. So far, the response has been extremely encouraging and we hope fortification will only get more traction.

7 Let’s talk about your progress towards the public, private and civic sector to expand fortification. How do you look up to expanding fortification?

At present, the inclusion of fortified staples (wheat flour, oil and DFS) in Integrated Child Development Scheme (ICDS), MDM (Mid-Day Meal scheme) has been made mandatory. Fifteen States and three UTs have adopted fortification of chosen commodities at the district or at panchayat level – providing food through ICDS, MDM and PDS. Since the adoption of the standards, 65 top companies and 110 brands of fortified staples are presently available in the open market – these have a pan India and regional presence.

8 Enlist the various regulations and guidelines for food fortification to encourage the production, manufacture, distribution, sale and consumption of fortified food.

We have operationalised the Food Safety and Standards (fortification of foods) Regulations, 2016 for staples namely wheat flour and rice (with iron, vitamin B12 and folic acid), milk and edible oil (with vitamins A and D), double fortified salt (with iodine and iron). However, as we move forward, we need to ensure quality and monitor that these staples are fortified as per standards; and that there is no misuse of our standards. Secondly, we have to continue to fine tune our standards, depending on the feedback that we receive from the studies on the impact of fortified food on nutrition for our population.

9 Despite government policy for fortification, the progress has been limited. What was the reason?

Currently, the government has made fortification of salt, wheat flour and oil mandatory in foods served to children under ICDS. This has been an encouraging step towards adoption of fortification by the States/UTs. However, more work is needed towards inclusion of other fortified staple commodities – like fortified rice and fortified milk in the government safety net programmes. This will ensure better health and nutrition for our citizens. State governments often require hand-holding support in order to implement the schemes – first, they have to be sensitised about the need for fortification and then they must be enabled to procure fortified staples in various government-aided programmes. In many of these programmes, particularly where we depend on local initiatives by the State governments, fortification is challenging to implement and takes time. Nevertheless, we have been making constant efforts to scale up fortification at a pan India level.

10 What is FSSAI’s upcoming initiative that you would like to deliberate?

We are enthusiastically looking forward to our upcoming initiative ‘Lauhyatra’, a mass movement to free India from micronutrient malnutrition. The programme is set to flag off on the 150th birth anniversary of Mahatma Gandhi (02 October, 2018), by way of an all-India Relay Cycle Expedition. We have partnered with several development partners, food manufacturers, State governments, NGOs, FSOs, industry associations, celebrities, hoteliers and restaurateurs to make this event happen. The whole idea behind Lauhyatra is to create awareness about healthy eating with a focus on consumption of fortified staples to eradicate micronutrient malnutrition.