Focus on exports can get better farm remuneration 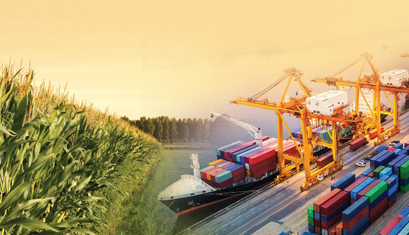 India has the potential to become the biggest producer and exporter of farm commodities owing to agriculture being engrained in our way of life and the presence of diverse agro-climatic regions. The capability to fill a large food basket presents the country an advantage while competing in the international market. India with its agro-climatic zones and skilled farming community has an edge in the production of several agriculture products such as cereals, rice, milk, buffalo meat, fruits, vegetables, and seafood.

Dr Shivendra Bajaj, Executive Director, Federation of Seed Industry of India (FSII), said, the agricultural productivity for most crops is low in India in the global context, the farm production in India is still in surplus. However, the majority of production either is consumed at the domestic market or goes waste due to inadequate food storage and processing facilities.

The lucrative export market can guarantee an increase in farm income in a short time. Two years ago, the Agricultural and Processed Food Products Export Development Authority (APEDA) had experimented with transporting Nendran Banana from South India to Dubai through water transport.

The move received positive results as it did not just make the fruit available to international customers at an affordable and cheaper rate but helped Indian farmers get better remuneration as well, states the report “Development of Sea Protocol for the Trial Sea Shipment of Traditional Nendran banana to Dubai”. The report was prepared by ICAR-National Research Centre for Banana and APEDA in 2017.

Similarly, the APEDA has tried to explore central Asia and other some South East Asian countries for markets for fruits from unexplored regions of India. These included chilies from Varanasi, chinia bananas from Bihar, mandarin orange from Arunachal Pradesh, pineapple from Tripura and banana from Akola, Maharashtra.

Many states or regions in India do not have proper post-harvest management facilities and strong transport connectivity, as well as farmers, lack awareness regarding the opportunities and benefits of export.

Local governments are more focused on providing farm inputs to farmers such as seeds, fertiliser for better crop output. However, there is a need to divert attention towards creating post-harvest management facilities such as packaging, grading and sorting – for making farmers aware of the quality requirements and their produce, particularly perishable items export-ready.

The challenge would be to transport export-oriented commodities from the areas with poor connectivity with the twin objectives of cost-effectiveness and fast delivery.

Air transport would ensure fast delivery so the freshness of perishable items would remain intact but it would add substantially to the final cost – thus making commodities vulnerable in the cost-competitive global market.

The water transport option can be considered for the exports to countries with seaports, as the freight cost is six times lower than that through air transport. However, it may not be helpful in the case of perishable commodities.

In such cases, the food processing option can play a pivotal role as it has the capacity to ensure perishable items are quality controlled and not wasted. The food processing sector is still in the nascent stage and its contribution to national GDP is less than 2 percent.

According to APEDA, India is the second-largest producer of fruits and vegetables, which are highly suitable for export. However, the processing level is not more than 10 percent. It means India and its farmers are losing precious opportunities of earning foreign currency. Similarly, India is a leading producer of fish, dairy, cereals, meat and poultry. However, the amount goes to the export is quite low.

There is a need to set up a mechanism to synchronise production, processing and exports to boost farm income and the Indian economy alike. Thus, strategic investment is required to build the infrastructure related to transportation, storage, processing and thus creating momentum in the nation’s food export.

Also, reforms in the APMC Act, adopting innovative technology, streamlining the standards for food safety norms and harmonization with international standards are among areas of key focus.

There are concerns about high tariff and duty rates, which often result in the non-competitiveness of Indian commodities. It needs to be revisited as well.