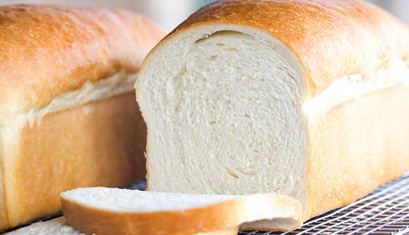 White bread prepared from white flour is a rich source of carbohydrate, protein and energy. But it has poor nutritional qualities in terms of quality protein, vitamins, minerals and fiber as germ and bran are removed while preparing white flour. Finger Millet is a rich source of calcium, fiber, minerals and good quality protein. White bread was fortified with Finger Millet Flour (FMF) by blending in the proportion of 10, 20, 30, 40 and 50% with the white flour. The enriched bread was evaluated for its physical, nutritional and rheological properties viz. loaf weight, loaf volume, specific loaf volume, carbohydrate, protein, fat, crude fiber, ash, calcium, physiological energy and crumb hardness and were found to be 431 to 470 g, 1166.37 to 1166.37 cc, 2.02 to 2.71 cc/g, 59.92 to 60.08%, 5.10 to 6.22%, 4.42 to 4.64%, 0.52 to 1.57%, 0.70 to 1.50%, 32.52 to 110.6% mg, 299.80 to 306.90 kcal/g and 124.5 to 150g. Sensory score based on appearance, crust colour, crumb colour, taste, texture and overall acceptability was highest in the white bread fortified with 20% FMF. Based on the physical acceptance, superior nutritional quality with the acceptable physical properties and rheological property, a significant fortification was found by incorporating the FMF up to 20% to the white flour.

Bread is prepared from white flour, yeast, sugar, fat, salt, water, etc. by a series of operations like mixing, kneading, fermentation, proofing and baking (Dewettinck et al., 2008). White flour, used in the bread preparation, is rich source of carbohydrate, protein and physiological energy but on the contrary poor source of fiber, vitamins, minerals and quality protein due to removal of bran and germ of the outer seed coat. Finger Millet (Eleusine coracana, Ragi) is a type of small millets. It is a rich in protein, iron, calcium, phosphorus, fibre and vitamin content. The calcium content is higher than that of all cereals. Finger Millet has best quality protein along with the presence of essential amino acids, vitamin A, vitamin B and phosphorus (Gopalan et al., 1987). So, the Finger Millet can be a good source of diet for growing children, women, old age people and patients. The bakery sector is also focusing on the use of minor millets as a source of dietary fiber and bioactive compounds (Hugo et al. 2009; Singh et al. 2012; Ballolli et al. 2014; Bhol and John Don Bosco 2014).

The present study is undertaken to evaluate the possibility of increasing the nutritional quality of bread by incorporating Finger Millet flour and its effect on the quality of bread. The Finger Millet seeds were ground in domestic mixer and sieved in 35 mesh sieve to prepare Finger Millet Flour (FMF) and the five different treatments were decided as shown in Table 1. The bread-making formulations of white bread enriched with FMF is given in Table 2. The process flow chart of bread making is given in Figure 1. The bread containing 100% white flour served as control. The HPMC was added to the bread formation as it works as a bread improver in the composite bread.

Various quality parameters were tested and the results are shown in this section.

In the present study, a significant decrease in the physical characteristics of the bread was observed with increased incorporation of finger millet flour (p>0.05 %). It might be due to a decrease in the proportion of the gluten content which is an important protein responsible for maintaining the viscoelastic property of bread dough which ensures the increased volume of bread. However there was no significant difference (p?0.05) between control and 10% FMF incorporated bread for loaf weight, volume and specific volume. From the observations, it can be seen that as the substitution level of FMF increased, the loaf weight of the bread was found to be increased. This might be due to less retention of carbon dioxide gas in the blended dough resulting in dense bread texture. Loaf volume and specific loaf volume had shown decreasing trend as the level of incorporation of FMF was increased. The decrease in loaf volume was found due to dilution effects of gluten with addition of non wheat flour such as FMF (Shittu et al. 2007). Gluten fraction of white flour is responsible for the elasticity and framework of the loaf during baking. Additionally, fiber content of the FMF also imparts adverse effect on loaf volume due to less gas retention produced during yeast fermentation. As the specific loaf volume is the ratio of loaf volume and loaf weight, with the increase in loaf weight and decrease in loaf volume, specific loaf volume had shown decreasing nature. Significant difference was found at p?0.01 in case of the loaf weight, loaf volume and specific loaf volume among the different treatments as the level of incorporation of FMF was increased.

The mean scores of the sensory attributes of the FMF bread (Table 6) were reduced in comparison to the control bread due to the change in ingredients. The white flour is mainly responsible for the good sensory qualities of the bread due to presence of gluten which is not present in the FMF.

At last, it is concluded that Finger Millet Flour can be used in bakery products. The bakery products are generally prepared from white flour, but to its low fibre content, it leads to constipation and stomach problem for the consumers. Use of FMF in bakery products such as bread can be found as utilization of underutilized Finger Millet and also prevent the problems of constipation as well as a rich source of calcium and other phytochemicals. Due to the absence of gluten protein in FMF, the use of FMF in white bread was limited to 20% considering acceptable physical, rheological and sensory quality however the FMF fortified bread was far superior to control bread. The composition of the bread prepared with 20% FMF was found to have Carbohydrate 59.55, Protein 6.0, Fat 4.60, crude fiber 0.65 and ash 0.79%. The white bread enriched with the Finger Millet had higher crude fiber and calcium control bread and thus may be a healthy option for the people doing weight management and for the prevention of constipation and colon cancer.