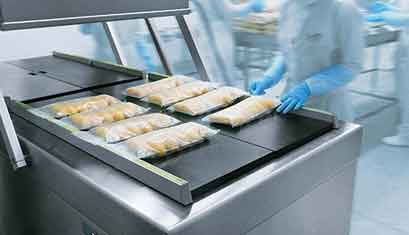 Introduction
Convenient packaging should not only define convenience but also posses many qualities like, it also extends shelf life with barrier properties and maintains the food organoleptically acceptable. It incorporates frustration-free tear or opening features and minimizes chemical or  physical deterioration. It creates infestation-free protection and reduces costly returns.

There are many challenges to solve the above mentioned purpose like, to preserve at best the quality of food products as well as increase shelf life of food products. Maximum protection to food products from environment should also be provided. Reduction of cost also matters.

Convenient packaging can be classified by the following way: Resealable package, pouches and bags, lidding films and shrink films.

Easy-Open/Reclose (Resealable) Package-  It improves overall package functionality and enhance consumer convenience because it provides frustration free alternative which is easier to open, pour and store.

Pouches and Bags– Easy to store and pour. It is available in individual pack. It is ideal for sauce sachet, butter cubes, milk pouches.

Shrink Films- These are of following types-

Characteristics of shrink films- It optimizes for high-speed operations and gives outstanding strength and durability.

Benefits- These are sustainable, economical multi-pack, ideal for replacing corrugate, paperboard and plastic rings for PET bottles, aluminum cans and more. It reduces packaging material more than 50% by weight lower the costs as much as 30%.

Flexible packaging for convenience Aluminium foils- It provides superior product protection. It has high strength alloys for high speed machine wrapping. It can be laminated to paper or plastic films using wax or adhesives. It can be reversed side coated in a heat sealable lacquer. It is supplied in reel or sheet form. It can  be  embossed  with sophisticated patterns and specific logos.

Paper- A range of confectionery wrappers includes a wide variety of printed specifications and in some cases, combination with other materials. Printed and wax coated papers are available for twist  wraps  pre-made bags in paper and paper/plastics combinations.

Packaging for maintaining and enhancing nutritional value of food Edible films and coatings- Edible films are defined as a thin layer of material which can be consumed and provides a barrier to moisture, oxygen and solute movement for the food. The material can be a complete food coating or can be disposed as a continuous layer between food components. Edible films can be formed as food coatings and free-standing films.

Type of edible films and coatings-

Composition of hydrocolloids- These are water based colloidal mixtures of proteins and/or polysaccharides.

Properties- It has poor resistance to water vapor but provides barriers to oxygen & carbon dioxide it has mechanical strength.

Bilayers- In which one layer is deposited over another layer.

Conglomerates- One layer includes a mixture of several components. It is again of two types- Components distinct and Components intermixing. For instance, lipids provide a barrier to water vapor movement and hydrocolloids provide the supporting matrix. So, the film having both properties is composite films. Another example is films of casein and acetylated monoglycerides which are effective barriers to water loss in fruits and vegetables.

Emulsifers – Keep the components in solution.

Surfactants – Reduce the surface tension of the film formulation to achieve uniform coverage.

Active packaging for convenience- Active packaging employs a packaging material that interacts with the internal gas environment to extend the shelf life of a food. Such technology modifies the gas environment and may interact with the surface of the food by removing gases from or adding gases to the headspace inside a package. Recent technological innovations for control of specific gases within a package involve the use of chemical scavengers to absorb a gas or alternatively other chemicals that may release a specific gas as required.

“Packaging in which constituents have been deliberately includes substancein or on either the packaging material or the package headspace to enhance the performance of the package system”. Eg- sachet, flexible tubes etc.

Modified atmosphere packaging for convenience- It is a practice of modifying composition    of    internal    atmosphere    of a package in order to improve shelf life of food product. There is modification in the amount of oxygen which varies from 20.9%  to 0% which slows down growth of aerobic organisms.    Oxygen      is replaced with nitrogen or carbon dioxide,  which lowers pH or inhibits  growth  of bacteria. Carbon monoxide can be used for preserving the red color of meat. Re- balancing of gases inside packaging can be achieved using active techniques such as gas flushing and compensated vacuum or passively by designing “breathable” films known as equilibrium modified atmosphere packaging (EMAP).

Characteristics of packaging films for EMAP

Barrier films are designed to prevent the exchange of gases and are mainly used with non-respiring products like meat and fish. Permeable films are used for fruits and vegetables.

When it comes to convenient packaging, the keys to remember are that allowing the consumer the easiest possible path toward choosing your product is often the best one. Allow smaller sizes and different flavors so that consumers have options. Provide packaging that helps consumers stay healthy without harming the environment to ensure sustainable outcomes for our future generation.

The Packing industry is going through the most substantial transformation in many years. From milk, ice creams, coconut water to wines and spirits everything is available in paper-based packaging. Companies have realized that packaging needs to add value to the product in order to stand out among competition. Living ahead of the curve, Tetra Pak’s paper carton packaging has been the most wonderful invention of all times. The development of the  Tetra Pak  package and the aseptic packaging technology made it possible to eliminate the cold chain supply for distribution and storage, substantially increasing access in the remotest parts of the country and even overseas.