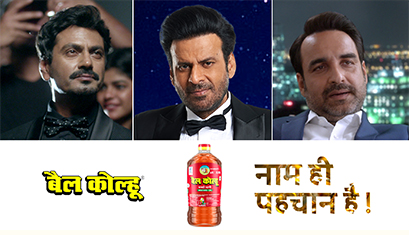 The latest TVC for ‘Bail Kolhu’ Kacchi Ghani Mustard Oil is a thought provoking, emotional and stylish montage embellished with success stories of three outstanding actors in their own goose-bumpy voiceovers. The film underlines the Brand values of Bail Kolhu, which are perseverance,purity and dependability and remaining grounded despite achieving great heights. It portrays the “sons of soil” image in an insightful & inspirational manner.

NOIDA, Uttar Pradesh, India, May 3, 2021: BL Agro Industries Limited, one of the fastest growing edible oils and food products company in India, has launched its new television commercial, featuring the power-packed trio from the movie ‘Gangs of Wasseypur’, to promote the 50-year-old brand, ‘Bail Kolhu’. The ad revolves around the life stories of the three actors – Manoj Bajpayee, Nawazuddin Siddiqui and Pankaj Tripathi, who came out of the grind to become somebody from a nobody. This only became possible because of their hard work, grit and determination and their commitment to deliver the best – characteristics that resonate with the values of ‘Bail Kolhu’ – the brand that started with a humble beginning but today, has made a distinguished name for itself.

The TVC created by Leads Brands Connect, a multi-dimensional creative agency, has been launched on the national television channels and plans to roll out the 360-degree communication through print and digital media in the coming months. The company also rolled out its social media campaign on Facebook, Instagram, Twitter and LinkedIn.

Speaking on the launch of the TVC, Mr. Ghanshyam Khandelwal, Chairman & Managing Director, BL Agro said, “Bail Kolhu is the company’s flagship product. With over four decades of supreme taste and consistent quality, Bail Kolhu enjoys a leadership position across many markets. The success of Bail Kolhu is the result of many decades of hard work as well as our commitment to deliver only the purest mustard oil. Just like the real-life stories of our brand ambassadors, the journey of Bail Kolhu started from a very small scale, went through hardships and faced many challenges in its journey. But, with passion and determination, it managed to reach the position where it is today.”

Talking about the different creative approach of the TVC, Mr. Sanjay Srivastava, CEO, Leads Brand Connect said “It’s unlike any other cooking oil TVC you will find in the country. Firstly, it has a multi-starrer male cast which is unseen and unexplored in the category. Secondly, it’s very focused on the brand personality rather than sales promotions. You will hardly see any oil shots or cooking shots in the film. The strategy was to celebrate the iconic image of the brand and thus the entire tonality was created around what the brand has achieved over the years.”

“Bail Kolhu has created a niche market in Uttar Pradesh, Uttarakhand, Delhi NCR and parts of Rajasthan, Haryana and Punjab. The company now plans to set its footprints in Bihar and Jharkhand, where it is currently looking to establish a very strong distribution network”, adds Mr. Khandelwal.