A Thanks to Cows for their Milk and Meat 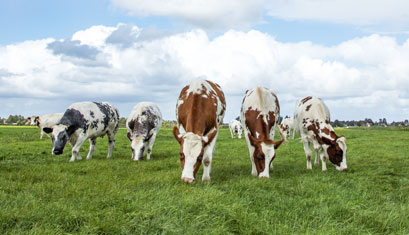 There’s been an overwhelming amount of conversation regarding veganism and eliminating milk and meat from the diet. What so many fail to recognize is that humans need cows to keep us from starving. That’s right, without cows and other ruminant animals, such as goats and sheep, many would go hungry.

Of course, we should all be eating more fruits and vegetables, preferably in their whole, minimally processed form. But milk and meat are important, too, and they are produced even in the winter when plants cannot grow.

These plants are basically sources of cellulose. In fact, half of all organic carbon on earth is tied up in cellulose. Humans are not able to use this carbon for energy. Ruminants can, and they do so very efficiently.

Ruminants digest cellulose and convert it into foods that humans can eat. They make all of that organic carbon that cannot be digested by humans available to humans in the form of high-quality protein, essential fatty acids such as omega-3s and conjugated linoleic acid, and an array of other nutrients. Milk, for example, provides calcium, potassium, phosphorus, protein, vitamins A, B2, B3 and B12.

Think about a stalk of corn, which provides two to three cobs. Humans can only digest the kernels, and for that matter, not even all of the kernel. The fibrous outer shells of corn kernels pass through the gastrointestinal system undigested due to lack of the necessary digestive enzyme. The rest of that corn plant is useless to humans for energy; however, it’s a meal for ruminant animals such as cows. Cows effectively convert the nutrients in that stalk, husk and cob to meat and milk for human consumption.

This is why we need ruminant animals to feed the projected 9.7 billion humans who will inhabit earth in 2050.

Humans are omnivores. We are animals that have the ability to eat and survive on both plant and animal matter. Animal nutrients are powerful. The bear, also an omnivore, gets it. When they are foraging the forest and dining on berries and leaves and see a salmon swimming nearby, they ditch the plants and go for the animal nutrition. Bears are smart. They understand the power of high-quality animal protein.

* Author is a food and beverage industry consultant and editor with over 25 years experience in tracking trends and advancements in product development. She lives in Chicago with her family.