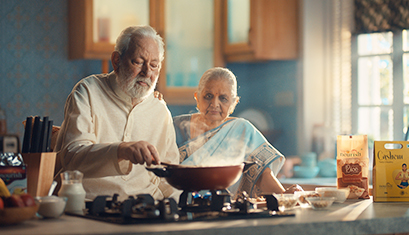 This year in March, BL Agro introduced a revolutionary concept, normalising that cooking is not a gender-specific role with its #RasodeMeinMardHai campaign. With Raksha Bandhan around the corner, the company wanted to utilise the festival to build upon this initiative that smashes right through the preconceived notion that only women must shoulder all kitchen duties.
This time the company wanted the world to view the concept from a different lens and from the perspective of a lifetime’s bond of love between a brother and sister. To that end, it launched a digital campaign for its brand Nourish titled #UmarBharKaVaada. The campaign, heart-warmingly endorses both the men-in-kitchen cause and the sanctity and purity of a sibling bond and punches a strong emotional quotient. The campaign, #UmarBharKaVaada is going live from August 9 on all social media platforms such as You Tube, Facebook, Twitter, Linkedin, Instagram, Sharechat and DTH.
It opens with a very familiar scene. An elderly brother is reminding his sister to come home sooner for rakhi and then adroitly segues into him cooking kheer, the sister’s favourite sweet dish. With script lines such as “usko mere haath ki hi pasand hai,” “yeh toh bhai-behen ka pyaar hai” and “pehle se bhi bahut achi hai,” the soul-stirring ad not only demonstrates that men should cook too. It also tells the story of how long the protective relationship of siblings lasts, plucking at an emotional heartstring.
“When we launched #RasodeMeinMardHai, we knew it wasn’t going to be a one-off campaign. The vision was to advocate it repeatedly, making it a norm for people to see men cooking. So, the crux of our Raksha Bandhan campaign was already in place. What we needed was some blue-sky thinking to tie in with the core value of the brand Nourish – “nutrition ka vaada”, says, Ashish Khandelwal, Managing Director, BL Agro.
“Leads Brand Connect captured this vision fantastically with #UmarBharKaVaada. The execution was equally brilliant, drawing a parallel between flavours and bonds. Just like certain flavours and tastes leave a permanent and unforgettable mark on our hearts, the connection of a brother and sister is eternal,” adds Khandelwal.

Leads Brand Connect CEO, Mr. Sanjay Srivastava, said, “BL Agro is a brand that has always disrupted the status quo. This time was no different. Convention dictates that ads rope in young actors, but when we pitched a quirky old man with just a slightly younger sister, they were completely on board. Our idea was to make Raksha Bandhan this year a memorable experience for elder siblings too and pay tribute to brothers and sisters who truly have kept the promise to protect each other for a lifetime. Hence, the hook – Kuch swaad hamesha ke liye dil mein bas jaate hain. Kuch vaade umar bhar nibhaaye jaate hain.”
The campaign was ideated, scripted, and filmed by Leads Brand Connect.
To watch the #UmarBharKaVaada TVC, https://youtu.be/_Uvbbj8YRns