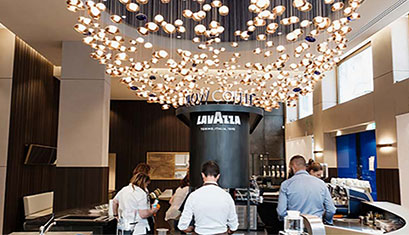 October 1 is International Coffee Day, an event launched in 2015 by the ICO (International Coffee Organization) to celebrate the world’s best loved drink. For this important anniversary, Lavazza has decided to work with extraordinary French-Swiss artist Saype who, with his Beyond Walls project, has teamed up with the company to promote the shared values of solidarity, humanity, social responsibility and openness to the world.
This is the message the project intends to send out, one of kindness and optimism translated symbolically into the creation of the biggest human chain in history, in the form of extraordinary, gigantic frescoes on grass depicting pairs of hands reaching out and joined in a forearm handshake, in a common effort to overcome all walls that separate people and keep them within mental or geographical confines.
Beyond Walls is a long-term project launched in Paris in 2019, at the foot of the Tour Eiffel no less, and which has so far touched on Andorra, Geneva and Berlin but will be reaching out all over the planet, city by city across five continents (over 20 cities). It arrives for the first time in Italy (7th stage) on October 1, where in Turin’s Porte Palatine archaeological park it will be able to draw on the city’s powerful cultural identity.

This emblematic project that marks the rebirth and cultural restart of Lavazza and the city of Turin is a perfect fit for the concept of #TheNewHumanity, which was coined by Lavazza in May during the global health emergency (as well as being the claim of the company’s ad campaign).

Like Saype, firmly convinced that “only together can we deal with the biggest challenges of our times”, the company too is guided by its sense of responsibility, believing we must recognise that we are all part of a single, connected and balanced global ecosystem. It also invites people to look to the future with optimism and confidence in a newfound humanity that will make progress, sustainability and tolerance the foundations of its rebirth. A concept – #TheNewHumanity – that pervades all the group’s various initiatives, in a coherent and integrated journey that includes the 2021 Lavazza Calendar, which this year becomes an all round art project calling on photographers, artists and intellectuals to contribute to a movement that will plan a roadmap for the birth of a new humanity and will be launched at the beginning of November.