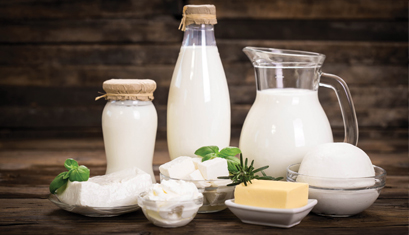 A comprehensive analysis of the dairy food industry of Indonesia is provided by a new report by Ken Research.
The report also covers overview and genesis of the industry, overall market size in terms of revenue and sales volume, market segmentation by product types and by distribution channel.
Detailing on drinking milk products, condensed milk products, yogurt and sour milk products, ice cream and frozen desserts, cheese, cream, butter and spreads, coffee whiteners, trends and developments and issues and challenges, regulatory landscape, SWOT analysis and comparative landscape including the competition scenario, pricing analysis, cross comparison, strengths and weaknesses and company profiling of major dairy food manufacturers.
The report concludes with future market projections on the basis of revenue and sales volume, by product type and distribution channel and success case studies highlighting opportunities and cautions for both existing as well as new players.
Indonesia Dairy Food Market Overview and Size
Indonesia dairy food market grew at a volatile growth rate over the review period 2013-2019 and was further supported by increase in health awareness among the consumers, introduction of new product and flavour variants in the dairy market, affordable pricing and others.
Expansion of large scale integrated dairy farms in Q4’2017 led to increase in fresh milk production from 633 million litre in 2017 to 659 litre in the year 2018.
The dairy processing industry used 601 million litre in 2017 for a variety of products including pasteurised and UHT liquid milk, powdered milk, yoghurt, butter, and cheese.
Entry of several foreign players have also contributed towards the same coupled with growing snacking trend in the country.
Smaller or single-serve primary packaging products saw increasing demand and remained more popular and common in yoghurt than large or family-sized formats.
Indonesia Dairy Food Market Segmentation By Product Type
(Drinking Milk, Condensed Milk, Yoghurt and Sour Milk Products,
Ice-Cream-Frozen Desserts, Cheese, Cream, Butter & Spreads and Coffee Whiteners)
Strong growth was observed in the drinking milk industry majorly due to increasing consumption of milk coupled with rise in milk imports.
Generally, all live dairy cattle are imported from Australia, which is the only country with live dairy cattle import protocol with Indonesia.
On the other hand, some local dairies augment their breeding programmes with genetics imports from the US.
Drinking milk segment held a higher share in 2019 owing to the consumption of fresh milk as a raw product for other dairy food segments.
Whereas on the other hand, coffee whitener held the lowest share in the market due to its low product awareness in Indonesia.
Indonesia Drinking Milk Products Market
The drinking milk products market was observed to be in its growing stage alongside witnessing massive growth over the years.
Retail channels including hypermarket and supermarket chains were the most prominent distribution channel for the milk products segment.
It is further classified into flavoured milk drinks, powdered milk, liquid milk, and other milk alternatives.
Launch of newer products like Homesoy, Blue Diamond Almond Breeze and Hershey’s Soy Fresh in multiple flavours including Cookie’ Cream.
Fonterra supplied 88.0 thousand metric tonne of milk, including 24.0 thousand tonne of powdered milk, 23.0 thousand tonne of skimmed milk powder, and 13,000 tonne of cheese in the year 2019.
Competition stage was observed to be moderately fragmented with major players competing on the basis of quality, pricing, product variety, and other factors. Major players include Nestle, Royal Friesland Campina, Greenfields and others with Nestle leading the market in terms of sales revenue by value in 2019.
Owing to their higher availability, production, and increase in product listings on E-commerce platforms, the online sale of drinking milk products is expected to grow over long term.
Flavoured milk drinks are expected to dominate in future along with maximum CAGR both in terms of value and volume during 2019-2025.
Indonesia Condensed Milk Products Market
Condensed milk products market was observed in its early growing stage alongside witnessing stagnant growth (value and volume) over the past few years due to stringent regulations imposed by the government.
The market is further segmented into plain and flavoured condensed milk products.
Companies are also appealing to the price-sensitive nature of Indonesians by offering them lower-cost SCM products and creating more brand awareness on the side. Competition within the condensed milk products market was observed to be highly concentrated with major players competing on the basis of pricing, product variety, and other factors.
Some of the major players include Royal Friesland Campina, Indofoods, and others with Royal Friesland Campina leading the market in terms of sales revenue by value in 2019.
Increasing focus of manufacturers towards introducing new flavoured variants of sweet condensed milk; causing shift from plain SCM in the near future. However, plain SCM will still dominate in the future.