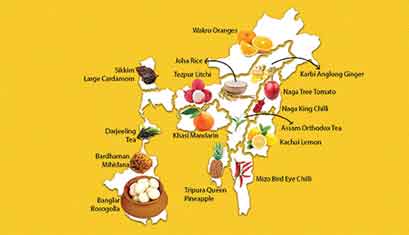 North Eastern Region of India is the hub of organic and exotic agro-horticultural produces. Region is characterized with diversified agro-climate conditions i.e. favorable environment conditions to produce multiple crops. Rich water resources, fertile land and soil to produce quality crops are the strength of the region. NE Region comprises of eight states and is a basket full of opportunities for the unusual and the special spices and herbs. Most of its productions are naturally organic and has enormous potential now and is expected to grow more on the post-covid resurgence when there is a demand for organic, all natural, traditional vegan, immunity foods, high protein foods, functional foods and nutraceutical.

GI (Geographical Indication) is a form of intellectual property right, which provide exclusivity and legal protection to a product in a defined geographical area. It helps a community of producers to differentiate their products in the market and build goodwill, which often fetches a premium price. For the consumers, GI act as a stamp, which help them to identify genuine quality products. India enacted the Geographical Indications of Goods (Registration and Protection) Act, 1999 and the act came into force on September 2003.

Geographical indication is given to identify agricultural, natural or manufactured goods, which possess certain special qualities or characteristics based on the climatic or production conditions unique to a geographical location. GI registration is an initiative to preserve and promote the bio- diversity of the region and it also helps farmers secure better remuneration for their produce. Interestingly, this region of India already has as many as seventeen agro-horticultural products from across the eight states with the coveted GI tag, thus giving them the much-needed recognition that these belong exclusively to the region and are legally protected from being produced, processed and value added elsewhere.

As of September 2020, out of the 370 GIs on the list released by Gi registry Authority, 29 (twenty nine) are from the Northeast. Out of which, 17 (seventeen) products are from agri-horti sector. The list of products includes Arunachal Orange (from Arunachal Pradesh), Assam Orthodox Tea, Tezpur Litchi, Assam Karbi Anglong Ginger, Boka Chawl, Joha rice of Assam, Kaji Nemu, Chokuwa Rice (from Assam), Kachai lemon, Chak-Hao commonly said as Black Rice (from Manipur), Khasi Mandarin, Memang Narang (from Meghalaya), Mizo Chilli commonly said Bird’s Eye Chilli (from Mizoram), Naga Chilly commonly known as Bhoot Jalakia, Naga Tree Tomato (from Nagaland), Sikkim Large Cardamom (from Sikkim) and Tripura Queen Pineapple (from Tripura). These produces are now expected to bring better fortune for hundreds of farmer families across the region. Besides above, Tamenglong Orange and Sirarakhong Hathei from Manipur and Dalle Khursii from Sikkim has also been listed and it is expected that GI certificate will be issued for these three crops by next 120 days as per norms of the GI Authority. Another seven applications have also been filed and are in the pipeline.

These farm produces unique to locations in the NE region having GI tag can facilitate and allow the farming clusters to go for more production by increase in the volume of production, thereby increase in earnings both in fresh as well as value added forms. It is envisaged to help the producers substantiate their claim in fetching remunerative price to their exotic produces and thereby raise the economy of the region and become Atma Nirbhar during the time of this pandemic and also on the post-covid resurgence with its organic nature.

With the GI tag, a consumer can be rest assured that the product is authentic, genuine and finds it origin. Once the GI Tag is assigned to a particular product, no other product can carry the tag or the same name and thus it offers legal protection against free market malpractices. Even the logos of the GI registered products are also approved by the Authority and pit in the label. On the other hand, this procedure also helps open up the markets for the farmers of the particular region, enhancing the possibility of improving their revenue. Besides, many a time, the middlemen falsely tag sub-standard products, but with a GI tag, farmers also can be assured about their produces / products that will get first preference and even fair price. Moreover, GI tags help the farmers and producers in a big way for branding, marketing and protecting the exclusive, special local crops as an identity of the products; but also help in further propagation of GI for many more such crops. GI tag can thus substantiate the present slogan of Vocal for local for the benefit of producers.

NE Region has already six numbers of Mega Food Parks and three Agro-processing Clusters in different states of the region at different stages of its operation. Besides, Govt of India’s Atma Nirvar Abhiyan schemes are aimed at giving huge support to the entrepreneurs of the region to make value addition & processing through One District One Product (ODOP) program where Government of India has earmarked to support 20,000 number of units jointly with the state Governments in the north east and many of them can take the advantage of utilizing the GI tagged products resulting into increase in demand and thereby boost the production of these products in the respective area of operation in the region.

In the north east, due to difficult logistics and terrain, end to end marketing is a huge problem even today. With the GI tag available for seventeen crops by now and few more in the pipeline, there will be a great advantage where the product as well as the farmers cluster will get its heritage. Moreover, by creating Pack Houses and processing facilities among the growing clusters of GI tagged crops, considerable employment can be created in every activity of pack houses like sorting, grading, packing etc. As well as processing and will allow these clusters reap both in getting value of their produce as also involving the rural mass with better employment opportunity.

GI tag will enable to widen the marketing network and thereby able to support the producer clusters of these crops more vigorously. However, it needs to be motivated by drafting a definite proposal in the form of a road map meant for necessary augmentation and improvement in the agricultural marketing management of these products from the north east. There is also a need to come up with a long-term plan to encourage and support more farmers to grow these crops and also support them by linking them to the market both within the country and outside. There is an immediate requirement to promote commercial cultivation of these of crops, and provide market linkage.

As a post registration follow up of GI, promotion and continuous awareness building particularly among the consumers is very important. Proposals need to be initiated to organize events for promotion, branding and marketing of GI tagged products including road shows across PAN India and even abroad. Special events, theme based events and meet of trade counsellor of many countries etc. are also needed to be organized. It is observed that though already seventeen agro-horticulture exotic produces from the north east has got the coveted GI tag, its marketing and promotion efforts are still lacking. All these require sustained commitments of resources as there is a constant need for capacity building and awareness about GIs among various stakeholders including consumers. Govt of India has formed a special Ministry of Development of North East Region to promote and monitor the regional development, such promotional initiative can well be made through the Ministry of DoNER (Development of North Eastern Region), Govt. of India or through the NEC (North Eastern Council) in order to facilitate and bring up phenomenal change in the commercial horticulture in the north eastern region. Outcome of these in terms of focused marketing possibilities will bring due importance in the farmers production in the region and will be effective in doubling farmers income and will certainly become a positive intervention.

The author is Former Managing Director, NERAMAC Ltd, Ministry of DoNER, Govt. of India, Guwahati and can be reached at subhasbh@gmail.com