American Side to iIntroduce Their American Weekend Menu. 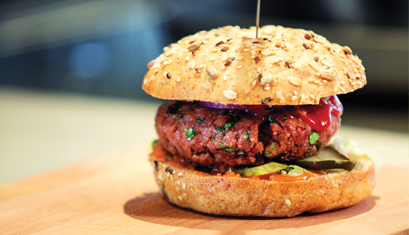 After having successfully nailed their Cheetos menu, the brand dug into the American side to introduce their American Weekend menu. The menu toasted the glorious flavours of its namesake’s culinary landscape giving the customers the perfect New York cheesy burger experience.

The brainchild of Sahil Lulla, his wife Kresha Lulla and brother Nikhil Lulla, the home deli can be credited with the first-ever DIY burgers that the city of Mumbai has ever witnessed. Designed to be put together on one’s own, the ingredients are provided in clearly labelled packaging so that everyone can construct their own gourmet masterpiece.

The spirit of innovation also extends to the menu itself, as the trio has swapped the conventional set menu in favour of limited-edition pop-ups that are refreshed every fortnight. One of them being the American Weekend that was a gourmet delight and treat to people’s palate.

Having previously worked at the prestigious Atlantis Dubai, Sahil Lulla and his family chose to spend the extended lockdown by giving free rein to their creativity in the kitchen. The result is a home deli that creates innovative offerings in keeping with the highest standards of sanitisation.

In light of the ongoing health crisis, the meals are prepared and packaged in a home kitchen that follows the highest measures of sanitisation. As an added precautionary measure, the chefs have limited non-essential travel outside the house.

Furthermore, the home kitchen serves as a pick-up service with a single point of contact to avoid having the parcels exchange multiple hands