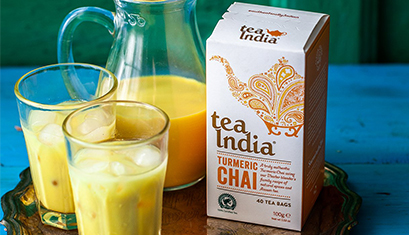 Tea India has expanded its chai tea portfolio with the introduction of Turmeric Chai in Waitrose stores across the UK.

The company’s latest offering features a base of black Assam tea with 40% turmeric, along with ginger, fenugreek, galangal, cinnamon and India psyllium.

Turmeric Chai can be used to create a traditional Indian drink, golden milk or otherwise known as Haldi ka Doodh.

Using one teabag per person, consumers are said to infuse the bag in simmering milk – oat, cashew and coconut are recommended – for three to five minutes and to add honey to taste. Alternatively, Tea India suggests its Turmeric Chai can be used to create iced tea.

Described as having a ‘luxurious colour’ and ‘aromatic flavour’, golden milk has historically been used in Ayurvedic medicine as a remedy for sore throats or as a comforting drink to help people sleep.

“Our new Turmeric Chai is another delicious and authentically India blend to complement the Tea India range. This can be drunk as an infusion or simmered in milk or a plant-based alternative for a coffee shop Turmeric latte experience,” said Lisa Worthington, head of marketing at Tea India.

She added: “Tea India Turmeric Chai is perfect for 11’s, an afternoon treat or a bedtime relaxant. At approx. 6p per teabag this is a very cheap everyday treat.”