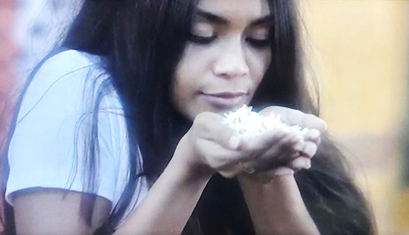 Gastronomist, an NCR based cloud kitchen, launched a unique national film on Kolkata style Biryani, as part of a broader multi-series campaign – ‘Banglar Baireo Bangaliana’ (maintaining the Bengali legacy outside of Bengal), on the auspicious day of Poila Boishakh (Bengali New Year Day). This film, centred around the classic Kolkata style biryani that comes with the quintessential alu, is the first in the series. The film aims to trigger the emotional quotient amongst Bengalis who stay away from Bengal and miss some of their favourite food from the state or the city of joy.
The film shows a young girl, Megh, from Kolkata who has relocated to Delhi for her new job just before the Durga Pujo festivities, undergoing a melancholic moment as she misses her family, friends for the first time during the festival. Attending office and compromising holidays was a first in her life, as she grapples with her routine in the new city. So much so that she is unable to enjoy the new dresses her mother has lovingly sent her. A friend turns out to be a good Samaritan and invites Megh to one of the few community Pujas and also insists her to attend the traditional bijoya sammilani celebrations (a get together of friends & family after Goddess Durga is immersed) that follow the Bijoya Dasami. Megh attends the get together with hesitation as she walks into mostly unfamiliar faces. But soon, she is made to feel at home by the hosts and the Kolkata style biryani served during dinner was the ultimate ice breaker. She’s served with her favourite Kolkata biryani that brings back her Kolkata memories of joy, fun and festivities. The film has been shot at the backdrop of Sharodotsav and coincidentally the launch aligns with the time of Basanti Durga Pujo and poila boisakh.
The link to film is live on: https://youtu.be/MpAi-JRkFF8
Meghlayana Banerjee, who plays the protagonist by the character Megh, said, “home can be many different things, a place, a sound, a smell, a person, or a group of people. It is a feeling, an emotion! And so, when you combine Durga Pujo, Kolkata biryani WITH deem and aalu, and the warmth of a passionate team, “home away from home” comes right to you.”
Through this campaign, the idea was to reach out to the population with Kolkata or Bengal lineage who miss their comfort food out of their hometown. While the focus has been on those from Bengal, the aim is also to popularize Kolkata style biryani, a hidden gem, in other parts of the country. The campaign comes at a moment when PetPuraan is planning a national expansion to other metros like, Bengaluru & Mumbai.
Mrs. Keya Guha Roy, who plays the character of Megh’s mother, said, “Working with this dedicated band of kids in this project was a delight. It was unique and portrayed simple emotions of to life. The way of portraying some of these emotions that are typical of a Bengali household particularly during Durga Puja or occasions like poila boisakh made me nostalgic. It was fun being a part of the project. “