Bikano Launches Bhujia Campaign to Solidify their Position in the Market 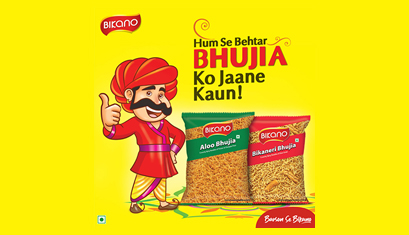 The namkeen and snacks market in India is valued at about Rs 35,000 crore, and over the recent past it has been witnessing plenty of growth and continues to expand. The increased sale of traditional snacks like bhujia, sev, and mixtures has significantly contributed to the growth of the sector. Capitalising on the same, Bikano’s objective is to penetrate the market further by foraying into newer distribution channels and strengthening their existing channels of distribution.

Manish Aggarwal, director, Bikano, said, “Bhujia is made across different parts of the country however, compared to the usual bhujia which is prepared from besan (gram flour), the Bikeneri bhujia is prepared from ground moth lentils. Dipped in the authenticity of original Bikaneri bhujia, we are eyeing to expand the realm of our offerings by channelling energies towards entering newer sales and distribution channels. We’ll also be maximising the potential of digital and other relevant promotional mediums to ensure seamless presence and capture the market share.”

“Bhujia is one of the products which have been part of Bikano’s culinary legacy since the beginning. The market share of the Bhujia and Sev category is 25% of the traditional snacks market in India and we are expecting a considerable sales surge in the bhujia category,” he added.

“Bhujia not only is in demand in the domestic market but there’s an ever-rising customer demand across several international markets. It is currently exported to all our major international markets like the US, Canada, Europe, Gulf countries, Australia and New Zealand.” said Aggarwal.

Speaking about the campaign, Dawinder Pal, head of marketing, Bikano, said “Bikaneri Bhujia, defined by its light yellow texture, delightful crunchiness and true Bikaneri flavour, invites people of every age group and is most likely to invite for years and years to come. At Bikano, we imbibe the spirit of Bikaner that reflects the true taste of Indian culture. Crunchy, rich tangy flavours merged with spicy flavours makes our Bikaneri and Aloo Bhujia a mouth-watering snack to munch on any time of the day. With the tagline – ‘Humse behtar Bhujia ko jaane kaun’, we want to establish Bikano’s authority in bhujia manufacturing and take the position of Bhujia specialists in the market.”

“Bhujia has been our legacy and the consistency of our brand with the hygiene and taste factor ultimately makes our bhujia stand out from the competition,” he added.

“The campaign is planned to be rolled out across the channels and we’ll be utilizing all ATL and BTL activities for communicating with our patrons. Aloo Bhujia and Bikaneri Bhujia are among the substantial contributors in the namkeen segment for us. Also, looking at the current situation, we as a brand are solely focused on value creation that will help us thrive in the market. We are also expanding our bhujia portfolio. Recently, we launched Aloo Bhujia Lemon Chaska, a new variant with differentiated taste,” said Pal.